Authorities in the Northern Italian province of La Spezia have seized 50,000 counterfeit wheels, reportedly worth over 20 million euros. 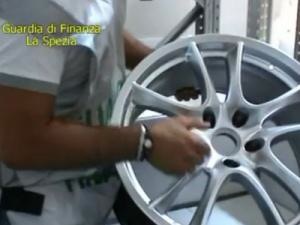 The local Guardia di Finanza seized the products deemed to be hazardous to the safety of motorists, having intercepted them on the way into the market from China. In addition to the wheels, police also seized 100,000 accessories featuring logos of car manufacturers and 400 molds allegedly intended for the production of knock-off wheels in Italy.

A number of firms based in north-central Italy implicated in importing the products from China have been reported.

Local law enforcement agencies are said to have to come across the wheels during a random audit of the truck carrying them. The investigation then continued with inspections across the country. The rims were evaluated in terms of material make up, size, structure and strength.

According to Tyres & Accessories’ Italian sister publication pneusnews.it, the counterfeit wheels not only violate the intellectual property rights of the originators, but are also said to be “very dangerous for the safety of motorists.”

To illustrate this point the Supreme Court has already verified that the seized wheels have substantial differences in size and structure compared to the original authentic products, which end consumers would not notice.

Now that initial stages of the investigate which led to the confiscation of the wheels and molds is complete, the authorities are said to be focusing their enquiries on the observation that the alloy wheels in question are reproductions of those supplied by major OEMs (including Mercedes, BMW, Fiat).

In addition to violating the intellectual property rights of these major automotive players, the capture of the counterfeit products is likely cause concern at the carmakers because although identical in appearance with the same hub attachment as the originals, the seized wheels have been found to be substantially different in size, while failing to meet construction requirements recommended by the vehicle manufacturer.

Pneusnews.it reported that the wheels fail to make effective use of the right alloy materials and don’t share the OE-specified load carrying characteristics, which are essential to avoid interference with the steering, tie rods, brakes and transmission.

Consider the example of a modern SUV equipped with a defective rim such as the wheels described above. With sub-standard wheels a simple but life-saving maneuver such as braking at motorway speed or accidentally hitting a pothole has the potential to cause the loss or fracture of a wheel.

While the companies at the center of the case have yet to be named, lawyers for the firms involved initially filed for the wheels and molds in question to be released from seizure, an application which was rejected by the prosecution.

However, further legal arguments appealing against the detention orders presented at the Court of Review were said to have been accepted. This led to the case being heard by the Supreme Court, which agreed that the corresponding models registered by the car manufacturers are substantially different in size and structure. Because these differences are said to be present in a way that cannot be perceived by the customer, the courted ruled that they generate uncertainty worthy of investigation in courts of law.

"It’s a success for quality and compliance with the rules," said Corrado Bergagna, president of the Italian wheel manufacturers association Assoruote, explaining that the investigation was carried out exclusively by the police, but with cooperation (such as the technical requirements for the safety of aluminium wheels) from Assoruote. "It’s the first time that the Guardia di Finanza has looked not only at counterfeiting, in itself a crime, but also at quality," said the president of Assoruote, an association, which, although founded only two years ago, has already managed to become something of institution in its field.

Meanwhile checks for fake wheel products continue, according to Lt. Col. Gianfranco Zarro, commander of La Spezia Guardia di Finanza: “Indeed they are expanding throughout the country, to guarantee the protection of the consumer, the motorist in this case. The checks are aimed primarily at companies that [have] import relations with China, but we move at times in ports where there are significant discharges of merchandise."

He had this advice for those dealing in tires and wheels: "Operators are a key link in the chain must be very careful what you buy. The products, even if derived from [abroad], must always be traceable…in order to find out who produced [them] in case of problems." (Tyres & Accessories)