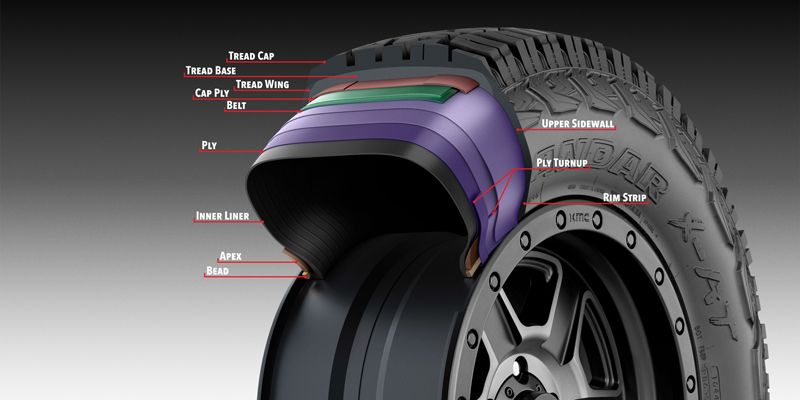 The majority of tire companies go to the same place(s) and purchase similar materials (at least for the most part). Then, they go back to their factory and both will produce different tires.

Think of tire building like cooking a meal. You go to the market, search for the right ingredients and buy everything you need. This goes for great cooks and not-so-great cooks alike – both will go to similar places and purchase much of the same materials. Then they both will go home and one will create an incredible, sumptuous feast, while the other one will cook something that is “meh” at best.

The story of tire making is the same. The majority of tire companies go to the same place(s) and purchase similar materials (at least for the most part). Then, they go back to their “kitchen” (aka their factory) and both will produce different tires.

Depending on the segment, performance expectations and market requirements, different materials will be used to design different tires. These materials will be assembled to form a “green” tire that will be cured into the tire’s shape. Generally, tires are built with seven main components. Depending on the segment and special requirements of each segment, additional component(s) may be added. Figure 1 shows a cutout of a tire section with components, which are described in detail below.

Old tires used a tube to hold air. With the introduction of radial tires, the internal component known as the inner liner was designed to retain air inside the tire. The inner liner can be designed as a sheet(s) of rubber or extruded as a profile for the inside of the tire. The area of higher stretch (shoulder area) requires a thicker level of inner liner to provide the same level of retention. Inner liner rubber is designed in a way to hold high inflation pressure with low air permeability.

While the main purpose of the inner liner is to keep the air inside the tire, it also has a direct effect on tire durability, noise and rolling resistance. In low aspect ratio tires, the inner liner must also withstand high shear strain stresses and a special design may be required.

The tire ply (also known as body ply or carcass) is designed to carry the load caused by the tire’s internal pressure and is made out of layer(s) of textile. This layer(s) is often directed in a radial direction (90°). Occasionally, a small bias angle will be added to the carcass in order to improve the tire’s high-speed performance. The carcass connects the bead to the crown area and transmits forces between these two areas.

While most of the tires use layer(s) of polyester, rayon may be used for high-speed tires (ultra high-performance). Depending on the load index (LI) of the tire, the carcass can have one, two or three plies. Tires on heavy-duty light truck applications, such as mud-terrain and extreme mud-terrain, may use a three-ply carcass. Changing the carcass material and number of carcass layers can influence the radial stiffness of the tire and the rigidity of the sidewall area, which affects the endurance and ride/handling performance of the tire.

The main responsibility of the bead package is to keep the tire on the rim. The bead package often has two components. The apex (also known as bead filler) is an extruded, triangle-shaped thick piece of rubber that is attached directly on the bead bundle. The apex increases sidewall stiffness in the bead area and contributes to handling performance and sidewall stiffness. A higher/thicker apex increases driving stability/steering performance. In most cases, the apex is extruded by one compound, but, in some special applications, may have two compounds. There are also some applications, especially on lower aspect ratio tires, where the tire will be built with no apex. A tire with a higher apex has mass in the lower sidewall area, which leads to conflicting results in high-speed and durability. The second component on the bead package is steel wire. The bead consists of a number of steel cords, which are arranged in a square or circular shape.

The sidewall is an extruded profile consisting of two or more different types of rubbers with different hardness. The upper part of the sidewall protects the inside of the tire (carcass) against any direct longitudinal force (curbside impacts). It’s also designed to withstand UV radiation and ozone cracking. The lower part of the sidewall (rim strip) is normally made of rubber with a thicker durability to protect the tire and provide stability in handling. In normal tire design, the rim strip is wrapped underneath the bead and overlaps the inner liner. The rim strip needs to be designed in a way to assure the correct seating of the tire on the rim.

Belts stabilize the tread area and transmit forces from the contact patch to the carcass. The typical radial tire consists of two layers of steel belts (also known as breakers). In certain applications (some light-truck tires), a third layer of belt may be used. Steel belt layers are calendared with a thin layer of rubber. The layer of belts is located between the tread/cap-ply and the carcass. Belt layers are directed under a specific angle (usually 22°-34°), which is reversed between the belts.

The type of steel cord, number of cords, width of the belt and belt angle have the most influence on tire performance in terms of handling, comfort, durability and wear. Light-truck tires will use heavier gauge belt wires compared to passenger tires due to higher load capacity requirements.

The angles between the belts are consistently shifting due to the movement that goes through the footprint in a rolling tire. Therefore, separation/insulation between the belts, and between the belt and carcass, is needed. Depending on the type of tire and market usage, a different design of wraps may be implemented.

As a vehicle’s load and speed capabilities increase, the tire design has to change. In order to further protect belt edges (the point of failure on a tire), additional layer(s) or a strip of nylon cap-ply (also known as overlay) may be inserted on top of the belt. This layer(s) is located between the tread and the belt in the circumferential direction of the tire. Depending on the application, one or two full layers of nylon sheet or small strips of nylon on both edges of the belts may be used. For special applications, a hybrid material (nylon/aramid) may be used.

A tire’s tread consists of multiple layers of various types of rubbers, which are formed by extrusion. In most cases, a tread is made of three components: tread cap, tread base and tread wing.

The majority of tread is made by an extruder. However some companies are using a tread stripping method, where small strips of tread are applied on the drum.

While tire design is different from company-to-company, application-to-application, Table 3 shows the typical components that go inside of the tire, type of material and common way of production.

While there is an option to design every tire from scratch, engineers have to weigh many different factors to decide on the most important elements to use for a tire’s optimal performance. The standardization of components in factories, the requirements of material due to load, speed and pressure are other deciding factors during the design phase.

Table 4 shows how engineer use the material to design the tire.

So, it’s safe to say tire “chefs” around the globe are constantly testing new ingredients and “cooking” methods to concoct the most tantalizing product — in this case, tires that will go faster, last longer, grip tighter, handle better and be less noisy. Not a simple proposition, but one that requires constant attention to get the recipe just right.