On a cold day in January, Joe Tilford broke ground – after pushing aside a layer of fresh snow – for his seventh Tire Central and Service store in greater Indianapolis. A little inclement weather was not going to stop the celebration for Tilford and his team, especially considering that they have survived the larger chill of the Great Recession. 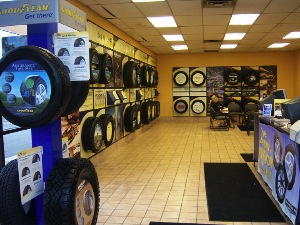 When he opened his own shop as a tire dealer in 1980, Tilford never dreamed of having seven stores. “I always thought it would be one or two, maybe,” he says, recalling his initial ambition. The journey started when he went to work for the Goodyear Tire & Rubber Co. retail stores division after serving as a U.S. Navy officer in Vietnam. Seven years later, Tilford struck out on his own with an experienced technician as a partner.

Tilford knew that opening his own store was what he wanted, but he didn’t know exactly how to do it. Seeking advice, Tilford went to a friend in the tire business in a nearby town who told him, “Here’s what you do.” Clearly, Tilford listened well and took the suggestions to heart.

Seven years after opening the first store, Tilford built his second store, which was followed quickly by a third store in 1988, the fourth in ’89 and the fifth in 1990. In addition to building his own retail stores “from the ground up,” Tilford took over a company-owned store in 2006.

Annual sales for all six stores last year amounted to $6.5 million. Tilford says 40% of the business comes from tire sales and 60% from service, with retail sales accounting for 85% of the business and wholesale 15%. The company that opened its doors 31 years ago with four employees now has 60.

Such phenomenal growth would appear to have been a formidable challenge for an independent tire dealer and a story worthy of a lengthy explanation. But Tilford makes it sound simple. “Once you get two or three going, the formula is about the same,” he says, without fanfare. “It’s a matter of finding a good location.”

The latest store, being constructed on a major retailer’s out-lot, is planned to open this year. The new store is in a suburb where Tilford had no presence formerly, and because the area is growing rapidly and has good demographics, he believes it will be “wonderful.”

A Vendor On-site
One feature being added to the new store is 2,000 square feet dedicated to a satellite office for a preferred parts vendor that Tilford has used for 20 years. “I will have parts right there but they won’t be my stock,” he points out. The vendor, a third-generation wholesaler of tires, batteries and accessories, will have its own entrance and hang its own shingle outside. 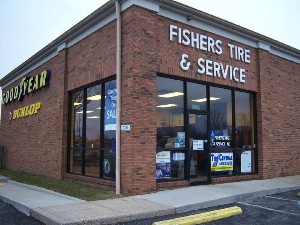 “It will be separate, but having them co-located benefits both their customers and us,” Tilford adds. He has found the vendor, TBA, to be easy to deal with, quick and accurate with statements, and never contentious on warranty issues. The principal benefit for the vendor is in having a location closer to many of its wholesale customers on that side of town.

The Right Mix
What does Tilford credit for his success? With characteristic modesty, he says, “People. That’s always the first ingredient, and I like the product that we sell.” He’s been a Goodyear dealer for more than 30 years now. His business is built on what the customer wants, he explains. “But my core is Goodyear, Dunlop and Kelly tires. We can get other brands for our customers, but if they are wiling to listen, we’ll always go back to that core group. They pretty much meet all the requirements.”

Customers will buy a reputable brand, he notes, “and if they consider us to be fair and competitive, they will buy.”

Brand Building
While Tilford is a strong brand advocate when it comes to tires, he hasn’t always been so when it comes to his stores. Despite having all of his retail locations strategically placed near the interstate highways that circle Indianapolis, Tilford never unified them with one corporate identity until recently. The stores had always included the name of their location, either a suburb or landmark, because Tilford figured that’s what people wanted to know when seeking tires and service, not who owned them.

But he has changed his philosophy and recently put all the stores under the Tire Central and Service banner. Where before he depended on offering good customer service within a three-to-five mile radius of each store and promoting the stores on an individual basis, he now is letting customers know they can be anywhere in the city and find one of his stores – and get the same great service. He hopes that customers who might use one location near where they work will consider using the store where they live as well, now that they will be identifiable as the same brand. 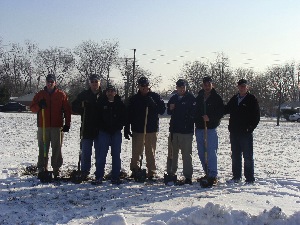 Although the dealership already had been considering the name change, Tilford credits North Central Tire Group, the Ohio-based warehouse distributor with whom he has partnered less than a year, for encouraging the decision. In particular, he mentions Vicki Ricker, North Central Tire Group’s marketing director, for plans to reinforce the new branding with promotions and advertising that will position the company as the place to buy tires and automotive service.

“It’s expensive to do a lot of advertising,” Tilford admits, “but we think it will be worth it in the long run.” To get out the message, Tire Central and Service is concentrating on the Internet and cable television. To promote the new name, the company just completed a commercial that features one of the stores with actual customers and sales people.

Store promotion is not just electronic. In fact, it begins even before the first shovel-full of earth is turned. “You have to do something to make sure the customers know you are there and welcome them,” he adds. For the recent ground-breaking, Tilford reached out to the local chamber of commerce and local business people. “Suburbs are usually particular about things like signage, drainage, appearance and permits, and they want to protect their image,” Tilford notes. “I appreciate that, and I want to be part of that.”

When he builds a new store, Tilford also uses a general contractor, sub-contractors and landscapers in the area. It’s more than a gesture of goodwill toward the new neighbors; these trades-people are potentially among the store’s first customers who can build traffic from their word-of-mouth recommendations.

Spreading Success
Whenever you open a new location, you naturally want it to succeed. How do you translate the success of your best store to the newest one? Tilford says, “I use good people from all of the other stores, and that helps build a reputation without any comebacks or customer service issues. If I can start a new store right and build a good reputation, we’ll do fine.”

Tilford also rotates new hires through all of the stores for a week or so in the hope they pick up the best attributes of each manager, whether it is supervising, customer service or accounting, so that they develop their own way that reflects the best of all.

What about the future? His original partner has retired, and now Tilford has two sons-in-law as general managers that he’s grooming to take over from him. “I’m 63 and looking to cut back,” he says. Besides that, he adds the younger generation has better ideas on utilizing technology and finding business efficiencies. So, what’s next? Maybe store number eight.