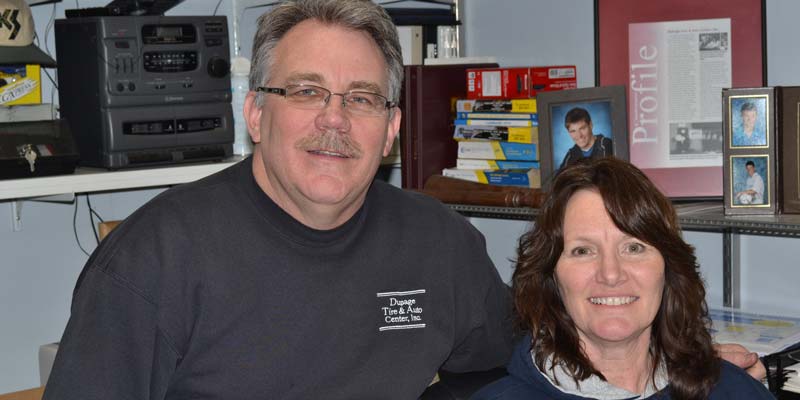 Bob and Debbie Shanahan, owners of Dupage Tire & Auto Center Inc., started their business in October of 1986 in an abandoned Woolco Service Center hidden from the road, located at the back of a shopping mall in Villa Park, Ill.

Recognizing this was no place to find success long term, the Shanahans developed a strategy to focus on service work. The duo quickly built a reputation for having outstanding customer service behind the slogan “if you don’t know your car, know your mechanic.”

It took only six years for Bob and Debbie to accumulate the funds necessary to relocate their business. They chose to build a 6,000-sq.-ft, eight-bay shop just a few blocks away in Lombard, Ill. on Roosevelt Road, one of the main thoroughfares of the city.

Bob says his service-centered approach made sense for his business. He became interested in automotive repair as a teenager and would spend time with his older brother working on cars in the family garage. After graduating from Wyoming Technical Institute with perfect attendance, he went on to work at a Pontiac dealership, but “quickly learned that the technicians at a dealership are not eager or willing to help the new apprentice.”

“When the dealership went on strike, I went to work for a local Goodyear store and never looked back,” he says. “The independent Goodyear store top technician was willing to share his knowledge and experience with [me and help me expand my] knowledge from just Pontiacs to all makes and models.”

To independent shops struggling with today’s technician shortage, Bob recommends focusing recruiting efforts on the closest high school that still has an automotive program for students. For Dupage, that school happens to be in their backyard.

“Seventy percent of our employees come from the automotive program at Willowbrook High School in Villa Park,” Bob says. “Their football field’s right behind us. We can hear them announce the games on Friday nights.”

Bob also recommends independent owners establish a succession plan as soon as is feasible. Because many shops fail to do this, he says, he fears the future might not hold as many independent tire dealers.

“We have our succession plan in place: Our son Kyle will be taking over when we decide to retire,” Bob says. “The majority of independent tire shop owners are at an age where retirement is probably not that far off. Who will carry on?”

Bob says since Dupage Tire was established in Lombard, three national chains and a large GMC/Buick dealership have popped up within four blocks of their location.

But it could be worse, Bob says.

“[The type of service we provide] is not available at the dealerships, where you seem to just be a cardboard number hooked onto the rearview mirror; nor do you get that at the national chains where there is a different person behind the counter every time you come in,” he says. “We were here first and we will still be here when they are gone.”

Check out the rest of the October digital edition of Tire Review here.﻿