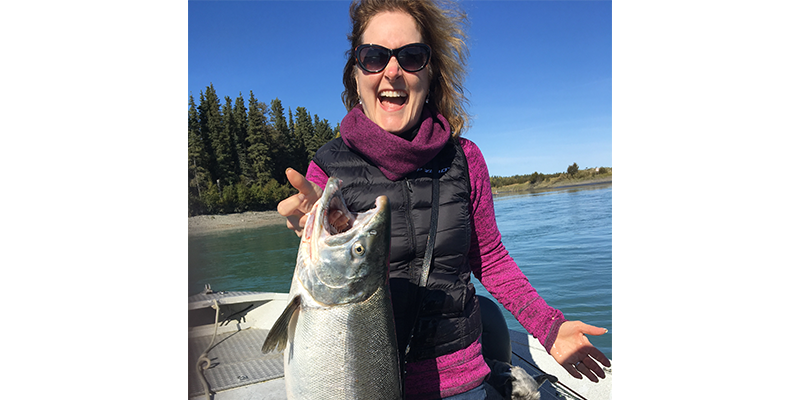 When faced with the insane loop of doing things the same way while hoping for better outcomes, replace that loop with your own visualization, then actions, to preprogram the changes you need for your success in 2019. 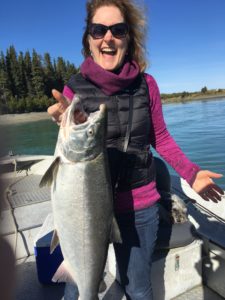 Salmon fishing in Alaska. (Many thanks to Jerry & Craig Wortham of Alyeska Tire for hosting us on the first leg of our honeymoon travels.)

Tire Review’s December issue is inspired by movies that have inspired us. As we look to 2019, the New Year gives the opportunity to see things a little differently and to reinvigorate our passion for success and change. Often we look to things like song lyrics and movie lines to adopt as personal mantras. Take a look at our “Business Lessons from the Big Screen” in our December issue for some inspiration. Enjoy!

When people talk about “getting lost” in a movie’s storyline, recent brain research from Georgia Institute of Technology has found evidence that actually supports that concept. Scientists discovered that as suspense builds on screen, the brain shifts into a neural mode similar to tunnel vision, where the rest of the world and its distractions melt away, and the sole focus of attention is on the screen and the story. The reality of a person’s surroundings becomes secondary to the message on screen.

Perhaps that’s why film has been so widely used as a tool of influence, and at its worst, as propaganda. The combination of sound, visual and story can often transform a person’s sense of reality, shifting their initial perspective, evoking a sense of empathy and understanding that otherwise might be lost through conversation and written word alone. Documentaries and nonfiction films that seem to be rooted in facts and reality have proven effective tools in influencing the viewer. From “Reefer Madness” and its anti-marijuana message in the 1930s to Leni Riefenstahl’s “Triumph of the Will, ” which horribly glorified Adolf Hitler and the Nazi Party, to the many food documentaries on Netflix and those by social activists like Michael Moore, film has been used as a catalyst for change throughout the ages.

For instance, movies like “What the Health” intend to persuade audiences to rethink their meat consumption. “Top Gun” led to increased recruitment within the military. More recently, roughly 25% of college students changed their opinion favorably about the government after watching “Zero Dark Thirty,” according to research published by the American Political Science Association.

For me, I often create my own personal propaganda – what I refer to as “mental marketing.” With all the messages bombarding us on a daily basis (over 3,000 by some estimates), mental marketing helps remind me of my goals and sell myself on positive change. Part of that approach is to make use of visualization in addition to situational mantras, like those great movie lines on the pages that follow.

More “In Perspective” from Patti Hoying

Exploring the Focus of Your Future Business Model

Raise the Bar to Shift into Top Shop Mode

Dealing with the Pain of Change

Religious texts and philosophers have often referred to the power of thoughts to create your reality.

“A man is but the product of his thoughts. What he thinks, he becomes.” – Mahatma Gandhi

“We are shaped by our thoughts; we become what we think. When the mind is pure, joy follows like a shadow that never leaves.” – Buddha

So if movie quotes and inspired thoughts can change your life and your business, how do you plan to harness that power in 2019?

Elite athletes for years have used visualization techniques, sometimes called “mental movies,” to improve performance. Gold medal Olympic swimmer Michael Phelps often talks about the importance of visualization. His coach, Bill Bowman, trained him as a teenager to visualize the perfect race in his mind each night before bed. At practice, he was told to “watch the videotape” to remind him of what a top performance feels like, which made him push a little harder. From diving in and swimming flawlessly, to touching the wall and removing his cap and goggles, each night Phelps watched that perfect race in his head, which helped him develop instinctual habits that focused on excellence. His swimming success started with the success he visualized. He retired in 2016 as the most successful and decorated Olympian of all time, with a total of 28 medals – 23 of them gold. His secret wasn’t to keep up with other top swimmers but to do whatever was necessary to be the best, “to do the things that other people aren’t willing to do,” as Phelps famously said.

What about you? What’s happening in the mental movie for your business? If you’re focusing on what’s going wrong (or could go wrong) instead of what’s going well, consider a shift in your mindset as a resolution this year. Take a moment and picture that perfect day in your head – from the time you open the doors to the end of the night when you turn out the lights. Consider what actions build to create it as if it’s routine.

Maybe it’s raising expectations within your team and giving more praise for a job well done. Or interacting with a customer to diffuse a concern, taking more time to turn the day around for someone who’s facing some challenges. Perhaps delivering the highest level of care your shop can give, with no debate over price since that incredible level of service and value is beyond question, that is, in your own mind movie.

Think about that perfect day for you. Play it in your head. Then repeat it until it becomes a habit. And when faced with the insane loop of doing things the same way while hoping for better outcomes, replace that loop with your own visualization, then actions, to preprogram the changes you need for your success in 2019.

In Perspective: Guiding Your Thoughts to Design Your Success