You notice it right away. After the name of the founder, thebusiness has "Wheel Align­ment" next, with the word "Tire" appearingonly at the very end.

It’s the reverse of the usual "tire and auto service" sequence, and it has been that way since Roger Goff started Roger’sWheel Alignment & Tire in Caldwell, Idaho, in 1978. Goff opened hisshop as a front-end specialist, doing alignments and brakes. 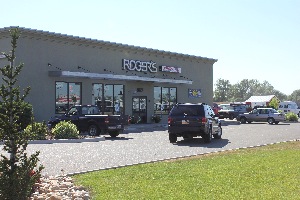 “His customers actually forced him into the tire business,” his son,Brad, recalls with a laugh. “It wasn’t something he was activelyseeking. In the course of repairs he’d tell customers, ‘Your tires areshot,’ and they’d say, ‘Then you get us new tires.’”

Over the next 33 years, the small service shop grew into astate-of-the-art facility that offers tires, custom wheels, alignments,brakes, chassis lifts/lowering and a full range of automotive services,plus car stereo and other vehicle electronics installations.

Now Brad, age 39, and his brother Ryan, 32, run the operation for theirparents, Roger and Donna. At some point they will acquire the business,says Brad, but their names are not yet on the title.

Brad has been in the business non-stop since he was a teenager, workingafter school and through summers. “I really enjoyed the people, and thecars, and didn’t mind the work. I had some different opportunities, butlooking forward, I was hoping it would be a future for me, so I stuckwith it.”

Ryan went off to college, but decided to come back to the business,says his brother. While both of them can do most everything in theshop, they work at managing the business, which is comprised of onestore with eight service bays and 16 employees.

The store had $2.4 million in sales in 2010, with 55% of that businesscoming from tire sales, almost all of it retail, and 45% from autoservice.

“Most business comes from a 15-mile radius, but some customers drive tous from as far as 140 miles away,” says Brad. He describes the area asrural market with a strong farming community, and agricultural businessstill accounts for about 10% of the company’s tire sales. 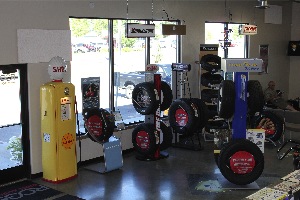 But over past decade, farms gave way to housing developments as thetown’s population nearly doubled to 40,000 when technology and softwarecompanies moved into the region, some 20 miles west of Boise. Themarket is more diversi­fied as well, with a growing His­paniccommunity.

“They’re great customers for us,” says Brad, who always makes sure theyhave fluent Spanish speakers on staff. The company has diversity, too,with three Hispanic employees on the workforce.

A New Location
Five years ago, the shop was moved from its original location – abusiness incubator that had no frontage – to a site less than a mileaway on a state highway, primarily to get better traffic exposure. Thenew store now has 22,000 vehicles pass by each day, which has meant abig boost to first-time customers.

Also, a conscious effort was made to make the store appearance clean,bright and modern so people, especially female customers, would bedrawn to it. It is not in the image of a traditional tire shop. Whilethe service areas are equipped with state-of-the-art balancers,alignment racks, diagnostic and TPMS tools, there is no “tire shopimage” at the front counter and no tire or grease odors in theshowroom. A prominent feature there is a wall-wrap mural they installedwhen the shop joined Tire Pros last autumn. It features the Rogers’logo embedded in it, along with details about Tire Pros’ nationalwarranty program to reassure customers that they are covered whereverthey go.

Brad likes the uniform franchise look of Tire Pros shops. “Ourcustomers, or those from any other affiliate, can come in andexperience the same atmosphere and get the same type of warranty. Thathas helped us grow our tire business, being able to provide thatwarranty along with the mechanical side of our business.”

Business on the Side
A separate room opposite the tire displays features custom car audio,satellite navigation systems and other electronics. This side business,run by an employee hired from a stereo store, was added when the storemoved to its new home. 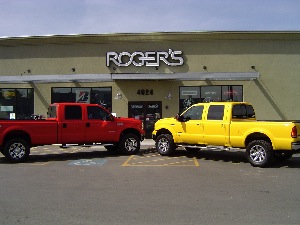 This revenue stream is more subject to economic ups and downs andshrinking markets due to previously aftermarket-only products like GPSnow becoming standard on some vehicles. But auto service and tiresremain steady and the company’s main focus, according to Brad.

Restructured
There was a downside to the new store, however. “When we opened, weweren’t prepared. It was over­whelming,” Brad re­members. Even withextra employees, they couldn’t keep up.

“We were busier than what we needed to be,” he admits. “We bought theproperty at the peak of the real estate market and opened just in timefor the economic downturn,” Brad notes.

The slow-down gave the brothers an opportunity to take a hard look atthe way they were doing business. “We put structure into it like wenever had before,” Brad explains. “We put different policies in place,different pricing structures and redefined positions people had.”

They added full-time service writers, one of whom is a mastertechnician with years of experience writing repair orders at autodealerships. All sales staff certified in tire technologies by takingvendors’ training.

“We’ve tried to train all our people to be more professional and nothave customers relying on any one person; they can receive the samegreat service from any employee,” says Brad.

“We decided we wanted a different type of customer, not the big-box store customer who is always shopping price.
“We slowed down the way we work on cars. We spend more time with ourcustomers building relationships rather than getting them in and outquickly,” he adds. “We’ve expanded our mechanical service greatly. Allof our technicians are ASE-certified. Where before we just did brakes,ball joints and alignments, now we’re a one-stop shop, offering servicefrom oil changes to engine replacements.”

Even though the brothers have focused on greater efficiency, theyhaven’t forgotten their roots. “It’s a family business, and we take itpersonally,” Brad states.

“We know most customers by name when they walk in the door, and wegreet them. We still have major-name brands of tires. We’ve simply madeourselves a more well-rounded business where customers can easilycompare our offerings, from oil changes to car stereo.”

Idaho Dealer Goes One Way, Then Another and Then Some