Once marketing parameters are laid out, tire designers take a mixed approach to final product. 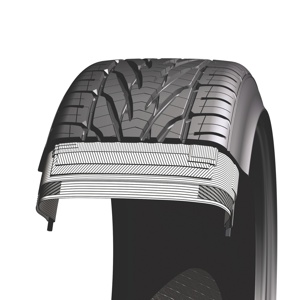 There is more to designing tires then just shaping and cooking rubber. Tire designs contain many raw materials integrated into a complex structure of steel belts, textile plies and tread patterns. Lots of time, technology and consideration go into a tire before it rolls out onto the road.

When developing a new replacement tire, the designer will start with a product definition that includes targets for treadwear, snow traction, wet and dry handling, ride comfort, rolling resistance and noise.
Due to cost and time restraints, seldom will a tire be “all new.”

Typically the designer will start by looking for an existing tire that is similar to the new replacement tire’s product definition. Competitors’ tires of similar specification are often also analyzed and benchmarked.
Although the tread usually attracts the most attention, the designer has other things to consider. A mold profile must be chosen. Generally the designer will stick with an existing profile, but several combinations of tread patterns and profiles will often be considered.

Several cost factors must be considered, including material costs and factory capabilities. The complexity of a tire’s construction and the tolerances that must be maintained all add to the total factory time and impact the cost of the finished tire.

Tread pattern concepts are explored and narrowed down early in the design process. Is the tire going to use an asymmetrical (generally beneficial) or directional (effective, but can cause noise problems) tread? What does the marketing department want to tread pattern to look like?

After the look of the tread pattern is narrowed down, computer models can usually do a sufficient projection of the pattern. The computer-generated pattern is normally confirmed by either hand cutting slick tires, creating test molds and producing demonstration tires, or even using modern 3-D printers to produce segments of a ‘tire’ with the pattern.

Grooves and Sipes
The tread pattern primarily affects traction on wet, snow-covered or loose surfaces. Edges enhance traction where there is only slight penetration of the surface such as in hard packed snow.

On soft surfaces such as mud or deep snow, paddle-shaped tread elements are more important; along with keeping the voids clear. The percentage of void area in the tread pattern is important to wet traction.

Grooves channel away water while shoulders are designed to provide protection and aid traction during hard cornering.

An important feature of modern tread patterns are sipes or ‘kerfs.’ Molded into a tread during the curing process, sipes are generally 1/10th-inch or less wide. Sipes may be circumferential, lateral or diagonal and help fine tune a tire’s handling, traction, ride and wear chara-­ cteristics.

Snow traction is a major attribute of kerfs and winter tires customarily have the most sipes. Tires need biting edges in the winter, and kerfs provide more places to collect the snow. The extra grip comes at the expense of stiffness and results in less precise dry handling and faster wear.

After snow traction, the greatest contribution of sipes is providing better wet traction. Adding sipes helps channel more water off the tread face, so there is less hydroplaning than a tire with only slots and grooves.

Sipes can also help with the noise level of a tire. When a tire rotates, air is pumped in and out of the leading and trailing edge of each tread block. Sipes increase the flexibility of the tread blocks and the widths, depths and locations of the sipes are varied to spread the resulting tones across a wider sound spectrum. Some of the sounds cancel each other out and the overall level of noise is reduced.

Sipes can also be used to promote even wear and assist in heat dispersion. Tread blocks without kerfs tend to wear first at the front and back edges. By adding sipes, the tread blocks are made more flexible and wear occurs more evenly across the blocks.

Sipes were originally simple cuts, but zigzag patterns soon followed to aid ice and snow traction. Waffle iron like patterns added a small, interlocking texture that created more edges for traction while retaining more tread stiffness for cornering. The latest technology is a 3-D sipe, where the cuts change direction inside the tread, which delivers better traction and helps stiffen tread blocks.

All About Compounding
The tread compound of any tire is a compromise among dry handling, resistance to hydroplaning, noise, snow traction, ride comfort and treadwear. In general, UHP and competition tires use compounds optimized for very high temperatures and sacrifice everything else for dry handling. High performance tires make similar compromises, but don’t go to the extremes of UHP tires. At the other extreme, winter tires have compounds formulated for cold temperatures.

All-season tire compounds are designed for traction in everyday driving conditions across broad temp­- erature ranges. Touring tires are normally the best balanced of all passenger tires. Standard all-season tires typically have reduced levels of all of the performance parameters, with dry handling suffering the most. 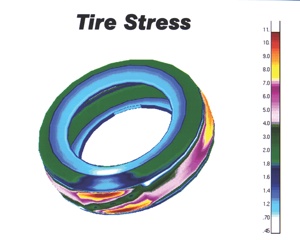 Regardless of the category, all-season compounds are expected to deliver good tread wear and low rolling resistance. Balancing these competing goals is one of the most challenging tasks faced by tire designers.

Without reinforcing materials and the vulcanization process, a tire would be like an eraser that would crumble and fall apart. In the early 1900s, it was found that the use of carbon black as a reinforcing filler increased the durability and strength of rubber (and made tires black instead of white). Adding carbon black also helps conduct heat away from the tread and belt areas and reduces thermal damage to the tire.

Around 1990, tiremakers began to use silica as a reinforcing ingredient. The added benefit of silica was grip improvement. Although tires can be made using only carbon black or just silica fillers, most tires use a highly secretive combination of both.

An increasingly important consideration in tire design is rolling resistance. Rolling resistance is generated largely in the tire’s tread, which deforms as it comes into contact with the pavement, then springs back. The flexing generates heat, wasting energy without providing any benefit. The challenge is to let the tire flex enough for good contact with the road while minimizing internal friction and wear.

Low rolling resistance tires can improve fuel economy by as much as a mile or two per gallon more than conventional all-season designs, and even more compared with high performance tires.

Compromises and Solutions
The negative side of low rolling resistance tires is a reputation for reduced wet traction and shortened tread life. Tire companies say that advances have reduced the rolling resistance of tires by 25% or more while largely overcoming the typical drawbacks.

The traction provided by any tread compound has two components.

The first is friction from the tread pressing on the road surface. The amount of traction from friction has a relatively flat curve that usually peaks at slip angles of about 50%. (Slip angle is the difference between the direction the tires are pointed and the actual path that the vehicle is traveling.)

The second component is from the tread pushing against vertical surfaces as tire deforms into the micro-texture of the road surface. Traction from deformation peaks at low slip angles (around 5%) and has a steep curve. The peak combination of traction from friction and deformation occurs at slip angles around 10%.

The tread must not only deform into the micro-texture, it needs to hold that deformation and not spring back to its original shape. Unfortunately, rubber’s natural property is to spring back.

To get the tread to hold its shape, the principal additive is styrene, a plastic with clay-like properties.

Styrene is very ‘dead,’ with almost no tendency to spring back into its original shape when deformed; just the opposite of rubber.

But styrene has drawbacks: it doesn’t work well when it’s cold and its deadness retains heat as the tire flexes. Retained heat is terrible for rolling resistance and accelerates treadwear.

Various other ‘modifiers,’ typically resins and waxes, are added to tread compounds to try to counter styrene’s negative tendencies and make tires work over a greater range of temperatures and loads.

Modifiers work by keeping the tread in a less definite form with less of a particular shape. When the tread has a more distinct structure, traction is reduced.

At this point the designer has a working new tire and it’s time to assess its actual performance against both the product definition and the competitors’ benchmark tires.

Computer simulations and the designer’s experience with similar products will probably get the new tire close, but the test track will ultimately determine whether the design is on target or not.

The Science Behind Run-Flat Tires

How 'New' Tires Are Designed