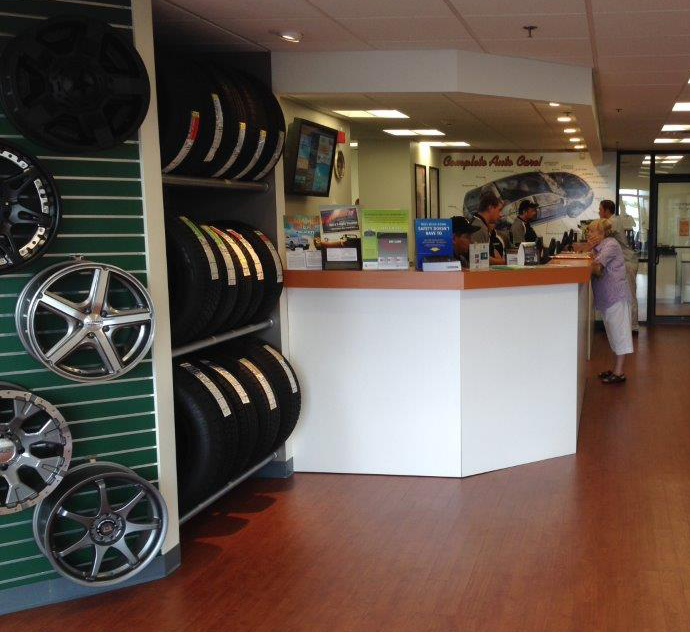 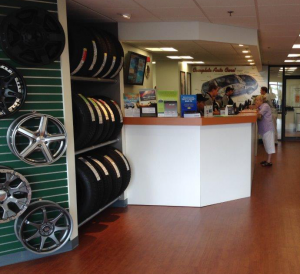 The three generations of owners of Hogan Tire & Auto Service have seen a century’s worth of change.

The family-owned tire dealer in the greater Boston area has survived and grown despite wars, the Great Depression and vast technological advances; events that changed the business landscape across the country.

It all started in 1915 by Thomas Hogan, a Boston-area chauffeur.

“In those days the chauffers maintained the cars,” explains Ed Hogan, who runs the business today with his brothers, Bill and Tom. “He started out by selling supplies to other chauffers and it got to a point where he was doing so much of that so he stopped chauffeuring and made that his full-time business.”

Thomas Hogan opened his first retail store on Huntington Avenue in the heart of Boston. He survived the Great Depression by selling some of his shares in U.S. Rubber (which later became Uniroyal), and purchased the stock back after World War II.

“Then he started selling Chryslers to all the GIs coming back from the war,” Ed adds.

At that time, Thomas’s son Ed-ward joined the family business after serving in the Army Air Force during World War II.

The business also became one of the first Michelin dealers in the country.

In 1960, Hogan was forced to move from his original location because the city had plans for what became the iconic Prudential Tower.

“That’s when we moved to Woburn and we got into the truck tire business because they were building the national interstate,” Ed explains. “That’s how it stayed for a while. We were doing recapping, trucking, and retail up until the early 1980s.”

Growing and Growing Up

The three brothers grew up in the family business and spent their summers and holiday breaks from school working alongside their father and grandfather.

“We all started out changing tires in the bays,” Bill says. “In the early 1980s, Tom and myself worked in the recap shop, recapping truck tires. After about two years of that, my dad asked us if we wanted to continue to do recap or if we wanted to do retail, and we both wanted retail. Recapping in those days was hard and hot and dirty.”

The brothers worked their way up to helping customers behind the counter and eventually became assistant managers at various store locations. “We learned it from the bottom up,” adds Bill.

Later in the 1980s, the third generation of Hogans took over for their father, who is now 96 years old, and they decided to sell off the truck tire division so they could focus more on retail.

“We’ve seen it all and I think that the key to us still being here is just being able to change with the times,” explains Ed.

Brother Bill adds that their father and grandfather were never afraid to try something new to stay ahead of the competition.

“When we look back on our history I think the important thing is to continue to reinvest,” he says. “As my grandfather used to say ‘it’s always nice to add something new to the cart.’”

Today’s business challenges come in the form of technology and national competition.

“We see so many different SKUs, and it’s become so technical with TPMS,” says Ed. “Back then, anyone could be in the business if they had a tire machine. Now it takes a lot of training, and repetitive training. We’re constantly having meetings with our guys on what the new technology is, what they need to look for, what the different issues are with different cars.”

The Hogans have about 75 employees, and the owners say having employees with an array of skills keeps business in balance.

“It’s a mix,” says Ed. “What we really look for is someone who is customer-service oriented, that knows how to take care of somebody and how to handle a customer’s issue. That’s harder to teach than the different sizes of a tire that go on a car.”

“And you look for someone who is technically savvy,” adds Bill. “Not everyone is good at the same thing.”

The Hogans are proud that many employees have been with the family for 15, 20 and even 30 years.

“I still think there’s a certain amount of trust when you say you are a family business and the same family has been running it for 100 years,” says Ed. “If you have a problem down the road, you’re going to be dealing with a member of the family. But with a chain store, who knows who’ll be running that branch next year.”

Between national chains, big box stores and car dealers, the Hogans say competing for business is as fierce as ever.

When it comes to advertising, the brothers say their marketing efforts on radio seem to be the most successful.

“We spend quite a bit of our budget on radio in the Boston area. I would say that’s that majority of our budget. We have a promotion that will run two or three weeks out of the month every month,” Ed explains.

They also do a little bit of social media but admit it’s been a little slow to catch on.

“Tires aren’t really a social event,” says Ed. “We’re doing our share but we’re not spending too much time on it.”

Another thing that has been successful is their mobile-friendly website and online tire catalog which allows customers to shop and price tires.

“There’s more people shopping online and it’s becoming more and more important because people want instant answers,” says Ed. “We have pricing online because we feel that if that’s what the customer wants, that’s what we give them.”

The brothers say they try to attract customers who are looking for the best overall value.

“We try to separate ourselves from the competition with our service and what we can provide,” says Ed. “When you get down to it, everyone can provide a tire. It’s the Michelin I sell versus the guy across the street.”

“We try to offer the best value when you combine price of the tire and the installation package and warranties and customer service,” adds Bill. “We wrap that in a package so we can offer the best overall customer experience that we can.”

The family will celebrate 100 years in business this year, a milestone for any business.

Surviving a Century of Change