From one to 33 in the past seven years. That’s how many tire stores Dan and Diane Hennelly have opened despite one of the worst economic recessions on record – and their enterprise is still growing. 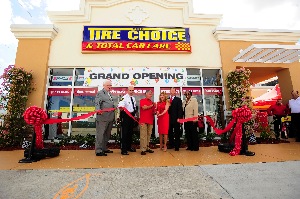 Doing business as The Tire Choice & Total Car Care, Hennelly Tire & Auto Inc. is headquartered in Ft. Lauderdale, Fla., and has stores clustered from Port St. Lucie down to North Miami on the east coast and from Tampa to Naples on the west coast. Plans are to open 10 stores in Orlando next year.

The dealership’s rapid growth actually didn’t spring from a single store in 2004; it has come from decades of preparation. Dan has been in the tire business 30 years, starting in high school sweeping floors at a Goodyear store in south Chicago. After 10 years with Goodyear, he was running more than 100 locations in 11 states. Then he went to work for industry icon Larry Morgan, who had purchased Olson Tire in Florida with the dream of growing 35 stores to 200. Eleven years later, Dan was president of Morgan Tire (Tires Plus) with 600 locations. “That was a tremendous education,” says Dan. “My time with Goodyear gave me a strong understanding of corporate knowledge and structure, but at Morgan, you wore 10 hats.” That’s where he learned site selection, real estate development, mergers and acquisitions, vendor relations, demographics and more.

“I worked with Larry and he let me make a lot of decisions,” Dan says. In addition to developing ad strategies, compensation programs and product screens, he also learned the larger picture of developing policies, procedures and infrastructure to build a company.

Diane also worked for Goodyear for seven years, in the international division as an export manager. That’s how the two met; they married just after Dan joined Morgan Tire. While at Goodyear, Diane obtained a business degree from the University of Miami and graduated with national honors. When Morgan decided to sell his company, Dan and Diane decided to open their first store.

New Look
Last November, the new flagship store opened near the corporate off­ices with great fanfare. When you’re as successful as Dan and Diane are, you can get the local mayor, the sheriff, the Better Business Bureau and auto racing legend Mario And­retti to attend your ribbon-cutting.

The new Mediterranean-style store is the model for those that will follow, and Dan proudly points out that Diane is responsible for the interior design.

“It’s in an area where competitors are car dealerships, so I wanted it to have that same rich, elegant look,” says Diane. She achieved it with porcelain tile floors, granite countertops, cherry wood paneling and marble. Only flat-panel monitors sit on the counter and all tires are displayed on power walls. “With the upper-income demographics we’re going after, we have to have a great image to gain trust and foot traffic,” Dan adds. Since 62% of their customers are female, Dan and Diane wanted the store to be inviting to women. They added floral arrangements and air fresheners. “The store smells good, not like tires,” Diane notes.

Secret to Success
At last count, the company had 325 full-time employees. In 2009, gross sales were $38 million, all of it from retail, with a sales mix of 40% tires and 60% vehicle service. After a slowdown in 2008-09 that resulted in opening only two or three stores per year, the company is once again on pace to open a new store every six to eight weeks. 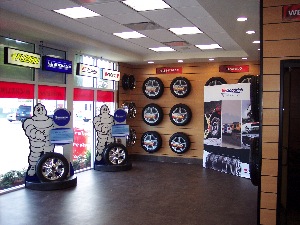 How do they sustain such growth? What is their secret? Dan is quick to answer: “We have great people in our company. I’m very, very blessed.” He continues, “The key to success at Morgan Tire was to find, develop, train, mentor, motivate and provide upward mobility to performers and people who can be positive leaders. I use the same formula.”

Continued growth attracts good employees who want the opportunity to grow with the company. Dan relates the story of an employee who started out as a tire buster, became a technician, then a service manager and a store manager in six years. “Managing people and raising children is a lot the same,” he says. “You’re very proud of the way people, with some guidance, grow into those positions.”

Dan reveals more. “Our business is good locations, plan your work, work your plan, stay focused, stay disciplined and work very hard.” He notes that Diane and he work seven days a week and have for seven years. “That’s a big part of our success.”

Distinct Duties
Tending to business, the husband and wife of 17 years spend a lot of time together. How well does that work? Dan is nominally the chairman and CEO; Diane is vice-chairperson and CFO, but Dan says with a laugh, “We both know who the boss is, and I have accepted that.” Dan quickly emphasizes he couldn’t have accomplished what he has without his wife and partner. “She has allowed me so many opportunities and supported me and helped me. Like anything with a relationship, if there is trust, respect and support, you’ll get through things.”

“We have been successful because of a great business model, great real estate and Diane has put good controls and processes in place,” according to Dan. Diane adds, “You have to be on top of things. We’re watching yesterday’s business today. We’re reconciling our bills daily, reconciling inventory daily.”

Recession Lessons
“The recession has taught us all to do more with less,” according to Dan. “We restructured store schedules and the staffing matrix during the recession to survive, but last year was the best year in the history of our company, even at the end of a recession, so we plan to keep these disciplines in place.” Diane adds, “We realized we should have been doing this since day one, like watching payroll and watching controllable expenses. We’re watching all of that more than we ever did before.”

Community Impact
As a family-owned company, The Tire Choice sponsors a lot of local Little League baseball teams near its stores throughout Florida. “The parents really appreciate this,” says Dan, and these parents often become valued customers, he notes. One of the venues at a Tampa-area multi-diamond ballpark is known as Tire Choice Field and carries a five-foot high banner on the backstop. Such recognition helps build the store’s brand equity in the community, too.

The dealership also is involved in local high school sports sponsorships and the Universities of Miami and Southern Florida (Tampa). Both Dan and Diane are active in supporting Sheridan House, which provides shelter, spiritual and educational guidance to boys and girls ages 12 to 15 and assistance and counseling to families, primarily in Broward County.

Looking Forward
Reflecting on how far they’ve come in just seven years, Diane says sometimes she can’t believe it. “Dan’s goal was 30 to 35 stores when we started, and I thought, ‘No way we’ll have 30 stores,’ but here we are and growing.” She adds, “We’re excited for the fut­ure. I think things are looking brighter and there’s a lot of opportunity.” She says of being an independent tire dealer, “It’s a good industry to be in. You can be successful, but it’s a lot of hard work and takes finding good people, but if you have those, it works.”

Where does Dan see The Tire Choice in five years? “Sixty-plus stores and a lot of great people leading and running our company.”