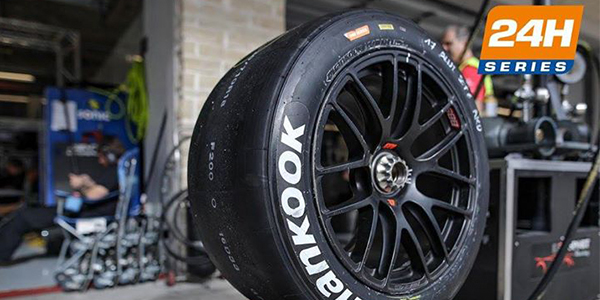 Hankook Tire returns as the official sponsor and sole tire supplier for the 24H of COTA race alongside organizing partner CREVENTIC.

Following an exciting inaugural year, Hankook Tire returns as the official sponsor and sole tire supplier for the 24H of COTA race alongside organizing partner CREVENTIC. As drivers from all over the United States, Europe, South America and Asia descend upon Austin, Texas, Hankook will supply all teams with their F200 tire, a top of the line racing slick specially developed to handle the extreme stress and durability requirements of circuit racing. Also available is the Z207 tire, developed with a compound and tread design to maximize performance in wet racing conditions. Hankook branding will also appear on the cars’ windscreens and bumpers, in addition to trackside signage.

Hankook Tire returns as the official sponsor and sole tire supplier for the 24H of COTA race.

The 24H Series Powered by Hankook recruits a mixed field of endurance cars across half a dozen classes from GT cars, Touring Cars and multiple specialized classes in between. Same as the cars, the endurance race is broken up into two segments – one 10-hours long and the other 14-hour long – and pits amateur, semi-pro and professional drivers against one another. Each team is allowed two to five seats of drivers to participate in the race. This brings a level of strategy to the race as teams will have to decide which driver will start, maintain and finish the races as the event continues around the clock.

The Circuit of The Americas track is considered one of the most challenging and difficult race tracks, not only in the United States but the world. Blending sweeping, fast sections with technical corners, the 3.5-mile track is comprised of 20 turns designed to challenge even the most seasoned drivers. Set on 1,500 acres in the rolling hills just outside downtown Austin, Circuit of The Americas also hosts a variety of other entertainment motorsports events that included F3 and F4, which Hankook is a primary sponsor of as well.

“We are very pleased to be back in Austin at COTA for the second year of the 24H series,” said Sooman Choi, Vice President of Marketing and Sales, Hankook Tire America Corp. “Endurance racing is a great way to test the mechanical durability of a car from tire to driver, and this will prove to be an exciting weekend of motorsport.”

The event is free to attend for spectators and an open paddock allows many a chance for an up-close view of the special event. Qualifiers are expected to start Friday, Nov. 16.

People: Cooper Tire Adds New Member to Board of Directors

Tarsus Group Provides Update on Tyrexpo Asia 2021
Connect with us