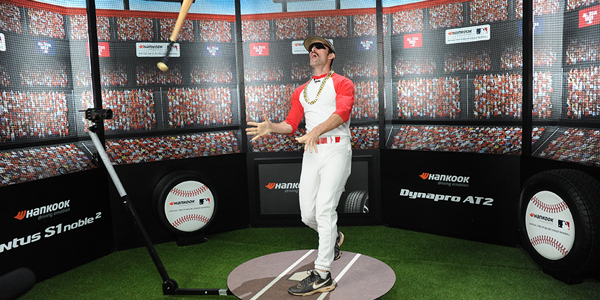 Leading up to the MLB All-Star Game in Cleveland, Ohio, Hankook Tire hosted fans at its booth at Play Ball Park.

Leading up to the All-Star Game on July 9 at Progressive Field in Cleveland, Ohio, Hankook Tire hosted fans at its booth at Play Ball Park.

Fans were given a chance to mimic their on-field heroes by pretending to celebrate a game-winning home run and showing off their best bat flip celebration at Hankook’s “Bat Flip” simulator booth. Using a 360-degree panoramic video arm assembly, fans were asked to step up to the plate and demonstrate their own creative bat flip enactments while the camera apparatus circled.

For the main event, Hankook also hosted an honored military veteran at the MLB All-Star Game as part of its relationship with Disabled American Veterans.