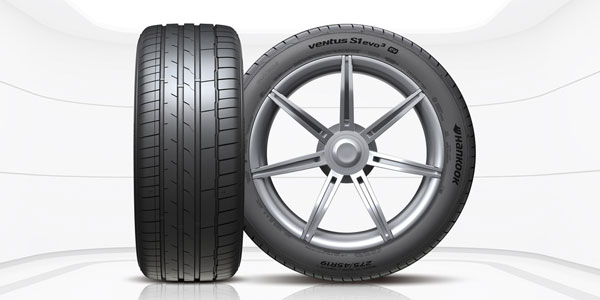 Hankook says the tire has a reinforced bead as well as high lateral stiffness for precise handling even at high speeds.

Hankook Tire is contributing to the Porsche Taycan with its Ventus S1 evo 3 ev in the size 225/55R19 XL 103Y on the front axle, 275/45R19 XL 108Y on the rear axle and “NF0” on the sidewall, which has been specially developed for the needs of electric vehicles.

The tread pattern of the Ventus S1 evo 3 was adapted in the ev version for Porsche in such a way that it reduces tire noises which may be perceived as annoying, Hankook says, adding the tire has a reinforced bead with so-called bead-packing technology, as well as high lateral stiffness for precise handling even at high speeds.

Hankook says its developers have also discovered an optimally balanced vulcanization process for the tire compound that ensures the right balance of temperature, time expenditure and pressure. As a result, Hankook says, the Ventus S1 evo 3 ev achieves 30% greater durability compared to a standard tread compound. Abrasion resistance has been improved by 5% compared to the conventional model and rolling resistance has been improved by 13% overall.