Hankook launched its debut tire in the U.S. all-weather segment, the Kinergy 4S2, in an event Sept. 1

The all-weather tire segment is growing each year, and Hankook Tire Americas has taken notice, making its debut this month in the all-weather category with the Kinergy 4S2.

“One of the things that’s very important to us is to have products that meet the needs of our dealers and the needs of consumers,” Curtis Brison, Hankook’s vice president of PLT sales, who joined the organization in June, told Tire Review. “From a dealer perspective, this is a very attractive tire because you can sell it all year long, and it has great winter capabilities.”

Hankook launched the Kinergy 4S2, which comes with a three-peak mountain snowflake rating, Sept. 1. With the growing all-weather category taking up between 5-10% of the existing all-season market, Brison said Hankook wanted a slice of the pie and says the Kinergy 4S2 provides the best value to the consumer and the dealer.

“For dealers, winter stocks can be difficult since you’re receiving a bunch of tires and hoping for good winter weather so you can sell out, but sometimes that’s not always the case. This tire helps with that,” he says. “For consumers, there are some markets that are kind of in-between [needing a dedicated winter tire or an all-season tire], and this really satisfies that need. It’s for someone who’s going to maybe meet some winter conditions throughout the year but doesn’t want to change their tire [to a winter tire].”

Brison said to create the tire, the company used its offerings in the all-weather segment from different parts of the globe to design the tire’s tread pattern, including the first iteration of the Kinergy 4S2 that was launched in Europe in May 2018.

But since the U.S. market requires higher mileage than other parts of the world, Hankook engineers altered the tread compound to meet those needs. Brison said the company spent about a year and a half executing performance and durability tests. Wet and dry performance tests took place at Hankook’s America Technical Center in Akron, Ohio; snow performance tests at Technotrac in Ivalo, Finland; and durability and wear tests at TTF (Texas Test Fleet).

For both dealers and consumers, Brison said the Kinergy 4S2 gives them the best of both worlds. The tire, available to order now, comes with a 60,000-mile treadwear warranty.

“The Kinergy 4S2 was specifically engineered for optimal performance in all four seasons,” said Kijong Kil, vice president of RE development. “While it maintains strong dry performance and long mileage for the warmer months, its cutting-edge tread design also provides outstanding performance in winter conditions.”

Brison said the Kinergy 4S2, which will be manufactured at the company’s plants in South Korea, will soon be offered worldwide. The tire will be available in the U.S. in 45 sizes in 15- to -20-in. rim diameters, beginning Sept 1. Brison said the company will also run a promotion for the Kinergy 4S2 later in the year to help support dealer sell-out.

“We’re really excited to be helping dealers bring additional value to their end consumer,” Brison says, adding that one of the company’s main goals in its partnership with dealers is providing high-quality tires at a competitive value.

Flotation vs. Traction in Ag Tires
Connect with us 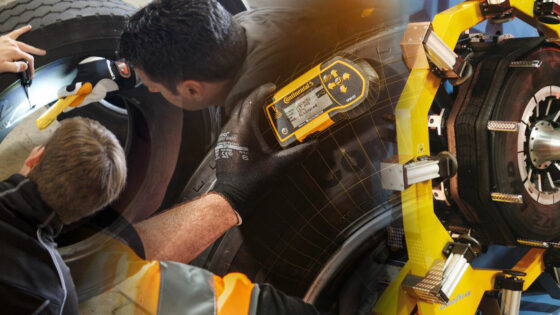