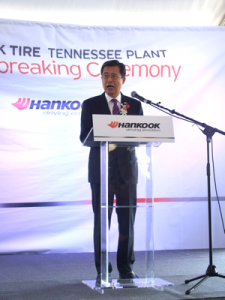 The 469-acre greenfield plant – set to be fully completed in 2018 – is located in the Southern automotive corridor, an area of the U.S. where automobile companies such as Volkswagen Group of America, Nissan and General Motors all recently chose to locate its manufacturing facilities. Mayor Bill Haslam, in attendance, expressed his excitement saying that the volunteer state and Clarksville is excited to have Hankook.

“Tennessee is known as the state that makes things. From guitars to whiskey, ice cream to M&Ms, and now tires,” remarked Haslam.

Tires are expected to roll out of the facility in January 2016. Phase 1 will allow Hankook to produce 5.5 million units/year of passenger car, UHP and LT tires. Phase 2, set to begin in January of 2017, will essentially double Hankook’s production capabilities, bringing the plant’s production to 11 million units/year by 2018. Suh announced that the company will commit over $800 million over the course of construction to the project, and it will result in about 1,800 new jobs for Tennessee.

Suh asked the state, county and city government to help assist Hankook in accomplishing its 2018 goal.

“It is better to lift together even if it is a blank sheet of paper,” said McMillan. “Hankook, today the community is ready to lift with you.”

Suh added that there will be proving grounds on the site and added that although Hankook has no firm plans for the site after phase two, there is room on the site to expand. He, however, did not confirm rumors of the tiremaker’s North American HQ move.

When asked how the Clarksville plant will help Hankook in its goal to become the fifth largest tiremaker globally, Suh told Tire Review that improved serviceability is its primary reason for building in North America. 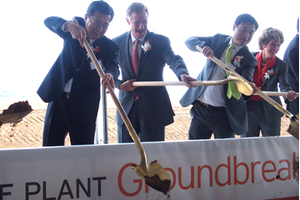 “There will be no delays for American consumers that want high quality Hankook tires,” said Suh, adding that the Tennessee site is located centrally for both the U.S. OE and replacement tire market.

At the ceremony, Hankook also honored members of DAV (Disabled American Veterans), specifically veterans from the Korean War. The Korean-tiremaker announced earlier this week that it will sponsor DAV with a $50,000 contribution.

“I was born close to the Korean Demilitarized Zone (DMZ), so I was reminded of it everyday,” said Suh. “I will always be thankful to the American heroes that stopped communists from spreading into South Korea.”