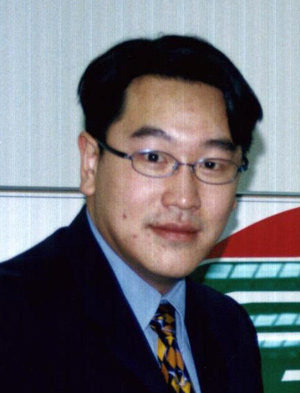 Federal Tire President Jamie Ma is only 29 years old, but he has been relentless in working to build up the company his grandfather started in Taiwan almost a half century ago. Ma, who joined Federal in 1998, majored in accounting and finance at the University of California at Berkeley.

Federal has expanded its distribution around the globe, most notably in North America, and has seen its sales increase nearly every month over the past two years.

Despite being in business for nearly 50 years, few people really know much about the company or its products. In this interview, Ma explains what Federal has done to increase its presence in North America, and what it is planning in the near future.

Over the past several years Federal Tire has put a heavy push on the North American market, but it is a relatively unknown company. Give us a brief history of the company and the products you produce?

"Federal Corp. was established in November 1955 by my late grandfather, Chi San Ma. Initially, it produced rubber belts and, as Taiwan’s economy continued to flourish, it started producing car tires in 1959. Seeing the need to produce quality tires, we established technical cooperation with two of the world’s largest tire manufacturers, Bridgestone and Sumitomo, each lasting 20 years and ending in 2000.

"After such cooperation, we now have our own unique tire technology that was built upon the strong foundation provided by these two technologies plus our very own innovation. In 2000, we produced our first ultra-high performance tire, SS-595, which today is still widely accepted globally and locally.

"Presently, we do not produce any non-tire products, but we have a subsidiary company, Federex Marketing Corp., that has the greatest distribution channel penetration in Taiwan and distributes Federal and a few other imported world-class brands."

What types of tires does Federal sell in North America?

"Our full tire lines – UHP, LT/SUV and passenger radials ®€“ are available in North America. Over the past few years, we have concentrated our R&D efforts to develop UHP and SUV tires. Since our first launch of UHP tires in 2000, our tires have received overwhelming response from all over the world, especially from North America. Our R&D people have come up with a new UHP tire that is scheduled to be launched next year.

"During the third quarter of this year, we will also be introducing a new SUV tire line named ‘Couragia.’ Our distributors are all eagerly waiting for this tire to be introduced to the market. The presence of Federal tires will keep increasing through the development of UHP and LT/SUV tires, which we see as the current and future market trends."

Who are your target customers, and what are your distribution goals in North America?

"We all know that North America is the largest replacement market in the world. Likewise, it is also a huge market for Federal products. Over the past five years, Federal’s marketshare has been growing steadily at a pretty satisfying rate in this region. We’ve also received numerous comments from end-users who were pleased with Federal tires.

"Starting 1999, all of our newly designed tires have been sent to the TVTC center in Pearsall, Texas, to test their performance against competing brands. Product wise, we have specially designed our UHP and SUV tires to meet the market demand in North America, and offer them at a reasonable pricing.

"We have divided the North America market into different regions. For each region, we look for a reliable long-term relationship with a distributor or independent dealer who is willing to market Federal tires and has good distribution. They have done a pretty good job.

"Five years ago, our marketshare was very small so we started to advertise in many tire trade magazines to increase product and brand awareness among distributors and dealers.

"We also took part in major exhibitions, such as the ITE/SEMA show, where we get to meet potential distributor customers, as well. Starting the third quarter of this year, we will be placing advertisements in consumer magazines to increase end-user awareness of the Federal brand.

"We believe the market penetration of the Federal brand can be enhanced, and we want to make our products available all over North America. It is my desire that whenever a consumer looks for Federal tires, they can get them right away anywhere they are."

Near-term, what are Federal’s specific dollar sales and unit sales goals in North America for the next five years?

"We are now concentrating on expanding the capacities of our plants in both Taiwan and China, and in five years time our projected sales for North America is three million units annually."

What type of independent tire dealer is a target for Federal Tire?

"As mentioned earlier, we look for reliable long-term relationships with distributors or independent tire dealers who are willing to market Federal tires and have good distribution within their region. For smaller independent dealers who can’t accept container loads, we usually refer them to a regional distributor who can cater to their needs."

Tell us a little about Federal Tire’s research and development and technology capabilities.

"We understand the importance of R&D and have always invested heavily in R&D, and will continue to do so. We have also spent a substantial amount on new equipment and design software. Our R&D investment has multiplied over the past few years since I joined Federal, and I am sure that we will put more effort into this area. I firmly believe that R&D is the core competence of a tire manufacturer. All of our R&D is based in Taiwan."

"Federal has invested millions of dollars in acquiring new equipment to test our tires in order to meet the anticipated new tire testing standards that will be set by the TREAD Act. In fact, our own lab tire test standards are higher than the standards that will likely be set so it will not be problem for us to meet those challenges.

"Since the TREAD Act has been imposed, Federal has formed a team to execute necessary tasks related to meeting TREAD Act standards. We are prepared to meet all current and future laws."

How many dealers does Federal currently do business with in North America? And what is your goal for the number of retail locations here?

"Currently we have five to six major customers in North America. Since we do not have any warehouses in North America, we have to look for distributors that service large dealers or wholesalers."

What tire companies do you view as Federal’s primary market competition in North America? Do you see opportunities for further technical cooperation?

"Every tire manufacturer is doing a good job in the industry. We certainly want to keep up our pace. We consider all the other manufacturers respectable competitors in the market, but sometimes I also see cooperative opportunities. So, to be honest, there may be a fine line between competition and cooperation for us. But, as a tire manufacturer, I can see Federal easily crossing the line from competition to cooperation when the right opportunity presents itself."

What is the chief advantage Federal offers to a dealer?

"One of the greatest things that we offer is territory protection. Federal distributors and dealers can safely promote and sell our tires without having to worry too much about unnecessary competition.

"The other thing is that we offer many attractive promotional items in neon color designs that reflect the technology, passion, enthusiasm and the continuous innovation of Federal."

What other global markets does Federal Tire compete in, and how well is your company doing in those markets?

"I travel all over the world frequently. But nothing excites me more than seeing cars fitted with Federal brand tires in the country I travel to. In the past, I had to look really hard before I finally found one fitted with our tires. But over the last few years, I saw more and more of these. This tells me that Federal is growing in the tire industry. I am thrilled by this growth and my dream is to see cars running with Federal brand tires on every street of the world."