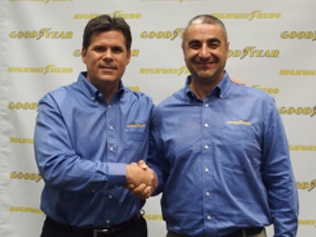 Goodyear Tire & Rubber Co. named Ivan Vasovic of Rancho Cucamonga, Calif., as its 31st North America Highway Hero at the Mid-America Trucking Show last week in Louisville, Ky.
Vasovic rescued another trucker who had fallen from a burning tanker truck that was hanging over the side of a freeway overpass last October in Los Angeles. The burning tanker truck’s driver was trapped inside when the diesel ignited. The driver kicked out a window, slid down the truck and fell to the ground, breaking an arm and a leg. At that point, the suspended truck was covered in flames.
Vasovic and another bystander tried to pull the injured driver to safety. Due to the intense heat, they could only drag the injured driver a few yards at a time. After dragging the injured driver another 20 yards from his original position, the burning truck crashed to the ground.
“Ivan’s quick thinking and brave actions saved a fellow truck driver from a life-threatening situation,” said Gary Medalis, marketing director of Goodyear Commercial Tire Systems. “He literally put himself in harm’s way to save another person’s life. Ivan’s decision to interject himself into this deadly scenario is a powerful example of the selflessness exhibited by professional truck drivers. He has earned the right to be called a Highway Hero.”
As the 31st Goodyear Highway Hero Award winner, Vasovic received a special Highway Hero ring and a $5,000 prize.
“I am very thankful to everyone,” said Vasovic. “I appreciate someone recognized this and I didn’t expect this at all.”
Other finalists for the award include: Brian Dunn, a driver from Knoxville, Tenn; Tim Horton, a driver from Sheridan, Ark.; and Scott Rosenberg, a driver from Isanti, Minn.
Advertisement
Click Here to Read More
Advertisement
Advertisement
In this article: