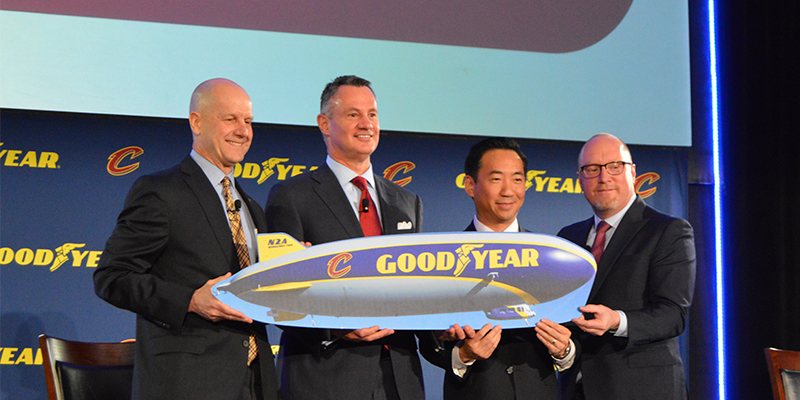 “Neighbors since birth. Teammates at last,” was the sentiment that surrounded the Goodyear Tire & Rubber Co. and Cleveland Cavaliers partnership announcement on May 15 at the Quicken Loans Arena. 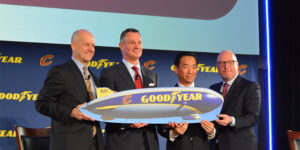 “Neighbors since birth. Teammates at last,” was the sentiment that surrounded the Goodyear Tire & Rubber Co. and Cleveland Cavaliers partnership announcement on May 15 at the Quicken Loans Arena.

Starting during the 2017-2018 season, the 2016 NBA Champions will wear jerseys featuring Goodyear’s Wingfoot logo. This is the first season the NBA will allow teams to have sponsors on their jerseys.

“This is a natural fit between two organizations rooted in Northeast Ohio whose strong brands have a global following,” said Rich Kramer, chairman, CEO, and president of Goodyear. “Goodyear has always been connected to the Cavs from our blimp coverage to the tremendous passion of our associates for the team, and we’re excited to make this relationship even stronger.”

“Goodyear is No. 1 in marketshare, No.1 in brand awareness, and what you’re seeing with an arrangement like this is our commitment to grow our brand,” Kramer told Tire Review following the press conference. “We want to make tire buyers more aware and what better way to do that with an organization like the world champion Cleveland Cavilers.”

When the NBA announced the possibility of jersey sponsorships in April 2016, a pairing between Goodyear and the Cavs was often cited as example for how these deals may work, Len Komoroski, CEO of the Cavaliers shared.

“It was just meant to be that a global iconic brand like Goodyear is our neighbor headquartered in Akron, Ohio, and shares the same DNA of basketball, community purpose and drive for success as the Cavs,” Komoroski said. “The treads and threads of this partnership are real, and we couldn’t be more proud to wear the Goodyear Wingfoot and come together to champion Northeast Ohio.” 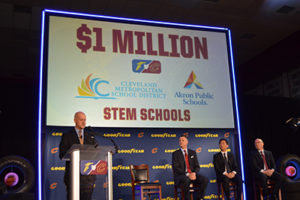 “I would say for us the NBA is really one of the globally growing sports. It has an impact not only here with consumers buying tires, but also internationally. In particularly in a market like China where its one of the fastest growing sports,” Kramer said. “This was for us was a great opportunity to leverage the Goodyear brand with an audience that’s growing and with a first class organization.”

Goodyear also has roots in basketball dating back to the 1930s, when Goodyear was a founding member of the NBA’s precursor, the National Basketball League. The Goodyear Wingfoots won the first NBL title in 1937 and the AAU National Championship in 1964.

“From our perspective it was a natural starting point. We had an 80-year association with basketball so finding a intersection with the Cavaliers went back to our history,” Kramer said.

Currently, Goodyear has no formal plans to partner with any Cavs players, but Kramer said those things happen more “opportunistically.” He pointed to Goodyear supporting the LeBron James Foundation and having Savannah James christen the Goodyear blimp.

The announcement of Goodyear’s partnership with the Cavs will impact other tiremakers deals with the team.

Kenda USA has a sponsorship deal with the Cavs dating back to 2013, but the deal will be phased out, according to the Cavs.

The financial terms of the Goodyear sponsorship were not announced.