As China’s economy is slowing down, local companies are looking outside the country to grow business. Among these companies is  Weihai, Shandong-based Triangle Group.

In November, the company formed a U.S. team in Nashville to foray into the already crowded local tire market. The operation, called Triangle Tire USA, will be in charge of Triangle’s growth in the U.S. by establishing a nationwide sales network and providing services.

“Developed countries like the U.S. are called a country on the wheels. They offer us great opportunities for further growth,” Triangle chairman Ding Yuhua said at a recent event in Shanghai to celebrate the company’s 40th anniversary.

Founded in 1976, Triangle sells tires in more than 180 countries. 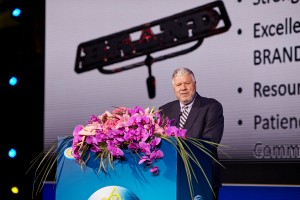 In north Europe, Canada and Russia, where winter brings extremely low temperatures, Triangle sells tires with compounds and patterns for ice and snow.

For countries in Southeast Asia and the Middle East, where the weather is hot and trucks often are overloaded for long distance transportation, Triangle sells TBR tires with low heat generation and high aging resistance.

Moving forward, Triangle will continue to focus on developing new tire models to meet different emerging markets, while increasing the supply of high performance tires for developed for those markets, Ding said.

Triangle operates two research centers located in Weihai and Akron, Ohio. A third tech center in Germany is under construction.

Triangle’s research strength also will be used to support the development of China’s manufacturing industry in the next five years, which aims to be “value added, smart and eco-friendly,” according to China’s recently published 13th five-year plan (2016 to 2020).

Triangle is working on a radio aircraft tire, which is scheduled to launch by the end of this year. The company also is working with China’s tech giant Huawei to build a chip-embedded “smart tire” for better quality control, as well as reliable interaction with drivers.

Despite the achievements so far, Triangle is facing great challenges in the U.S.

According to research in February 2015 by the Los Angles-based research firm Statistic Brain, not one Chinese tiremaker is in the top 10 brands of the U.S. passenger tire market. The top 10 brands dominate the U.S. market with a 76% share in total, leaving limited room for Chinese brands, which are usually sold in the U.S. at very low prices.

Therefore, he added, the strategy to be successful is “to be heard” by tire dealers, OEMs and end consumers.He dismissed the idea of competing in the low-end market.

“Selling at a low price will not make us successful in the long run. Instead, we will rely on our strong fundamentals: excellence in branding, resources, patience and commitment,” Cicero shared.