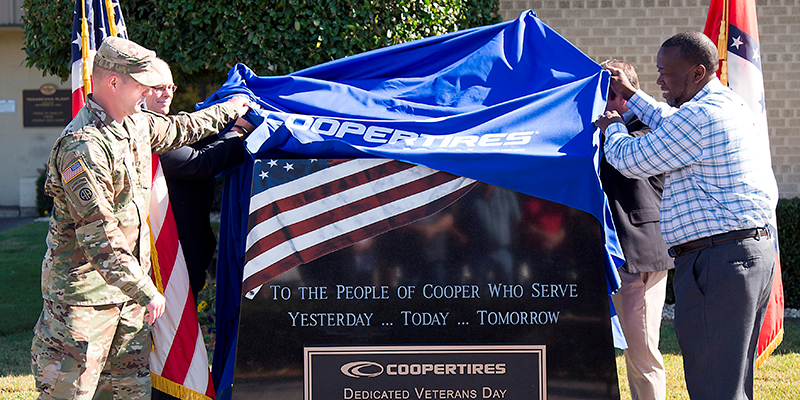 Throughout history, tire manufacturers have supported the U.S. military in a variety of ways. 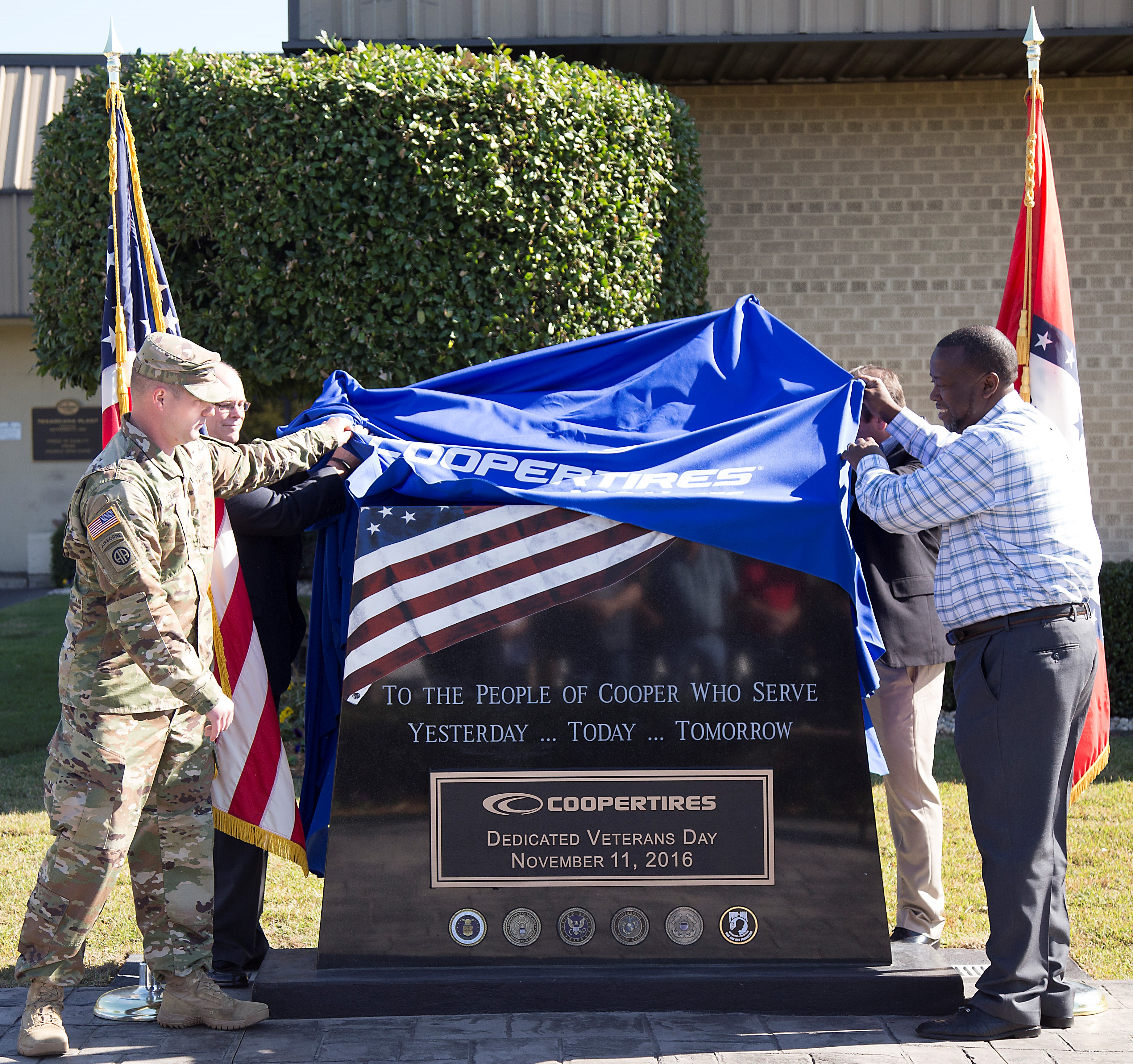 Throughout history, tire manufacturers have supported the U.S. military in a variety of ways. During WWI and WWII Goodyear made blimps for the U.S. Navy, and in WWII Cooper produced tank decoys, pontoons and landing boats. Today, many manufacturers have initiatives to hire veterans and give back to organizations that support wounded soldiers.

In this article we recognize some of the programs that tire manufacturers offer. Additional manufacturers told Tire Review they have plans to create veteran-specific hiring programs for their plants once they go online.

The tiremaker is actively involved with Veterans Jobs Mission, a national coalition of companies committed to hiring U.S. military veterans and spouses.

Additionally, the company works with the Charlie & Hazel Daniels Veterans and Military Family Center on the campus of Middle Tennessee State University. Bridgestone works closely with center to share employment opportunities, to provide interview preparation, and resume and social media guidance. The tiremaker is also committed to hiring their qualified veteran graduates, the company shares.

“Bridgestone is committed to hiring talented and skilled former service men and women to create a diverse and engaged workforce. We value veterans’ commitment, service and the leadership skills they bring to the private sector workforce, and believe that these skills are aligned with what it takes to be successful as a Bridgestone teammate,” says Paul Oakley, vice president of communications for Bridgestone Americas.

In addition to the Veterans Jobs Mission and Charlie & Hazel Daniels Veterans and Military Family Center at MTSU, Bridgestone has also contributed to the USO Nashville and USO Fort Campbell.

For the past four years, Bridgestone has also conducted a military teammate sweepstakes in which the winners get an all-expense paid trip to attend the World Golf Championships, the Bridgestone Invitational in Akron, Ohio.

Bridgestone also hosts annual military appreciation events on Veterans Day to honor its military teammates at locations around the U.S. These events often consist of luncheons or dinners with guest speakers, the presentation of colors, a ceremony and more, Bridgestone says.

Continental Tire the Americas supports veterans through organizations such as the Wounded Warriors in Action Foundation, Support Our Troops, Veterans Honor Flight and This Able Vet.

In addition, Continental offers a one-year apprenticeship program for veterans, and actively recruits at military base job fairs, the tiremaker says.

“Our former military employees have proven to be dedicated employees who demonstrate teamwork, leadership, and are extremely skillful,” says T.J. McKinney, director of human relations for Continental’s tire plants in the Americas.

Cooper Tire & Rubber Co. has a long legacy supporting veterans and the military.

“America’s veterans and those who serve in the military are a cornerstone of our country. These men and women serve in times of war and in times of peace, at home and abroad. They sacrifice to protect our freedoms. As a company that has been based in the United States for more than a century, Cooper is dedicated to employing veterans and military servicemembers within our workforce. These men and women bring with them a powerful combination of purpose, work ethic, leadership, and an unmistakable drive to succeed. As a result, they are often some of the best performers and best teachers of others within our organization. Veterans and military servicemembers stand up to protect our country, and we support, honor and thank them,” shares Brad Hughes, president and CEO of Cooper.

The tiremaker got its start supporting veterans and military in WWII. During the war, Cooper produced pontoons, tank decoys, landing boats and other equipment for the war effort. In 1945, the company was honored with the Army-Navy “E Award,” or what was called the “Production Award” for excellence in the manufacture of war equipment.

In 2013, the tiremaker was honored by the Ohio Employer Support of the Guard and Reserve (ESGR) with an “Above and Beyond” award in recognition of their extraordinary support of employees who serve in the Ohio Guard and Reserve. In 2014 and 2017, Cooper’s Tupelo, Miss., plant leaders received ESGR’s Patriot Award as a measure of gratitude for supporting flexible schedules necessary for employees to complete military service. The company’s Texarkana, Ark., plant was also honored in both 2012 and 2013 by the Disabled American Veterans as “Outstanding Large Employer of the Year.”

Cooper is also a member of the U.S. Army’s Partnership for Youth Success (PaYS) program. Under this program, Cooper has committed to providing job interviews and potential employment to soldiers who select Cooper during the enlistment process from the organizations participating in the PaYS program.

Cooper also recognizes its employees for their service. On Veterans Day in 2016, Cooper unveiled monuments honoring Cooper veterans at its plants in Findlay, Ohio, Tupelo and Texarkana. As part of this special occasion, Cooper donated $15,000 to the Intrepid Fallen Heroes Fund. Cooper plans to hold special ceremonies for Veterans Day each year as a way to recognize employees who serve, the tiremaker says. 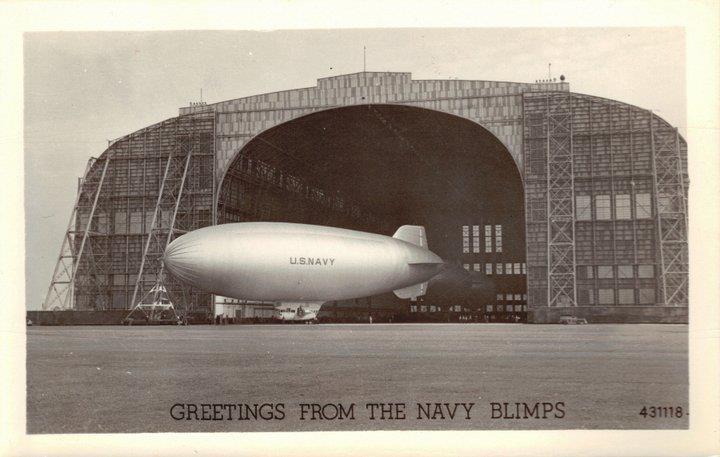 Goodyear Tire & Rubber Co. is very proud of its support and commitment to the U.S. military.

“Our ongoing support of the armed forces through brand partnerships, talent recruiting and community involvement is a source of pride for all of us at Goodyear,” says Steve McClellan, president, Goodyear Americas. “Today, we employ more than 1,000 veterans and Reservists throughout our manufacturing facilities, retail stores and corporate offices, and thousands more Goodyear associates are connected to the military through family and friends.”

In 2014, Goodyear surpassed its three-year goal of hiring 1,000 veterans. The tiremaker has since renewed its commitment to hiring veterans and have pledged to hire an additional 1,000 veterans over the next three years.

Since 2010, Goodyear has also helped raise funds for Support Our Troops through its NASCAR partnership. To date, more than $1 million has been raised for the organization.

Goodyear has also historically supported the military during times of war as well. During WWI and WWII, Goodyear produced airships, its blimps, for the U.S. military. Goodyear-built blimps were part of the Navy’s convoy escort duty. These incredible aircraft kept the warships on the seas safe, with no reported loss of shipping when a blimp was on watch, the tiremaker says. 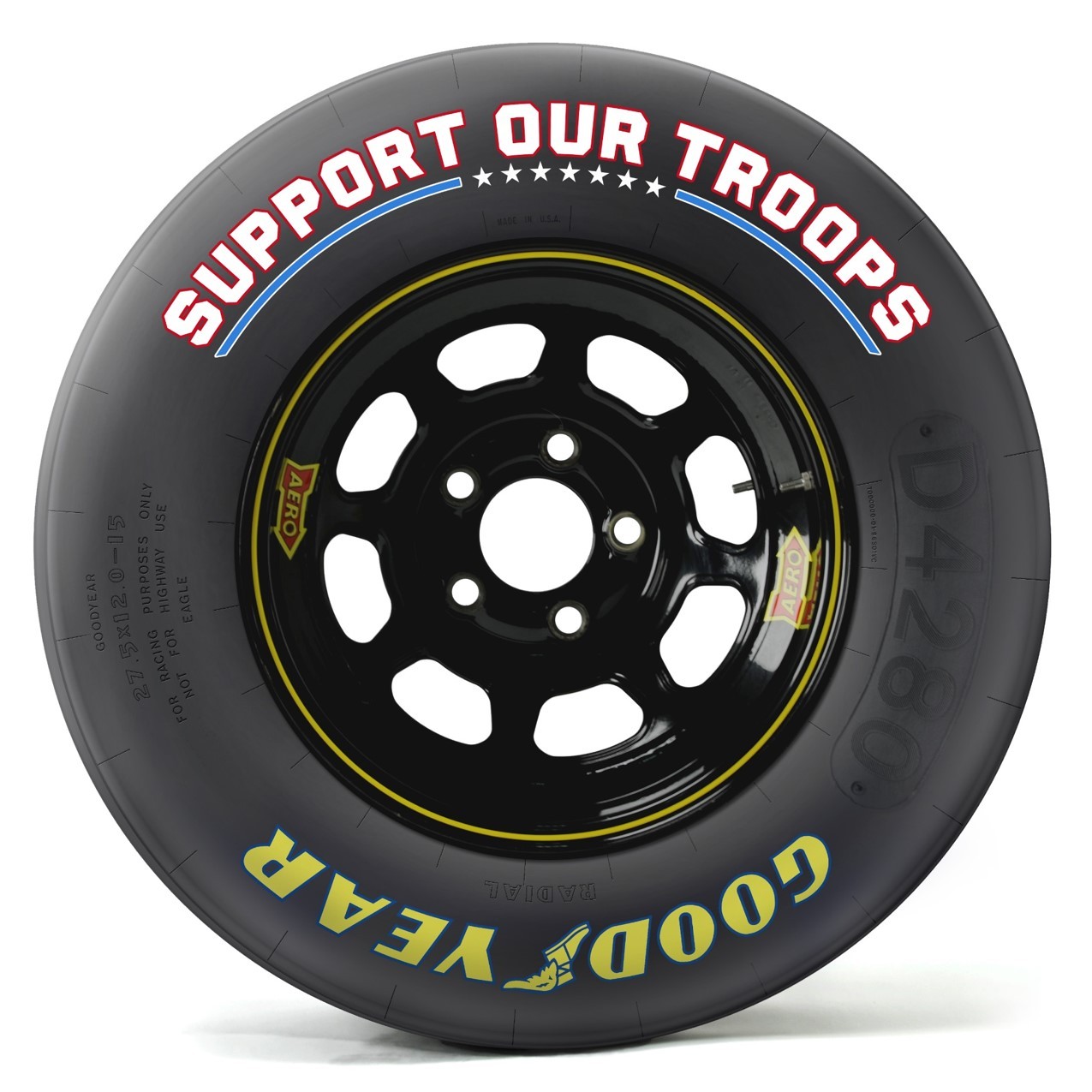 Since 2015, Hankook has had a partnership with the Disabled American Veterans. That partnership includes a $100,000 donation and $50,000 in cross-marketing promotion. Six tire dealers around the nation also host DAV Mobile Service Office stops coordinated and promoted by Hankook. These stops enable veterans to receive valuable services (such as help with filing claims for Veteran Affairs benefits)  directly where they live, the tiremaker shares.

Hankook Tire’s first North American plant in Clarksville, Tenn., is in close proximity to Fort Campbell, an Army base. Hankook has embraced the community’s military and veteran population through a number of local partnerships, it says.

“Hankook Tire deeply values our servicemen and women, and we are honored to celebrate their bravery through a number of initiatives. Our North American production plant’s proximity to Fort Campbell, a major military base, provides us with unique opportunities to serve those who have served our country,” shares Ken Mangold, HR manager at Hankook’s Tennessee plant.

The company regularly hosts and attends career fairs aimed at recruiting servicemembers, including some events on the military base itself.

Other local partnerships the company participates in are Operation Stand Down, which specializes in helping veterans build stable lives following their military service, and with Workforce Essentials, a local non-profit organization that has a dedicated initiative aimed at placing veterans in fulfilling jobs.

Hankook also estimates that 10% of its employees at its U.S. headquarters are military veterans.

The tiremaker’s Veterans’ Business Resource Group officially launched on Flag Day in 2015. Sponsored by Pete Selleck, chairman and president of Michelin North America, the group comprises 150 employees, including both veterans and supporters.

By leading regular education and awareness programs for employees, the group aims to: develop and mentor employees on all matters related to Veteran recruitment, retention and reintegration; promote Michelin as a military-friendly employer; create networking opportunities; bridge the gaps between civilian and military experiences and lifestyles, and more. In addition to their internally focused projects, the group also partners with local non-profit organizations with similar missions to support veterans in our local communities, Michelin says.

For its various efforts in support of former and current military personnel, Michelin was awarded the South Carolina Employer Support of the Guard and Reserve (ESGR) Above and Beyond Award. The award recognizes employers who have gone above and beyond the legal requirements of the Uniformed Services Employment and Reemployment Rights Act by providing their Guard and Reserve employees with additional, non-mandated benefits.

Two Michelin employees in South Carolina were named as state Patriot Award winners for their efforts to support Michelin Reservists and Guard employees through a wide range of measures, such as flexible schedules and time off prior to and after deployment.

Michelin’s subsidiary, American Synthetic Rubber Co., aided the U.S. in synthetic rubber production during WWII. The tiremaker also played a key role in the fielding of Mine-Resistant Ambush Protected (MRAP) vehicles during the recent conflicts in Iraq and Afghanistan. This effort contributed to saving the lives of many Soldiers and Marines involved in IED attacks, the company shares. 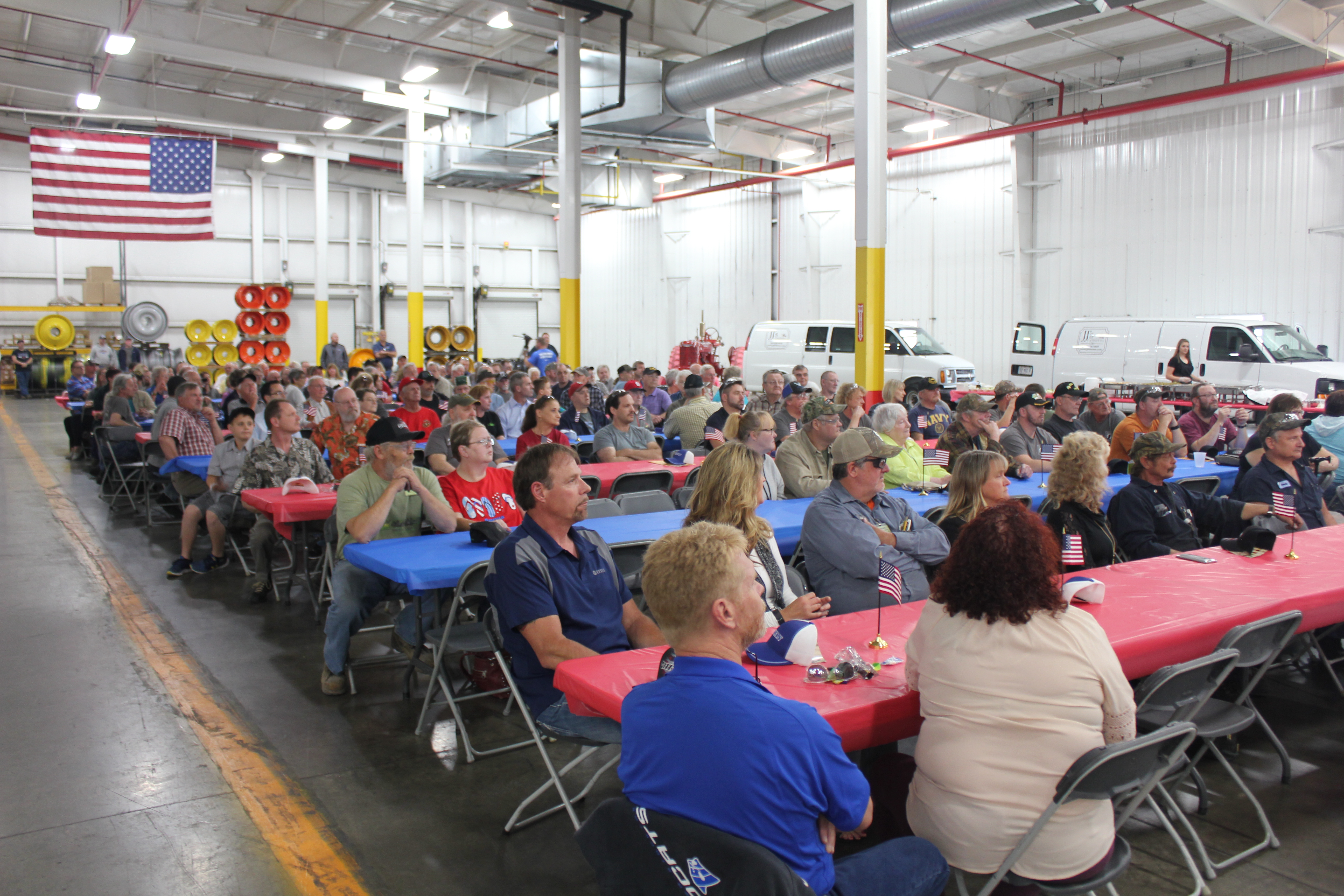 Each year Titan hosts a Veterans Recognition Day to honor honored current and retired Titan employees who are veterans with a luncheon and dedication of a memorial.

Titan sponsors Fishing for Freedom, which provides veterans as well as active duty troops a weekend of events that range from fish frys and trapshooting, a Heroes Banquet, and fishing on the mighty Mississippi River or Mark Twain Lake. The tiremaker has sponsored the Great River Honor flight for the past five years, allowing military veterans to visit Washington, D.C., to view commemorative sites. Additionally, Titan has sponsored Heroes at Heartland and Mid-American Salute.

For 2007-2008, Titan also earned the “Large Employer of the Year Award” from the Veterans of Foreign Wars (VFW) Department of Ohio for their practice of hiring veterans. 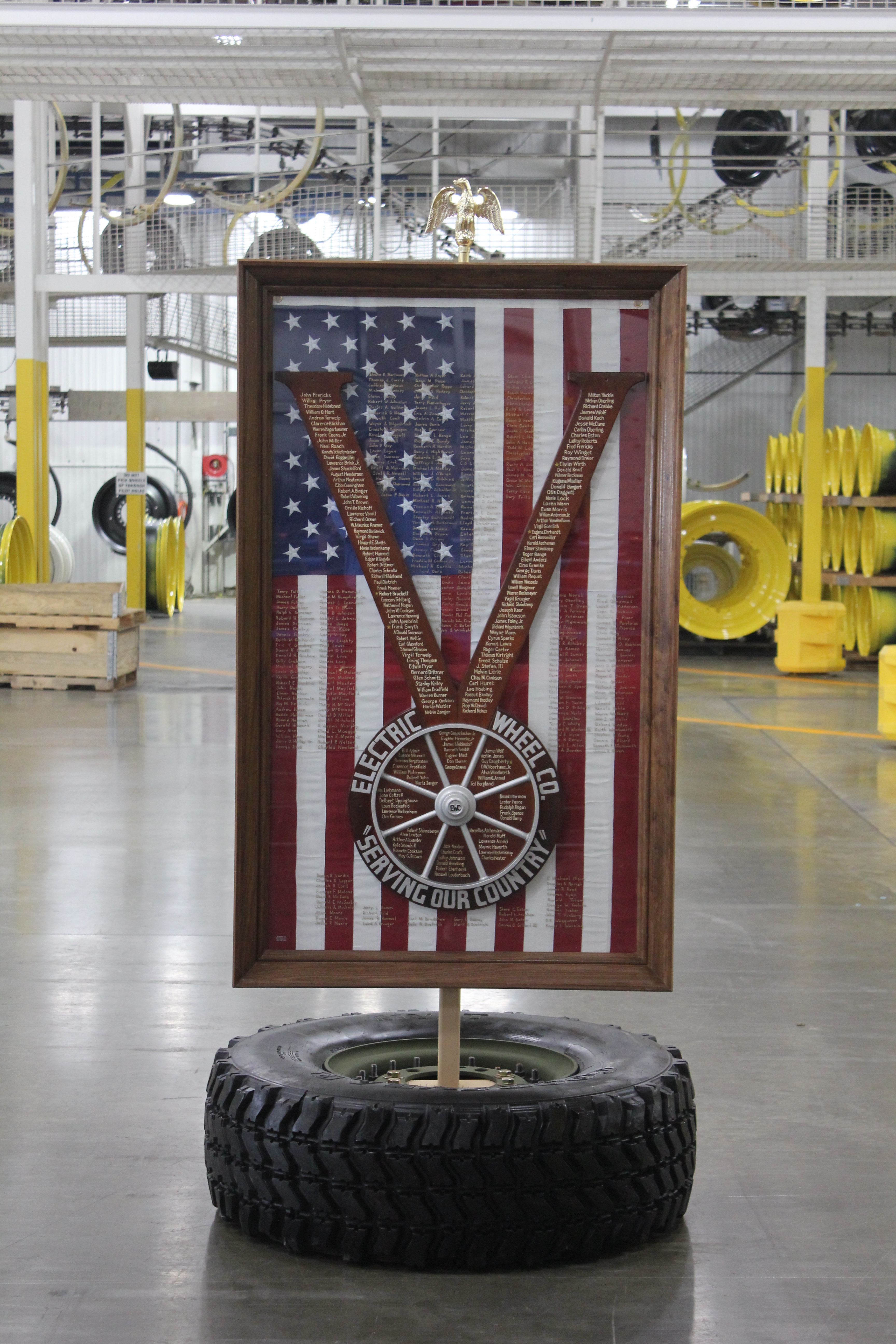 Giving Back to Those Who’ve Served: Tiremakers Supporting U.S. Veterans