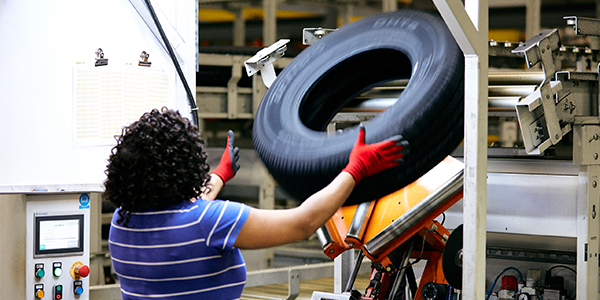 After opening its first plant in the U.S. about a year and a half ago, Giti Tire USA has been in a growth mode with plans to launch new products and become a household name in the U.S.

After opening its first plant in the U.S. about a year and a half ago, Giti Tire USA has been in growth mode.

Earlier this year, the company launched its all-season grand touring tire, the Maxtour LX, under its GT Radial line. Later this year, it plans to debut two other GT Radial tires: the Adventuro HT, a new highway-terrain tire, and the Maxmiler Pro, designed for today’s light commercial vehicles.

This resurgence in the U.S. market is backed by its team of tire industry veterans, a planned product roadmap and a newly established presence on U.S. soil with its manufacturing plant and R&D center in Richburg, South Carolina. With these tools in its arsenal, Giti officials say the sky’s the limit.

“Everything here [in the plant] is being developed for North America,” said Tim Fulton, Giti Tire USA’s chief operating officer, during a media visit to the facility in late March. “Having this footprint here, having this manufacturing here gives us the ability to do that. It’s one thing to dream it, it’s another thing to do it, and we have it here now and with having global support, there’s nothing stopping us from having the dream and putting it in place. So, this is a major step for us.”

With 700 employees and counting, the 1.7 million-square-foot plant operates using a straight line manufacturing system – raw materials are mixed into the tire’s sub-components on the south end of the plant, and on the north end, the finished product is stored in a 400,000 square-foot warehouse.

“This facility is half of what we want it to be,” Hank Esienga, vice president of manufacturing for Giti Tire Manufacturing (USA), told members of the media.

In between the north and south end of the plant, a mix of craftsmanship and automation goes into making the 8,000 tires produced per day.

“Everything has a bar code or RFID (radio frequency identification) on it,” explains Eisenga about the plant’s automation. “When a tire machine needs the next product, it just sends a signal. [Robots in the plant] can pick up that signal and bring the component down and take it to the next step. You’ll see a lot of that as we go around.”

Once the tire’s sub-components – such as the sidewall and tread – are created and identified with an RFID tag, they’re inspected and stored until needed. Then, a tire making machine, essentially, calls them when they need them. Eisenga said the plant would be doubling its tire-making equipment in the next couple weeks.

To make sure that the tire’s components line up for what’s targeted to be produced that day, human hands take over. Dashboards around the facility track each tiremaker’s performance as well as the plant’s KPIs, or key performance indicators, to be sure they’re on track with production.

After a tire is made and inspected by the tiremaker, it’s put on a robotic trolley that takes it to the curing phase – and that’s largely automated, too. When a curing press needs more tires, it signals for one to be carried up in a conveyer belt above the plant and dropped into a waiting line.

“So they’ve been built, they’ve been stored, and now they get called by the press,” Eisenga says. During the 15-20 minute curing process, the tire is baked and receives its tread, shoulder and sidewall markings. Then, it goes to final inspection before heading to the warehouse.

However, the process doesn’t end there. Walk out of the manufacturing facilty, and within a few steps is the company’s R&D center, where compound testing, chemical analysis and endurance testing among other checks take place for new and existing product.

“It gives us the ability to work together as teams and figure out what’s best for our customer,” said Eisenga about having manufacturing and R&D on the same property. “You get the feedback from the marketplace, we can take it, we can make changes if we need to, we can improve upon the product that we have and keep making it better. That’s the focus…. We want that interaction. We have to be quick. You know, you could have organizations… that send something across the world and wait for a few weeks or months or years to get information back. We don’t have to do that. We’re right on the shop floor, right next to the plant able to communicate and work together as a team to keep this going. It gives us a competitive edge.”

So much so that over the next five years, Giti Tire USA plans to release one to two new products each year for the North American market as it aggressively ramps up its production capacity at the plant, said Giti Tire USA CEO Fulton.

Scroll down to see more photos of the facility.