Chester County, S.C., got its rumored tire plant, but it wasn’t Goodyear that came knocking. Instead, it was Singapore-based Giti Tire Group, which this morning revealed plans to build a $560 million radial passenger and light truck/SUV plant. 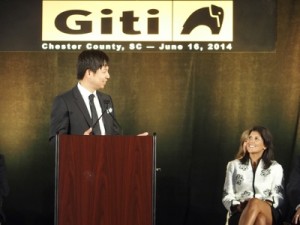 At full capacity, the new plant – code-named “Project Summer” – will produce both replacement and OE tires, and will employ some 1,700 people. With an estimated 1.8 million square feet under roof, the plant will include a distribution center.

“This significant investment represents our strong commitment to customers in North America,” said Enki Tan, executive chairman of Giti Tire Group. “This is a key milestone for Giti Tire and an important part of our growth strategy worldwide. Existing business and strong demand for Giti Tire’s passenger and light truck tires in North America has made this significant investment in South Carolina possible.”

“This is another huge win for our state and Team South Carolina. We are the nation’s tire capital, and Giti’s decision to come to our state is another great sign that our economic development efforts are paying off for the hardworking people of South Carolina,” said Gov. Haley, who has racked up at least four new tire plants or plant expansion projects over the last four years.

Chester County is near Charlotte, N.C., and has a population of some 35,560 people over its 586 square miles of land. With a current unemployment rate of around 7% – it was as high as 20% in mid-2009 – the county certainly could use additional employment opportunities. It is already home to a number of recognized multi-national corporations such as Owens Corning, Guardian Glass, PPG Industries, Omnova Solutions, ThyssenKrupp Steel and GAF.

“This significant investment in a North American production facility means they are serious about expanding their global brand and continuing to lead the industry for many years to come,” said Brian Singleton, chairman of the Chester Development Association. “We are elated that they chose Chester, South Carolina, and are anxious to work with them building this new world class tire manufacturing operation.”

Formed in 1951, Giti Tire Group is now the world’s 10th largest tiremaker, with 2013 sales estimated at $4.3 billion. It is represented in North America by Giti Tire (USA) Ltd., its sales, marketing, and distribution company, headquartered in Rancho Cucamonga, Calif. It is not immediately known if Giti Tire (USA) headquarters will be moved east to the new plant.

This is the first North American greenfield plant project for Giti Tire. “Chester County is an excellent location for Giti Tire, offering an extensive and efficient infrastructure network including interstate highways, rail, close proximity to airports and a major metropolitan area to support the company’s needs and growth for many years to come,” said Lei Huai Chin, managing director of Giti Tire Group.

The Giti Tire Group in total has four R&D centers in China, Germany, the U.K. and the U.S., which employ some 600 scientists and support staff. The company has seven tire plants at five locations in China – Anhui, Fujian, Chongqing, Yinchuan and Hualin.