I recently had a chat with a technical representative for a major aftermarket gasket manufacturer who shed some light on some of the problems facing the cylinder head gasket market. According to this representative, the relatively short production life of modern engines also shortens the time that an aftermarket gasket company needs to remedy application-specific cylinder head sealing problems.

Early this year, I had a chat with a technical representative for a major aftermarket gasket manufacturer who shed some light on some of the problems facing the cylinder head gasket market. According to this representative, the relatively short production life of modern engines also shortens the time that an aftermarket gasket company needs to remedy application-specific cylinder head sealing problems.

Another issue is that, if the company develops a superior gasket sealing design for specific applications, the engine might disappear from the market before the company’s basic research, development and tooling costs can be recovered. If nothing else, that conversation provides an insight as to how fast the cylinder head gasket market is changing. 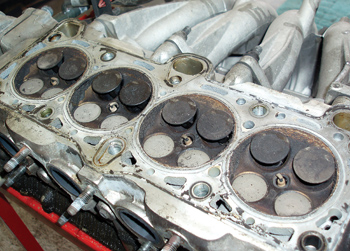 Sealing problems are inherent in bi-metallic engines because aluminum cylinder heads expand faster than cast-iron cylinder blocks during the warm-up cycle. The difference in expansion rates is further aggravated because the cylinder head tends to heat up much faster than the cylinder block. The difference in expansion rates between aluminum and cast iron creates a scrubbing effect that eventually wears out the stainless steel “fire ring” that keeps combustion gases from entering the cooling system.

More engines are also being designed with timing chains rather than timing belts. One of the major problems we’re seeing with timing chains are camshaft timing changes associated with catastrophic failures of the guides, tensioners or chains. In some cases, drastically advanced or retarded camshaft timing can bend the valves and break the valve guide bosses built into the cylinder head on valve-interference engines. See Photo 1. 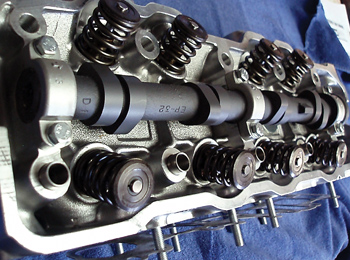 Failure Symptoms
The early stages of cylinder head gasket failure are often very difficult to detect because cylinder head gasket leakage can be very temperature- and load-sensitive. During the early stages of head gasket failure, the engine usually begins to consume an increasing amount of coolant with no visible external leakage. The coolant leakage into the combustion chamber eventually progresses to the point that it begins to foul the spark plug and causes a cylinder misfire.

On OBD II vehicles, a P0300-series misfire DTC will be stored. In the final stages, extreme head gasket leakage will force the coolant from the radiator overflow when the engine is operated cold with the thermostat closed. If coolant leaks into the engine oil, the oil will appear milky and perhaps have the color and consistency of a chocolate milkshake.

Estimating Repairs
Because most cylinder head gasket failures generally occur between 100,000 and 200,000 miles, most engines are also ready for new timing belts and pulleys, accessory drive belts, coolant hoses, water pumps, spark plugs and fuel filters. In addition, the shop could discover that the high-mileage oxygen sensors and catalytic converters might also be damaged by engine coolant flowing into the exhaust gas stream. From a labor and liability standpoint, it’s far more cost-effective for a shop to replace related parts when needed.

Cylinder Head Inspection
After removing the cylinder head, the technician should always visually inspect for warping, cracking and valve leakage. For example, a lighter-colored exhaust valve generally indicates that the valve is running hot because it isn’t seating correctly. A crack in a valve seat or exhaust port will generally wash away combustion chamber carbon in that area.

A catastrophic overheating problem coupled with a broken timing belt usually indicates that one or more camshafts have seized in the cylinder head due to cylinder head warping or lack of lubrication. In other cases, an aluminum cylinder head might also suffer from coolant etching or gasket scrub wear on the gasket surface. Last, if the engine is a high-mileage unit, the valve seats, faces and guides likely suffer from excessive wear. See Photo 2. 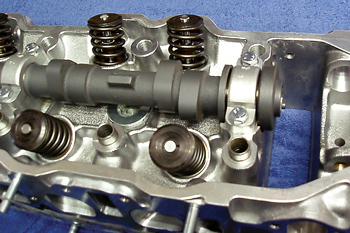 Quality Machine Shop Services
In any case, a good machine shop can restore most cylinder heads to their original operating condition. A quality cylinder head service should include crack detection, resurfacing and valve sealing restoration. Some machine shops may also double-check their work by vacuum-testing intake ports for valve seat and guide sealing. New steel spark plug thread ¬inserts might also be recommended for those cylinder heads that are vulnerable to stripping spark plug threads. See Photo 3.

Gasket surface machining is the most critical area of cylinder head repair. First, the cylinder head must have a very smooth surface to prevent excessive head gasket wear. But, resurfacing the gasket surface also reduces the center-to-center distance between the crankshaft and camshaft bore centers, which retards intake and exhaust valve timing. The center-to-center dimension could be critical on engines with variable valve timing because the PCM continually monitors camshaft position and, in theory, could store a DTC if the camshaft can’t be advanced or retarded according to programmed values.

The amount of stock that can be removed during cylinder head resurfacing largely depends upon the amount of warping present in the cylinder head, the stock available for removal and the manufacturer’s recommendations concerning resurfacing. See Photo 4. 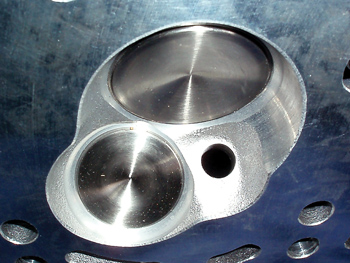 Before installing the cylinder head, use an aerosol gasket remover to soften traces of baked-on cylinder head gasket. A scraper using a straight razor blade can be especially effective at cutting away gasket residue without damaging the engine block or head. Next, make sure that the blind boltholes in the cylinder block are clean and free of solid or liquid debris. In some cases, a thread chaser might be needed to clean corroded threads.

After cleaning, a machinist’s straight edge should be used to measure warping in the cylinder head and engine block. If warping exceeds the manufacturer’s specifications, the head needs to be repaired or replaced.

Before final assembly, an aerosol parts cleaner should also be used to remove any traces of dirt or liquid contamination from the block and head surfaces. Keep in mind that most modern cylinder head gaskets should be installed dry, without additional sealants. A pair of guide pins can be fabricated to guide the cylinder head into place to prevent damaging the cylinder head gasket. These pins should be slotted at the top for easy removal with a screwdriver. Because over-torqueing can ruin modern intake manifolds, follow correct bolt torque sequencing and values when assembling the manifold, plenum and related parts.