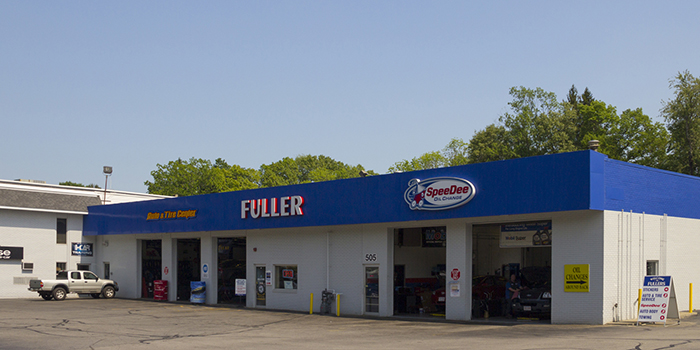 Fuller Automotive has been a trusted name in the Auburn, Mass., area for more than 100 years.

“In 1914 my great grandfather Willis Fuller transitioned from working on horse drawn buggies to working on cars,” explains Chris Fuller.

Over the past century, the automotive business evolved to include collision and mechanical repair, towing service and auto sales.

In 1997, they purchased a SpeeDee Oil Change franchise license and began offering convenient oil changes out of their 12-bay location, and in the past five years they’ve become a significant player in the tire market.

The businesses has been owned and operated by four generations of Fullers at the helm. Today, Chris and Joshua Fuller, great-grandsons of Willis, own and operate Fuller Automotive.

Chris manages the tire sales and automotive repair side while Joshua oversees collision and towing. They share Fuller Auto Sales, a separate used car sales business, with a managing partner.

Chris compares their automotive compound to a hospital. “People pull up and they say, ‘Where do I need to go?’ and we’ll say you’re at the right hospital, you’re just in the wrong wing,” he says.

Chris says evolving and adding services has made for a one-stop shop experience for customers.

“We’ve been able to use the existing platform of the business to modernize it and expand,” Fuller says. “When my brother and I came in, we needed to make some modern changes that are conducive to today’s way of doing business rather than business in the 1970s and 1980s.”

Fuller says there’s a big advantage to doing everything under one roof. Not only are they able to keep a good history of what has been done to the car, but it also allows the customer to make sure that nothing goes unchecked.

“We give full disclosure,” Fuller says. “You may not know of things that require service on your vehicle. You might be just coming in for an oil change, but we don’t want to miss anything.”

He says they utilize AutoVitals to do a complete inspection of the vehicle including documentation, pictures and video. 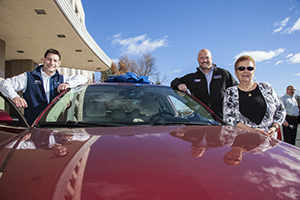 Fuller Automotive donates all the parts and labor to resurrect a vehicle for individuals through its Recycled Rides program. Joshua Fuller, Chris Fuller and Carmen R. pose with a car from the program.

“We can do the work or give them estimates or help them prioritize it,” he says. “We’re a business and we’re trying to make money, but we do it by solving people’s vehicle problems.”

Bringing in tire sales was a relatively new venture for Fuller Automotive. While they sold tires to customers who needed them, Fuller says they had never marketed the products on a broad scale.

“We were getting cherry picked,” he says. “Customers would go to one place for tires and another place for their oil change, they’d come in here when they’d need diagnostics. It was evident that our lower margin repairs were increasing as a majority of the repair work we were doing. It’s not high gross profit work and we needed to close the gap.”

Fuller says he was introduced to American Tire Distributors through Carquest a few years ago.

“They helped us coordinate and implement a plan to be in the tire share of the market in the area,” he says. “We first aligned ourselves with Continental and General and became a Gold Dealer,” he says. “That enabled us to bring rubber to the customers and bring it in a way where they had the rebate and the support that you could get at big box stores but we didn’t have to buy in bulk at the time.”

In their second year of tire sales, Full Automotive became a Goodyear G3 dealer. “And have done very well with that program,” he adds.

In year four they added Michelin and BFGoodrich product lines as well as ATD’s Hercules tires.

“We kept hearing ‘there’s no money in tires,’ but I disagree with that,” he says.

For $80 the customer can choose the “Pit Stop” and have their new tires mounted and balanced or the can go for the Fuller Tire Package. “That includes the mounting, balancing and an alignment at the time of install and then the customer will receive free tire rotations every 6,000 miles, a free alignment annually and road hazardprotection. That’s $189,” says Fuller.

While the family has been in business for 100 years, Fuller says there’s competition everywhere and keeping their name out there is important.

“We do some billboards near us, we do television ads through our SpeeDee franchise, we sponsor the Boston Celtics and we do a lot of direct marketing through SpeeDee,” he says. “On the Fuller Auto Sales side, we’re doing radio, local print, email campaigns and post card campaigns.”

One of the most appreciated things they do is their sandwich shop gift card campaign.

“If we don’t recognize a customer when they come in, we ask where they found out about us,” Fuller explains. “If they we referred by one of our customers we’ll send that customer a $10 gift card for the roast beef shop next door as a thank you for putting their trust into us and for giving us a personal referral.”

No matter what the Fullers do, Chris says they do it by “working hard and being good to people.”

“We really try to apply that to everything that we do,” he says. “It doesn’t allow us to over complicate anything. That mantra lets us carry on in a manner that we really are trying to help people.”

He says it also applies to employees and describes the business as have a very family-like atmosphere.
“When you treat your employees like family, you are going to get that result of extra effort and that appreciation that they have for you,” he says.

There are 60 employees throughout Fuller Automotive, some of which have been there for decades.

“We want to have a good time at work,” he says. “We don’t want work to be a negative thing. We have some incredible employees that we can’t do without.”

In 2014, Fuller Automotive was honored as the best medium-sized family business in the state by the Northeastern University Center for Family Business.

Outside of work, the Fullers are very active in their local community, especially youth sports. Fuller personally coaches both youth football and baseball, and the business sponsors local fields, scoreboards and teams.

“We believe some of the philosophies in sports carry well into business – camaraderie, utilizing strengths, downplaying weaknesses, and succeeding in your tasks and goals,” Fuller says.