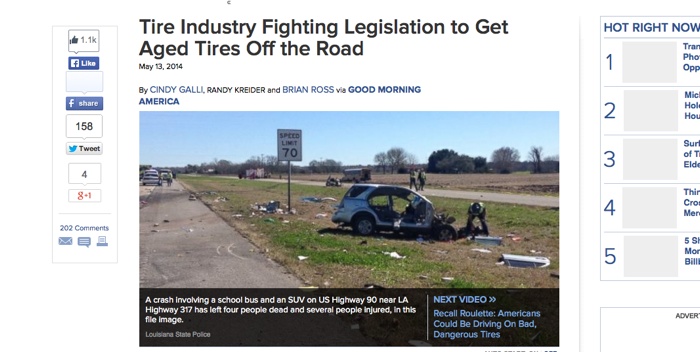 A new special investigation by the National Transportation Safety Board (NTSB) into the role tires play in traffic accident deaths was apparently the motivation behind ABC News’s latest on-air story concerning tire aging. 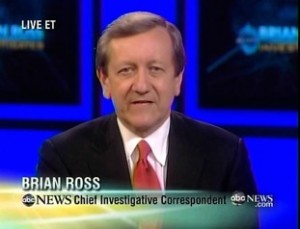 Today, ABC News was airing several versions of an investigative report it conducted on the effects of age on consumer tires. Their report included how tiremakers and automakers have reacted, NTSB’s findings and how the Rubber Manufacturers Association (RMA) supposedly quashed tire-aging legislation in as many as eight states.

The story was first broadcast on Good Morning America, but longer versions are expected to run later today on World News with Diane Sawyer and Nightline.

The RMA has not yet issued a statement regarding the broadcast. The Tire Industry Association (TIA) issued statement earlier this afternoon:

“TIA’s position on tire service life has not changed in the sense that chronological age is not the sole factor in determining the condition of the tire. Maintenance, usage and storage conditions are the most important factors when determining serviceability. In order to help motorists make better decisions regarding the condition their tires, TIA has expanded the consumer education section of our website http://www.tireindustry.org/consumer-safety which includes the official tire service life statements from 11 tire and vehicle manufacturers.”

In additional to the national ABC News broadcast, there have been several local market news stories done by ABC affiliates in various cities across the U.S.   Below is a transcript of what was aired on Good Morning America this morning. The actual report can be viewed here (http://abcnews.go.com/GMA/video/dangerous-tires-aged-tires-linked-auto-accidents-23710711).

Lara Spencer:  Back, now, at 7:41, with safety concerns about aging car tires and whether they can cause fatal accidents. ABC’s Brian Ross has news this morning about a new investigation into tire safety and about what you need to look for that could save your life. Brian?

Reporter Brian Ross: Well, good morning, Lara. The national transportation safety board has launched a first of its kind special investigation into the role of tires in hundreds of traffic accident deaths a year. And among the issues, tires that look perfectly safe, even brand-new but that automakers say can begin to degrade and should be replaced just six years after they were made.

Brian Ross: The tire that failed in this accident was 10 years old.

911 call: Somebody lost control of their vehicle and flew into the right shoulder.

Brian Ross: The tire that failed in this accident outside of Los Angeles was eight years old.

Tiffany Sanders, mother of accident victim: “My daughter lost her life because of it. My grandson is growing up without his mother.”

Brian Ross: And the tire that failed in this fatal accident in Louisiana was ten years old and helped lead to the new federal investigation by the safety board, the NTSB.

Donald Karl, Director of Highway Safety, NTSB: “It’s definitely a significant issue and that’s why we’re looking at it at the NTSB.”

Brian Ross: Safety engineers say depending on how they’re maintained and where they’re used, tires can begin to age and lose elasticity after just six years.   The tread can begin to separate, even though the tires may never have been on the road and appear to be perfectly new.

Sean Kane, Safety and Research Strategies: “That’s what’s so troubling. It really is the invisible hazard.”

Reporter: But no current law or industry standard prevents the sale of aged tires. Our investigation with ABC stations around the country, found plenty of them for sale, described as perfectly safe. In New York, 8 1/2-year-old tires.

Unattributed tire dealer: “Out with the old. In with the new. You know that expression?”

Brian Ross: In Rhode Island, 9-year-old tires. In San Francisco, 11- and 15-year-old tires. Ford, GM and Chrysler, all recommend that tires more than six years old be replaced, regardless of how much they’ve been used. But the government and the tire industry say, there’s no reason to have a tire-aging standard of any kind.

Brian Ross: Wouldn’t that help safety, given the recommendations of Ford, GM and Chrysler?

Dan Zielinski: “It would not because there’s no data to support expiration dates.”

Brian Ross: Yet, even one of the biggest tire companies, Michelin, recommends a 10-year replacement date. But for consumers to know how old the tires are, they have to decode the industry’s strange method of listing the production date. The last four digits stamped into the side of the tire give the date, not by month and year but by week and year.

Brian Ross: To do it by the week?

Dan Zielinski: “Certainly it is.”

Brian Ross: Are you purposely hiding how old the tires are?

Dan Zielinski: “We’re not hiding that in the least.”

Brian Ross: And thanks to the lobbying of the tire industry, proposals in eight states to require inspection of tire age have now been defeated.

Lara Spencer: “Unbelievable that this could happen… Show us again where to look for that code – the date …”

George: So week is simpler than month?

Brian Ross: For the tire industry, they say it’s better for them.

Robin Roberts: Better for them. Not so great for the consumer, who has to really figure out how to read this.

Lara Spencer:  Now, we know. Thanks to you. You can hear more of Brian’s report on tire safety. That’s tonight on “World news” and also on “Nightline.”