Many modern-day fuel systems offer a new look into system status definitions. It’s become very important to extend our understanding well beyond the concepts of simple "open loop" and "closed loop" status. Here we will explore the new fuel system definitions that are present on many of today’s vehicles. We’ll begin our discussion by looking at each one on an individual basis.

There are many symbols and definitions of status — yachts, luxury cars, diamonds — but if you’re reading this, right now you’re probably more concerned with “system status” definitions.

Many modern-day fuel systems offer a new look into system status definitions. It’s become very important to extend our understanding well beyond the concepts of simple “open loop” and “closed loop” status. This month, we will explore the new fuel system definitions that are present on many of today’s vehicles. We’ll begin our discussion by looking at each one on an individual basis. 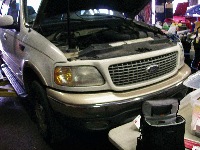 The first definition is “open loop.” Simply stated, the oxygen sensor is not being used for feedback control. According to Babcox Technical Editor Larry Carley, “when no signal is received from the O2 sensor, as is the case when a cold engine is first started (or the O2 sensor fails), the computer orders a fixed (unchanging) rich fuel mixture. This is referred to as ‘open loop’ operation because no input is used from the O2 sensor to regulate the fuel mixture.”

Our second definition is “closed loop.” The oxygen sensor at this point is now being used for feedback control. Carley explains it further: “The computer uses the oxygen sensor input to regulate the fuel mixture, which is referred to as the fuel ‘feedback control loop.’ The computer takes its cues from the O2 sensor and responds by changing the fuel mixture. This produces a corresponding change in the O2 sensor reading. This is referred to as ‘closed loop’ operation because the computer is using the O2 sensor’s input to regulate the fuel mixture. The result is a constant flip-flop back and forth from rich to lean, which allows the catalytic converter to operate at peak efficiency while keeping the average overall fuel mixture in proper balance to minimize emissions. It’s a complicated setup, but it works.”

OK now that we’ve reviewed that, let’s continue our diagnostic journey. The third definition is “closed loop fault,” which occurs when the processor thinks for some reason there is a problem with one of the upstream oxygen sensors. It could be an issue where the sensor is high or low most of the time or even that misfire activity may be present. The vehicle will continue to maintain a closed loop status, but with a “fault” indicated. It serves as a valuable clue that states the fuel system status must be addressed. The goal of the processor is to protect the catalytic converter with the best possible fuel system strategy.

And finally, there’s “open loop fault,” generated for lean or rich codes. The processor thinks that there is an issue with both upstream oxygen sensors. The system will respond by going into open loop and providing no fuel trim correction. Keep in mind that the goal of both strategies is to protect the catalytic converter at all cost.

For our Pulling Codes case study this month, our subject vehicle is a 1999 Ford Expedition, and we will address the following codes in reference to open loop fault: P0171, P01741, P1131 and P1151 for Ford products.

The fuel system status then went to open loop fault. A review of scan tool data shows a code P1131 and P1151 stored as “On Demand Codes.” The descriptors for these codes indicate that there is a lack of switching from the upstream oxygen sensors as indicated by the processor.

Test No. 2
– Check the fuel system

We begin our analysis by checking to see if the fuel system is working as designed. The fuel pressure was checked with the engine running. We obtained a pressure reading of 25 psi, volume reading of 0.7 gallons/minute and fuel pump current of 6.2 amps. The fuel system operation is issued a pass.

• A HEGO sensor indicating lean at the end of a test is trying to correct for a perceived over-rich condition.

• The test fails when the fuel control system no longer detects switching for a calibrated amount of time. 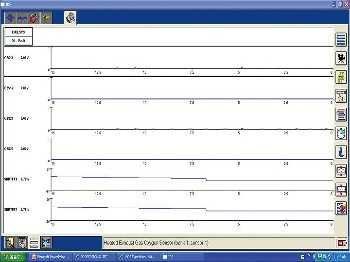 Test No. 3
– Both upstream O2 sensors show a lack of switching. See Figure 1.

The PID data is further reviewed and it is noted that we have a BARO reading of 146.8 hertz. The BARO readings on Ford products for this year, make and model are inferred. If the MAF underestimates or overestimates, it will yield incorrect values for the BARO reading. The value we obtained indicated that the vehicle was believed to be 4,000 feet above sea level per the processor.

The technician working on this vehicle feels the MAF sensor should be replaced. The MAF sensor is replaced and a KAM reset is performed as part of the repair. 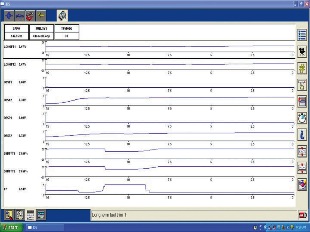 Test No. 4
– After KAM is reset, drive the vehicle for three hard accelerations.

– The PID value should increase.

The vehicle is then driven for three hard accelerations and the BARO reading is re-evaluated. It was then also noted that the BARO reading was at 149.7 Hz when the KAM reset was performed. See Figure 2.

Test No. 5
– There is no response from either upstream ­oxygen sensor on hard accelerations.

– The O2 sensors were analyzed during closed loop operation.

– Both upstream oxygen sensors need to be ­replaced.

The fuel system status started out in open loop, then went to closed loop and finally entered open loop fault operation. The BARO reading decreased on each hard acceleration attempt. The MAF sensor did not resolve the issue on our subject vehicle. The oxygen sensor activity was noted during closed loop operation. There was no switching activity noted in reference to the upstream oxygen sensors.

There were a total of three hard acceleration attempts made during “closed loop” and the sensors did not respond. Both sensors were checked for feed, ground and good connections. The sensors had what was needed in order to work and still would not work. Finally, it was concluded that both oxygen sensors should be replaced. The fuel system status started in open loop, then closed loop. As the vehicle continued to warm up, the upstream oxygen sensors started to switch showing normal activity.

The KOER self-test was performed again to verify that the repair was complete. The oxygen sensors are now working as designed and the codes are no longer present. Is it possible for two oxygen sensors to fail at the same time? Please e-mail me your thoughts for discussion. This Pulling Codes case is now closed.

TPMS: Changes in the TPMS Landscape Over the Past 10 Years

Service: AAPEX to Tire Dealers: We Got Your Back

Troubleshooting Tire Vibration with Proper Wheel Balancing
Connect with us