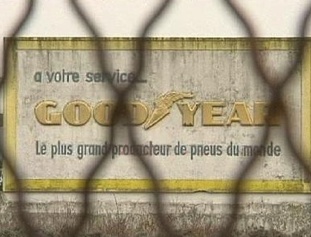 Angry union workers at Goodyear’s tire plant in northern France kidnapped a pair of facility managers, holding them in a conference room while demanding greater severance pay from the tiremaker, which plans to shutter the rest of the facility sometime this year.

The so-called “boss-napping” occurred shortly after a scheduled meeting between representatives of the General Confederation of Labor (CGT) union and plant officials. The room was barricaded with tires produced at the Amiens, France, plant, which is located 60 miles north of Paris.

Reportedly, the union workers said they will free their bosses in exchange for a $108,000 severance package plus $3,400 for each year worked.

In 2012, French labor minister Arnaud Montebourg tried to encourage Titan International to take over the plant, leading to Titan chairman Morry Taylor’s now famous diatribe against French workers and labor unions. “The French workforce gets paid high wages but works only three hours. They get one hour for breaks and lunch, talk for three and work for three,” Taylor stated in a letter to Montebourg.

Last year, though, Taylor indicated that Titan may, in fact, be interested in taking on the plant, a position that has now likely soured. Speaking with French radio network Europe 1 yesterday, Taylor made it clear that at home in the U.S. the Goodyear workers’ action would be labeled a kidnapping and prosecuted as such. “This is a very serious crime, you’d be in danger of life imprisonment. But in France your government does nothing – it seems crazy,” he stated.

For its part, Goodyear confirmed to the Associated Press that the two managers – production manager Michel Dheilly and human resources director Bernard Glaser – were being held against their will. The tiremaker told the AP that it “calls for respect of the law and their responsibilities to the employees’ representatives who are behind this initiative and strongly condemns any form of violence.”

In a statement issued Jan. 6, the union “vowed never to give up its fight to keep the factory open,” according to the AP.

“We just want to continue to work and not swell the ranks of the unemployed and marginalized, and if for that we have to resort to extreme methods, we won’t hesitate to do that,” the union said.

According to CGT representative Franck Jurek, the two managers are being held in a meeting room with the door blocked by large agricultural tires, and although the men are receiving water and still have their cell phones with them, the workers say they will remain there until the situation is satisfactorily resolved.

Jurek told French media that, “they will not come out (of the room) even if it takes three or four days. We will find mattresses and sleep there.”

The CGT’s head representative at the Amiens plant, Mickael Wamen, added that the men will be held until workers receive a guarantee regarding the start of negotiations on bonuses and severance packages for all workers.

As of press time this morning, the current status at the plant is unknown.