Over the last few months, we discussed what industry experts and retailers are predicting for the near future. In light of those views, this month we’ll focus on several new vehicles that are heading our way.

As much as I love the growl of a V8 and respect the power of a forced induction 2.0 liter, I am preparing to embrace future (here today) economy technology, as well. For our industry to survive, we need this – more than we ever thought we would just a few years ago. I see consumers keeping their fast cars and work trucks, but driving more economical vehicles for daily use.

One of my colleagues recently bought a Jeep Wrangler for his daily driver and parked his F250 PowerStroke diesel. The combined loan and fuel cost for the Jeep is less than the F250’s total monthly fuel costs alone. That being said, many of our customers will start to buy smaller vehicles, some of which run on alternative fuel sources.

So, what do the automakers have in store to meet the demand of this new breed of consumer? Be prepared for a repeat of the late 1970s and early 1980s when Detroit lost the musclecar market and the Datsun 240Z and Honda Civic quietly gained a toehold in the U.S. market. They were cars that were inexpensive to own and fun to drive – a success formula we saw repeated during the street tuner period. 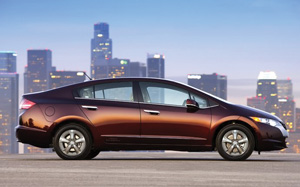 It’s now 2009 and the automotive industry is pushing hard to wean us off of fossil fuels and combustion engines. Get ready for “hybrid” and “fuel cell” to become the new buzzwords for the next couple of years.

The newest one is the Honda FCX Clarity. Does this look like a Prius to anyone besides me? This is a full hydrogen fuel cell vehicle, and is just the beginning of our future. Hybrids started with the Honda Insight, which didn’t sell very well, but when this technology was put into an Accord, or as Toyota did with the Camry, everybody wanted one.

In spite of the current crisis among Detroit automakers, Ford set a milestone last month by rolling its 100,000th hybrid SUV (Escape/Mariner) out of its Kansas City, Kan., plant. Considering that many other nameplates barely sell 10,000-15,000 units per year, this is significant.

On a side note, I’m seeing a lot more hybrid Camrys in the shop these days. Within a year or so, I expect them to start getting into the second owners’ hands, where you typically see an increase in demand for aftermarket wheels. Expect to see more about alternative fuel vehicles in future articles. 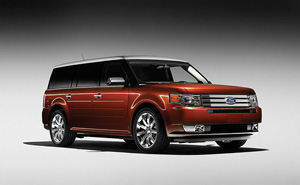 As for more traditional modes of transportation, the selection of highly efficient vehicles has grown significantly. One of the most recognizable crossovers is the Ford Flex, a seven-passenger CUV capable of 24 mpg even without hybrid assist.

The platform has already been proven to attract buyers looking to accessorize – the celebrity DJ and self-proclaimed car buff FunkMaster Flex restyled one of these in 2008 to showcase the potential for personalizing such vehicles. The Flex requires a standard 5×4.5 bolt pattern and high positive offset, which makes wheel options a breeze.

The SE and SEL models come with P235/60R18 tires, which limits the number of brands you can offer. The Limited model rides on P235/55R19 tires. This is definitely a “limited” tire size, since very few brands offer this size. I know most of the people who buy this truck would like to ride on 22- or 24-inch wheels, but take note: The OE tires have a high load carrying index and these larger tire options may not have enough capacity to handle the weight. Most brands of size 255/45R20, common for Chrysler LX chassis cars have enough load capacity, but pay attention to this so you don’t install a tire that can’t handle the load.

As for the consumer looking to downsize, prepare to see the return of the Ford Fiesta to the U.S. This newest version was launched in Europe eight months ago and has already sold more than 117,000 units there. It helped Ford of Europe to post milder losses than its competitors throughout the 19-country market. I don’t have technical data on it yet, but it looks like it has a four-lug application and high offset, making it an easy package once it arrives.

The next vehicle on the “cheap fun” list is the new Kia Soul. Priced at $19,000, the Soul has some of the styling queues of the Toyota XB. It is riding on 18-inch wheels from the factory wrapped in Nexen 225/45R18 rubber, which is good for us, since we can sell more expensive wheels and lower the total package cost by installing the OE tire. 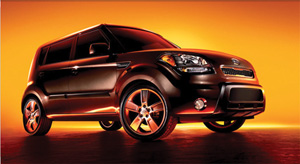 Finishing this list is the Toyota Yaris, which uses a 4×100 bolt pattern and high positive offset. The Yaris is offered in base and upgraded models like the Onyx version sold through Southeastern Toyota. To increase the dealership profit with add-ons, Toyota has added 17-inch Enkei wheels and 205/40R17 Yokohama tires, dash plaques, logos, stainless steel exhaust tips and even a key chain, all for a $3,249 upcharge. With the deals we have found over the last few months, any tire dealer can do the same to a stock base model for half of this amount and still make a profit.

The new Volkswagen CC has rolled into showrooms with major buzz. Someone may want to call Mercedes-Benz and see if VW asked permission to copy the CLS, then slap a $33,000 price tag on it. It retains the common 5×112, high positive offset as its corporate siblings, so plan on upgrading this one in the near future. It has 17-inch wheels and 235/45R17 tires – plenty of room for growth. 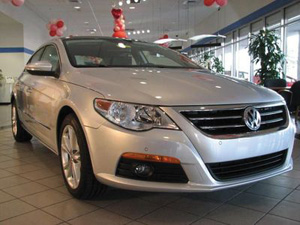 One notable truck in the lineup is the 2009 Dodge Ram, a complete redesign. The truck now has a coil spring rear suspension instead of leaf springs. I also noticed that the rear inner fenderwell does a nice job of cleaning up the contrasting image of the bed and frame that is apparent on other popular truck models.

But it also means a little less clearance behind the tires when plus-sizing to above 22 inches. Be mindful that there are high positive offset wheels built in a 5×5.5 bolt pattern that will not work on this truck. Every model but one has 275/60R20 tires and all have a definite medium offset.

Finishing the group is the sport coupe class, with a familiar name and a new kid looking to knock the veterans off the hill.

The new Nissan 370Z is on the way. With a 332 bhp 3.7L motor, look for the potential for a staggered tire and wheel package similar to the 350Z. 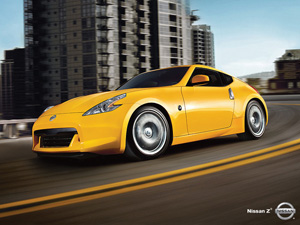 The Sport package will get 245/40R19 mounted on 19×9-inch (front) and 275/35R19 mounted on 19×10-inch (rear) 5-spoke Rays super-lightweight forged alloy wheels. Note that Nissan is sourcing a very expensive wheel for this application to keep the unsprung weight to a minimum. This is precisely what we discussed two months ago in regard to the future of the industry.

Next up, the newcomer. In recent years, Hyundai has quietly been sneaking up on the competition. Not anymore. The new Genesis sedan has enjoyed a great deal of press exposure thanks to its high level of sophistication and reasonable price tag. 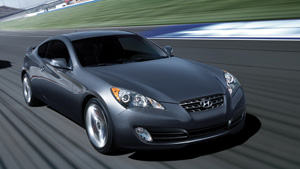 To add to the line, Hyundai is introducing a Genesis Coupe that boats 306 bhp and an aggressive look. Peek through the 19-inch Track version wheels and you will find a Brembo big brake kit lurking behind the spokes. Mate this to the six-speed manual throw stick and you have $30K worth of fun with change left to bolt on some performance options.

Be sure to catch us over the next couple of months, when we walk through a complete tire and wheel installation, adjust the alignment and learn how you can incorporate some of these techniques into your business.