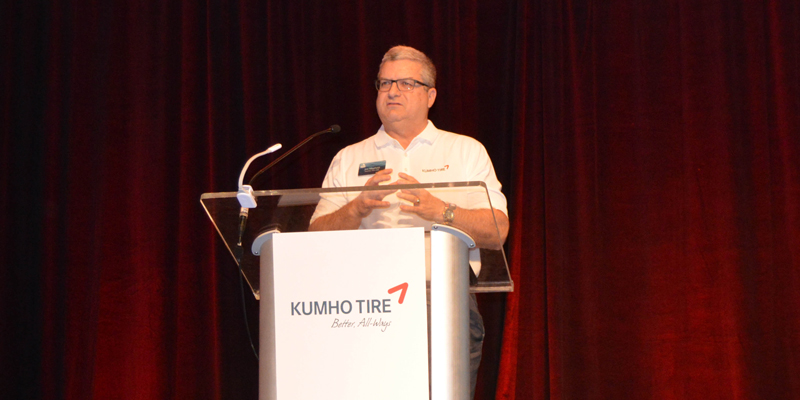 Kumho Tire USA presented its “Take Control” strategy to its top tire dealers, distributors and their guests during its Kumho business meeting Dec. 8 at the Ritz-Carlton Hotel in Grand Cayman.

Jim Mayfield, Kumho executive vice president of sales and marketing, provides an overview of the tire company’s progress in 2016 and details plans for future strategic growth.

Sometimes you have to slow down to speed up. After launching 11 new products in 18 short months, Kumho Tire USA’s 2017 strategy mirrors its new marketing message, “Take Control,” pulling back on new products and programs to instead focus on building a reputation of stability and consistency within the marketplace.

Kumho presented this plan to its top tire dealers, distributors and their guests during its Kumho business meeting Dec. 8 at the Ritz-Carlton Hotel in Grand Cayman. The corporate update began with opening remarks by Harry Choi, CEO of Kumho USA, followed by an atypical business update by Jim Mayfield, Kumho executive vice president of sales and marketing. 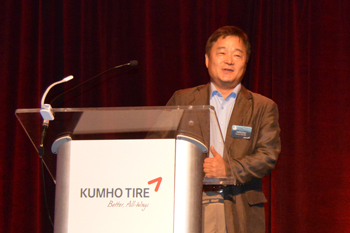 In a market thick with tire companies frequently rolling out new products and programs, Kumho is taking a different approach. The self-proclaimed “challenger brand” used its annual dealer meeting to announce a strategic pausing of all new product launches for the next 12 months as well as suspending any major changes to their core customer relations programs.

“We want you to catch your breath,” said Mayfield, addressing the crowd of North American dealers and distributors.

While Kumho is holding back on the release of new products after an aggressive launch calendar in 2015-16, Mayfield said they remain committed to the research and development of new products set to launch in 2018. Updates to come include its Ecsta all-season UHP product family and new mud terrain designs.

The goal of hitting the proverbial pause button, according to Kumho, is to promote an environment of increased stability to foster growth through the controlled management of its existing efforts across product, sales, marketing and dealer initiatives.

Their dealer incentive programs will remain the same, with improvements made to the company’s Premium Fuel Associate Dealer Program, including streamlining payouts and making it easier to get credit on anything sold with the Kumho name on the sidewall.

“Every product that says Kumho on the side – that you buy from us, Kumho USA – will start in building bracket for the Fuel deal. If it says Kumho, it builds the bracket,” explained Mayfield on the enhancements to the program. Another improvement includes the faster payment of checks at the end of each quarter with a goal of getting money into the hands of qualifying dealers within two weeks.

In addition to pausing new product launches and fine-tuning incentive programs, Kumho is revitalizing its commercial sales division with the recent hiring of industry veteran Gary Sass, and making better use of data to inform go-to-market strategies under the direction of Steve Ewing, the company’s pricing and market intelligence manager.

A key component of stability sought by the tire company includes the recently opened manufacturing and research facility in Macon, Ga. Mayfield referenced the production automation and quality to come from tires produced at the new facility, as well as its ability to reduce future fulfillment concerns. Once fully online, the plant will support the growth and demand in OE accounts, particularly with Hyundai, Kia and Fiat/Chrysler relationships, in addition to serving the replacement market and its dealers. 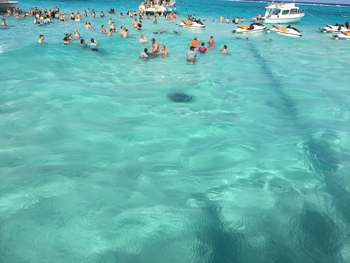 Trip activities included sailing aboard a large catamaran out to “Stingray City” where tire
dealers learned how to handle tame stingrays, visible as dark shadows above.

Mayfield reinforced the importance of Kumho dealers to the company’s long-term growth, referencing recent research from Tire Review’s 2016 Sourcebook on Kumho’s reputation for innovation and profit for its dealers (the tiremaker earned a 9.3 out of 10 for innovation and a 9.2 out of 10 for profitability). He also shared that the company’s overstock specials would not be as common as they have been in the recent past.

“Our inventory position is much more balanced than it was,” explained Mayfield. “You won’t see as many inventory overstock promotions as you saw before.”

He explained that the company intentionally built up surpluses in replacement tire inventory as a safeguard, in case production at the new plant in Macon did not come online as smoothly as it actually did. This resulted in overstock specials offered throughout 2016, which tapered off in Q4.

According to the presentation by Brian Gallagher, senior marketing manager for the tiremaker, new targeted programs, tools and videos will be available in early 2017 to drive more business to dealers and to better educate their teams on the many Kumho products recently released. The company is also in the process of updating their consumer-facing websites and sales collateral to have a consistent look and feel based on the new brand message of taking control, which Gallagher says performs well with younger consumers and those more interested in quality and value over brand name.

Kumho admittedly falls short when it comes to consumer awareness and brand recognition. Gallagher hopes to change that. In addition to the new product training and materials, the Kumho marketing team is building a marketing content library for use across social networks with sharable videos and information that support the Kumho brand story. This includes the crafted use of sports marketing to reach more potential customers and to increase brand recognition as well as targeted initiatives in key regions.

Other awareness-building strategies include partnerships with the National Basketball Association and being named the official tire of the Atlanta Hawks and Charlotte Hornets. Once a strong presence is established within the southern region, Kumho plans to grow the programs to other parts of the United States. The tiremaker is also doing more to engage fans online at NBA.com, with plans to use the NBA All-Star weekend in New Orleans in February and the NBA playoffs to amplify the tiremaker’s spring rebate promotions. In-store materials will be made available to Kumho dealers.

In addition to NBA sponsorships, Kumho is producing unique videos, “Player Style Files,” featuring athletes from the National Football League to maintain awareness during the NBA offseason as well as other content with an emphasis on digital and mobile.

While the overall Kumho meeting message was one of reassurance and stability, the focus remains on growth. 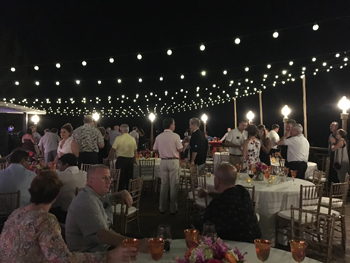 Kumho dealers and guests enjoyed cocktails at sunset followed by dinner and dancing at the Grand Old House restaurant in the George Town area of Grand Cayman.

“We have to grow,” Mayfield said. “In 2016, we had nice sales growth but we have to continue that in 2017. We want to rely on our new products, working with you to grow your business with us, and looking for new business as well. And we have to do it in a way that is manageable and not disruptive.”

When asked if he has any concerns regarding the controlling 42% stake in the company currently open for bids, Mayfield said he is highly confident in the future of the organization as well as its growth, regardless of ownership. He also shared that any sale will have minimal impact on Kumho dealers in North America.

“We supply 4 million tires to the OE market. We have good market share on a whole new replacement market product portfolio and we’re only going to be growing,” he shared. “There are so many things that we have today that make us attractive to an outside  company so I don’t think there’s anything for the dealers to worry about…I’m not worried. There is a place for the Kumho brand in the North American market.”

Kumho Asiana Group Chairman Park Sam-koo has right of first refusal to repurchase the Kumho Tire Co. stake, which allows him to match the highest bidder’s price and terms to reacquire Kumho. The final round of bidding is expected to take place in late January.

The Kumho business meeting wrapped up with remarks from NBA hall-of-fame legend Dominique Wilkins on the value of teamwork.

Focusing on Consistency and Growth