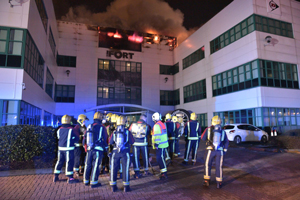 According to West Midlands Fire Service, the fire broke out in the evening at the Wingfoot Way site and spread through the building’s ventilation system.

About 100 firefighters were called to the scene around 7 p.m. and the blaze was not extinguished until around midnight.

The fire service reports the fire was not caused.