South Korea’s oldest tire manufacturer isn’t what you might assume. Originally established in 1942 as Heung-A Tire, the company now known as Nexen Tire Corp. is celebrating 70 years in business this year, and has ambitious growth plans for its future. 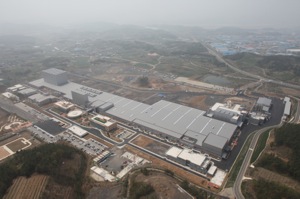 Nexen (which means "next century" in Korean) now has the capacity to produce some 30 million passenger and light truck/SUV tires from its established plants in Yangsan, South Korea, and Qingdao, China, and its recently opened facility in Chang­nyeong, South Korea.

That new plant, which a group of international tire journalists had the opportunity to visit in May, is the lynchpin in Nexen’s goal of reaching $2.5 billion in tire sales and becoming a top 10 global tiremaker by 2020.

To reach that mark, Nexen executive vice president of sales Byung-Woo Lee said the tiremaker plans to reach 60 million annual units by 2018 and 80 million tires by 2020. That, he acknowledged, will mean adding another tire plant.

The new Changnyeong plant, Nex­en said, currently employs 500 people and should be producing at an annualized rate of three million tires by the close of this year. Over the next six years, a series of planned expansions will boost capacity to 60,000 units a day, or 21 million a year, with about 2,000 employees.

Located about three hours southeast of Nexen’s headquarters in Seoul, ground was broken for the Chang­nyeong plant in June 2010, and the first tires came off the production line this past April. It might take a little while to drive there, but the new plant is located near convenient highway systems and the key port of Busan. 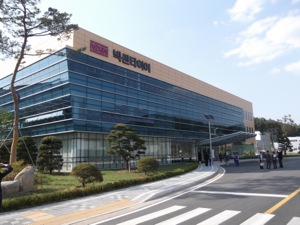 Included within the highly automated Changnyeong tire factory’s 4.65 million square feet of floor space are some of the latest, most technologically advanced tire production equipment from suppliers like Mitsubishi, Harburg Freudenberger, Kobelco, Nadada Engineering and VMI.

New technology also is employed to improve the work environment, including advanced lighting via the use of solar panels and natural light, and ventilation systems that remove rubber odors and heat from the factory. General exercise areas, health facilities and common areas for workers to relax in between shifts all seem to have a positive impact on this factory and its employees.

Nexen said it chose Changnyeong due to its lower labor costs and because the company believes it can better guarantee quality product at a home-grown factory. In addition, the South Korean government provides incentives to South Korean companies that maintain domestic facilities.

In addition to its production plants, Nexen maintains four research and development facilities throughout the world: its Core Technology Center in Yangsan, South Korea; technical centers in Richfield, Ohio, for North America OE and core property research, and in Eschborn, Germany, for European OE; and a testing and technical center in Qingdao for Chinese domestic replacement and OE tires.

Currently, Nexen provides OE support to Hyundai, Kia, Ssang Yong, Chevrolet, Deijing Hyundai and SAIC. In addition, the tiremaker recently announced a fitment with Fiat in 2013. Its business with Hyundai includes supplying the carmaker’s production efforts in the U.S.

Global Ambitions
Plans for future expansions of the Changnyeong factory already are in place to assist in accomplishing a corporate goal of becoming one of the top 10 tire manufacturers in the world by 2020. 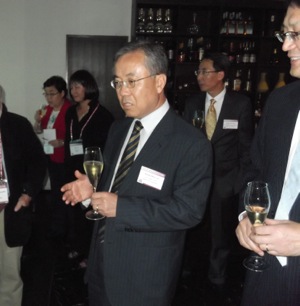 “We have poured our hearts and souls into making sure that the Changnyeong industrial complex is a world-class facility,” Lee said.

Supporting its international distribution, Nexen recently exhibited at the bi-annual Reifen 2012 in Essen, Germany, and will have booths at both the upcoming Moscow Inter­national Automobile Salon in August and the SEMA Show/Global Tire Expo in Las Vegas this November.

And its sports marketing efforts include sponsorship support of soccer team Eintrach Frankfurt in Germany’s Bund­esliga, and as a corporate sponsor of the recent the 2012 Chinese FA Super Cup.

In the U.S. and Canada, the company believes consumers compare Nexen favorably to other South Korean tire manufacturers, as well as brands like Cooper and Falken.

In North America – where annual sales are in the $350 million to $400 million range – Nexen aims to expand its business presence through developing market-driven products suitable for the region. It was only earlier this year that the company established Nexen Tire Inc. in Can­ada, headquartered in Markham, Ont.

Song is interested in improving Nexen’s brand awareness and value proposition for dealers in North America by moving into motorsports and working itself up through the ranks, gaining recognition on OE positions worldwide, and competing successfully in consumer magazine tire testing.

Over the last five years, Nexen has placed added emphasis on growth in the U.S. and Canada, and has found that signing quality customers has given them room to grow with a financially sound and strong dealer network.

When asked if Nexen has interest in building a factory in the Americas, company spokespeople could only offer that the tiremaker would consider building a plant outside of Asia based upon market conditions.

According to Song, for 2012 Nexen’s R&D team is developing its first run-flat tire, slated to be a replace­ment tire option at the start of next year. The tiremaker also plans to export this run-flat tire to Europe. In addition, Nexen is planning further tire introductions in 2012 that will cover five new passenger patterns and six new light truck/SUV radials.

Considering how the tiremaker has arranged its mid- and long-term goals based on the new Changnyeong factory, one can clearly see why Nexen has become a world-class tire manufacturer with ambitious goals.