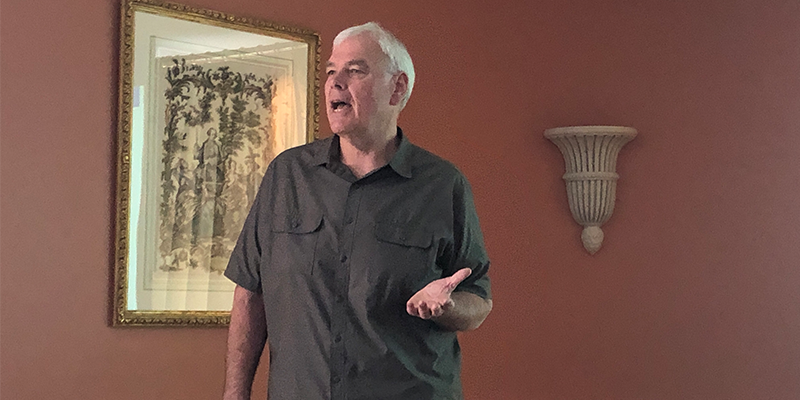 Falken Tire’s top tire dealers were treated to a week of luxury as they learned about the brand’s new products, growth and challenges for 2019.

Between excursions to Monaco, wine tastings and culinary tours in the French Riviera, Falken Tire’s top tire dealers were treated to a week of luxury as they learned about what the flagship brand of Sumitomo Rubber North America (SRNA) has in store for 2019.

Falken treated its top dealers and distributors to a week’s stay in the south of France at the Chateau St. Martin, nestled in the hills between Nice and Cannes. Day trips to the Antibes for an absinthe tasting and Nice for art and wine tours filled the days as industry veterans enjoyed each other’s company talking shop with Falken leadership.

During a business meeting on the trip, Falken Tire emphasized changes that would be coming from the company in 2019 as the industry continues to evolve. Rick Brennan, vice president of strategic planning for SRNA, highlighted the brand’s increase in OE fitments and new products and sizes coming this year as well as struggles Falken has had with fill rates and ramping up production at its plant near Buffalo, New York.

Last year, Sumitomo Rubber North America saw growth in unit volumes for replacement and OE tires as well as its motorcycle tires it manufactures for the Dunlop brand in North America. While its Ohtsu and TBR tire sales fell slightly in Q1 this year compared to last, its sales of the Wildpeak A/T AT3W, Ziex CT 60 A/S, Sincera SN 201A/S and Sincera SN250 A/S increased. The Falken brand also grabbed 2.8% of replacement tire market share, making gains for the third year straight in the passenger and light truck segments.

“[The AT3W] has been a real horse for us,” Brennan said about the tire’s growth. “It’s taken us from basically obscurity in light truck up to a real player.”

Focusing on making tires for CUVs, Falken Tires has also gained OE fitments on those vehicles. This year, the company announced its new Wildpeak A/T Trail would come OE on the 2020 Toyota RAV4 TRD Off-Road. It also enjoys OE fitments on the Nissan Rogue, Subaru Crosstrek, Jeep Renegade and more than 30 other vehicles. Brennan said in 2018, the company gained 1.6% of the OE market share with more to come in 2019 after it had no OE fitments just three years ago.

Despite growth in PLT sales and the OE market, Falken Tires has faced challenges fulfilling orders to keep up with demand. Its plant in Tonawanda, New York, just outside of Buffalo, underwent a “total change” in 2016, Brennan said, after SRNA gained 100% ownership of the facility upon dissolving its joint venture with the Goodyear Tire & Rubber Co. The facility went from manufacturing solely Dunlop motorcycle tires to producing 137 different SKUs for the passenger, light truck, TBR and motorcycle segments.

“That was going into a factory that wasn’t used to [so many] different SKUs,” Brennan explained.  “Keep in mind, it’s the only factory in the U.S. that makes passenger, light truck, TBR and motorcycle [tires] all under the same roof. So, they all use different materials. They’ve been focused on trying to keep track of materials, then moving on to how we get them to flow through the system, and at the same time, we put in a boatload of new equipment. So, for the people that have worked there – a lot of them for around 30 years – this complexity wasn’t there. So it’s not just changing the equipment and changing the flow of material, it’s changing mindsets. And we found that’s probably the biggest thing we have to overcome.”

The slower production in New York has led to Falken’s Wildpeak A/T AT3W to be put on backorder and will most likely remain backlogged until Q3 this year, Brennan. Dealers may also see a limited capacity of the Ziex CT60 in 19- and 20-in. rim diameters.

“Buffalo has to get fixed,” said SRNA President Richard Smallwood. “We’ve forced them to do way too many things way too fast … they weren’t mentally or physically prepared for that.”

Production challenges such as uniformity and appearance in its TBR tires have also forced SRNA’s New York facility to reconsider the tools and equipment it’s been using. Brennan said the company is addressing irregular wear and repair issues on the Falken BI830 long haul service tire as well as backorders on the BI850 in the 19.5-in. drive tire sizes. To fulfill some of those orders, SRNA is supplementing its BI-877, which has a 19.5-in. fitment, out of Japan to meet demand.

However, Brennan said SRNA will take advantage of its global footprint to maximize production capacity at its other manufacturing plants to decrease backorders while its New York plant works to reach capacity.

“We have big expectations because it’s our factory in the states,” said Brennan, who said its goal is to produce more than six million units at the New York factory by 2022. “We have to get it up and then we have to get it to a certain level and make sure that we don’t have glitches like the AT3W as much as we the had in the last year.”

New sizes and products, specifically focused on the crossover segment, will come from the Falken brand in 2019 and beyond. Those include:

In its all-season offering, Falken will transition its sizes to be more segment-specific. For example, its Ziex CT60, what the company has designated its crossover specific line, will pick up 10 crossover sizes from the Wildpeak H/T HT01 that won’t be offered with the HT02.

The Ziex ST 205 will also help fill in some sizes as the CT60 expands this year. The Wildpeak A/T Trail will fill in with all-weather capability for those crossover sizes.

Brennan also said the Ziex ZE950 line will also be discontinued and replaced with the Ziex ZE960, targeted specifically for passenger cars. The 105 sizes of the 950 will be spread out between the ZE960 and CT60.

“That means that as we transition through 2019 into the latter part of this year, we’ll have dedicated sizes for tire lines,” Brennan said. “We’re kind of a pioneer in this [CUV] segment and we’re going to treat us as a pioneer, so we’re going to have to do things that really make it known to people that are actually adventure-type consumers.”

To advertise its new products and strategic direction, Falken will utilize traditional channels such as trade magazine advertising and press releases as well as have a strong presence on Internet chat forums and social media.

For the launch of its A/T Trail, Falken will release a new point-of-sale suite and Falken TV spots as well as work with specialty retailers, such as LP Aventure, to target those adventure seekers. The company will also use a mix of advertising at events and trade shows as well as online reviews and enhancements to its digital product page to get the word out.

“It’s going to be more of a grassroots-type effort, but it’s more cost effective for us,” said Brennan about the promotion plan for the AT Trail. “They’re more focused in the places they go, and we’ll go where they go and try and talk to them.”

Into 2019, the company will also focus on growing its Falken Academy and getting more Falken TV subscriptions into the market. Effective April 1, Falken also rolled out MAP pricing, which includes revised requirements and clarified rebates.