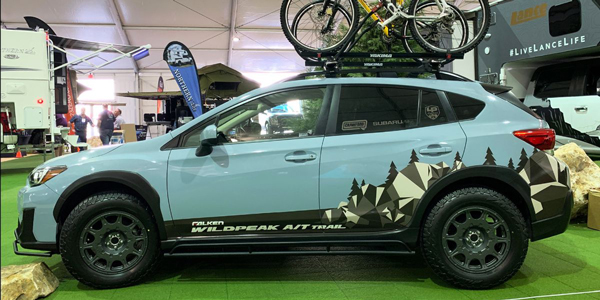 Built by Crawford Engineering, the vehicle features a specially-mounted LP Aventure front trail guard to prevent damage to the nose of the vehicle, as well as rock sliders alongside the body to avoid scratches and gouges from rock climbing. Baja Design lighting, Method Race wheels along with a distinctive wrap design and Yakima bike racks make up the overall look of the crossover.

“We spoke with thousands of crossover owners across the United States and Canada, and found there is well-defined subset of motorists who use their vehicles for both daily driving and outdoor adventuring, just like many 4×4 SUV and pickup owners do,” stated Drew Howlett, Falken Tires product manager of light truck/SUV tires. “However, while this consumer segment is particularly drawn to the versatility of a vehicle having increased ground clearance and all-wheel-drive capability, they don’t want to compromise on fuel efficiency, or, in some cases, deal with the larger size of a traditional SUV or pickup.

“In addition to the Subaru Crosstrek, our A/T TRAIL tire is a popular fitment for the Subaru Outback, as well as Ford Escape, Jeep Cherokee, Honda CR-V, and for 2020, becomes the original equipment tire for the Toyota RAV4 TRD Off-Road,” Howlett said.