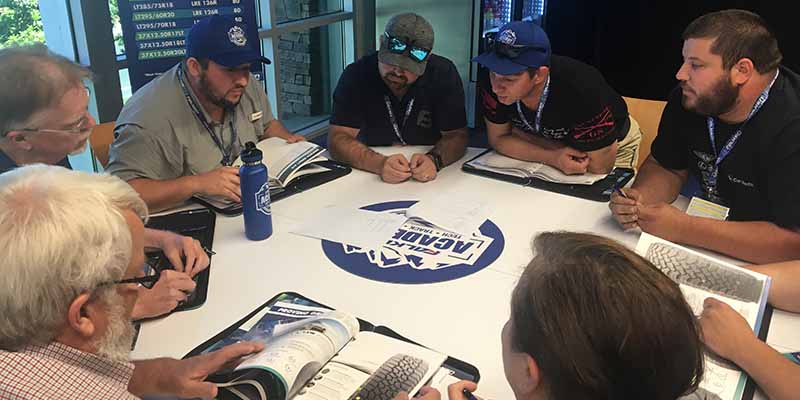 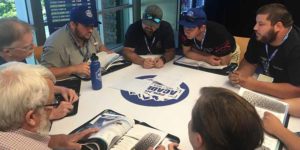 Participants in Falken Academy take a quiz based off of the information they received from the day.

In sunny Rancho Cucamonga, California, a group of around 30 tire techs, service advisors, dealers and distributors gathered to go back to school.

But not just any school. One where they would learn about Falken Tire as a whole at Sumitomo Rubber North America (SRNA) headquarters, the tire brand’s parent company.

In a two-day event, the Falken team opened its doors for its Falken Academy, a quarterly education program launched at the beginning of this year. The first day, participants went to SRNA for an interactive classroom session to learn about the company’s history, its marketing efforts and the evolution of its product lines.

“We wanted to get dealers here,” said Bakari Howard, Falken’s product training supervisor. “The front line is an associate dealer or distributor. There’s things that they’re seeing that we’re not seeing … How do you view our product? How is our (associate dealer) program? How can we better help you sell our product? I think to have them here for a day and give our store owners tools to help them make more money off our product is really beneficial both ways.”

The classroom sessions, led by Howard, kicked off with an opening Q&A from SRNA’s President and CEO Richard Smallwood. The 31-year tire industry veteran addressed dealers questions about Falken’s product – including its recent price increase – and gave an overview of SRNA’s product portfolio.

He encouraged dealers to have a two-way conversation about Falken’s product with staff in order for the company to better serve them.

While the program offered a comprehensive look at Sumitomo Rubber North America and the Falken brand, we pulled out a few important nuggets from each of the day’s sessions for our readers.

The founding of the Sumitomo Rubber Industries dates back to the early 1600s when the Sumitomo Group was founded. But it wasn’t until 1909 when Sumitomo Rubber Industries (SRI), the parent company of Falken Tire, was born when Sumitomo Corp. made a significant investment in the Dunlop brand in Japan. Eventually, Sumitomo gained control of Dunlop Japan and gave the separate company its name today, Sumitomo Rubber Industries. In 1983, the Falken Tire brand was created in Japan. Eight years later, the company set up an American subsidiary. Its known today as Sumitomo Rubber North America but it came to the U.S. under the Falken Tire Corp. The company changed its name to reflect its Sumitomo roots just a little over two years ago, around the time Goodyear Tire & Rubber Co. ended its joint venture with SRI to produce Dunlop Tires. Now, SRI controls the production of Dunlop motorcycle tires and Dunlop OE tires on Japanese vehicles. Goodyear controls Dunlop’s replacement tire market and all other OE business outside of Japan.

Be careful not to confuse SRI with Sumitomo Corp., the parent company of TBC Corp., the retail tire giant that owns NTB, Tire Kingdom and Merchant’s Tire.

Howard said Falken has seen its brand recognition in the North American market grow in the last five years, thanks to an increasing number of OE fitments, its sponsorship of Major League Baseball and its activity on multiple racing circuits.

This year, Falken also launched Falken Digital TV, a video service its dealers can play throughout the day in their waiting rooms. The content, which is fresh daily, features automotive news, product overviews, and both on and off-road racing content from Falken teams. To stream the content, dealers must plug a firestick device into their TV’s HDMI port, connect to their store’s Wi-Fi and follow the setup instructions.

Participants received an in-depth education into Falken’s 15 types of tires under six tire lines. Howard interspersed questions about certain tire segments in which Falken could be compared to its competitors. The session questions not only shedded light on dealer buying and selling habits but also where Falken’s strengths lied in certain segments. A few highlights included:

In regard to Falken’s recent price increase, Smallwood said the money gained from the increases is going back into enhancing its FANATIC dealer program.