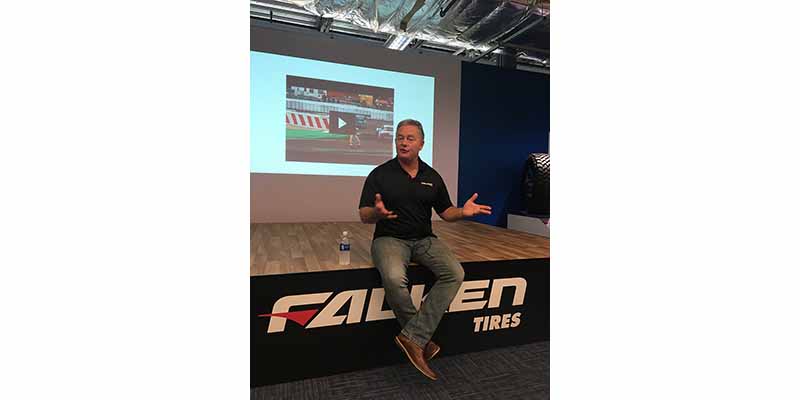 Smallwood shares his view on Falken’s recent price increases, the growth of the light truck segment and the brand’s relationship with ATD. 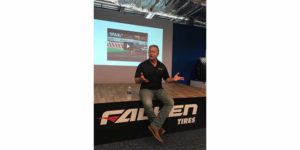 When you walk through the doors of Sumitomo Rubber North America, Richard Smallwood, the company’s president and CEO, wants you to see that “we’re a passion company,” he said.

That was the message the 31-year tire veteran conveyed to tire dealers when he had an open Q&A with them during Falken Academy, an educational event for dealers of Sumitomo Rubber North America’s flagship brand.

Smallwood, who endured a motorcycle accident late last year, is still recovering but met dealers with the same passion he exudes into this company. Tire Review sat down with him for an exclusive interview to talk about Falken’s position in the market and distribution drama in the tire industry.

Tire Review: You spoke with dealers about Falken’s price increase. What was the reason behind it?

Richard Smallwood: “Our increase was not based on raw materials. Ours was trying to reposition the brand where we need to position it and it provides us funds that we can use to better promote the brand and better support out lines. We take those increases and use those to better support the associate dealer programs and do more just promotional support for the brand. There’s no net gain for us because all the increase was right back at the market. But we needed to provide more support to continue. It came down to… When brands are positioned a certain place in the market, you only have so many dollars to work with. We wanted to position the brand up a little bit higher to where we felt those specific products should be positioned at, whether its the A/T3W or the SN250, we raised the prices to position them where we really felt they should be positioned at but it also provides us more support to promote the brand.”

TR: Other tire manufacturers have announced price increases upon the announcement of President Donald Trump’s administration imposing steel and aluminum tariffs. But that’s not the case for Falken? Has that affected your business?

RS: “That’s not at all the case. When you look at the total package of goods you always have this up and down. Every single Monday, we get reports about here’s where oil is at, here’s where butadine’s at, here’s where carbon black and steel…the problem is on a cumulative basis, everything is up. And you can see the impact. Look at the tire company financials. It hasn’t been very pretty. Everybody is pretty much saying we’re getting killed on raw materials. In a normal market, the manufacturer would take a price increase to cover that. But the manufacturers aren’t. I think that’s because people are wondering what’s happening with the market. If you raise your price, you may be afraid that your competitors won’t. But I think at some point, the manufacturer will have to take an increase just to be able to cover the cost of raw materials because the shareholders at some point are going to become unhappy. The increases are definitely slower now than what you would normally see. But it’s really caused more by fear of losing share in the market but it still comes down to if your operating profit isn’t very good, at some point you’re going to have to make a decision.”

TR: You mentioned to dealers the growth of the Wildpeak A/T3W and how its growth has exploded.

RS: “It’s been crazy. We’ve been struggling to keep pace. It’s almost impossible to describe the amount of success we’ve had. We’ve had categories where we’ve been very dominant like the sport light truck. Ultra high performance, we used to have huge share. We still are number four in ultra high performance but light truck was never saying we were really strong, but I knew in the AT and MT category, we’d do well because those are passion brands or passion products. That’s where we do well. We don’t do good in commodity. We do well in areas where people care and are connected to the vehicle, that’s where we sell. For the AT guys, it looks really cool and it runs amazing…. It’s to the point where we have manufacturers who want to use it just as it is, just because of the appeal of the tire. They can see the buzz in the marketplace and they’ve tested it, and they’re saying this is something we’d like to use. For us, this tire has been a game changer.

“Now, we’re launching a new H/T 02 probably around the end of this year but we’re going for the same look and feel: a rugged, beefy look, great technical performance. The same kind of feeling as the A/T3W.”

TR: I wanted to talk with you about distribution. In your talk with dealers, you mentioned the Goodyear-Bridgestone deal, but in terms of Falken and your relationship with ATD, are there any changes coming?

RS: “The market is definitely shifting and it looks to us that the Tier 1 brands are trying to gain greater control in the distribution of their profit. That’s what we see…. Look at other major markets in the world. You’ll find that manufacturers have much more control… over everything on how the brands are sold. In Europe, the manufacturer has much more control on how the product is sold. In the U.S. market, the manufacturer does not have as much control and that’s something that we could see for years that, at some point, they are going to want to gain greater control.

“It’s how can I make more money off of selling my product and sell more tires. If you’re Tier 1, the Tier 1 has lost (market) share. Its because a distributor is going to sell what they can make the most money on. They don’t make more money on a Tier 1 brand but they have to sell the Tier 1 brand because they do the advertising, promotion and all of that. They make more money selling a Tier 2 brand or Tier 3 brand. So you got the big three (Goodyear, Bridgestone, Michelin), they lose share as a result of that. So how do you get that back? How do you get that sale to the retailer? That’s exactly what they’re doing right now. They’re going to try to block out the sale to the retailer.”

TR: How is that move – or does it – affect Falken and its relationship with distributors?

RS: “What happens is the Tier 2 becomes a little bit more important because the dealer, well, specifically the distributor, will be competing directly with their supplier. If Bridgestone, Michelin and Goodyear are going to be doing wholesale, who are they selling to? They’re not selling only to their company-owned stores, they’re selling to every dealer who wants to buy their product. Isn’t that the same person the regional wholesaler is selling to?

“The reality is the distributor has the choice of what brand they sell. And they’re going to sell the products they feel the safest and most profitable selling. If they feel they have to compete with the Tier 1 manufacturers, they’re probably going to have to try to find another brand that they can sell and focus on. That brings opportunities for Tier 2 brands like Falken. These things actually create opportunity short term. In the long term, if they don’t survive, then it’s a different story. I don’t believe that to be the case. Will they succeed or will they not? That is the big question. For us, this has created immediate opportunities for us as the dealer is looking to a brand they can rely on.”

TR: What about your relationship with ATD? Have they approached you since Goodyear pulled out?

RS: “Our business with ATD has been growing very well over the last year and a half. Our brand has experienced tremendous growth over the last year and a half on the regional level. ATD is one of those places where we’ve had amazing growth. We have been growing with them but we’ve reached out to them about how we can support them as well. They’re a good partner with us and, just like any customer we have, we want to try and support them. It’s good for the industry to help keep them alive. It’s good for the market to keep them alive.”