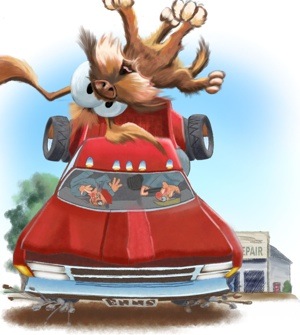 Are you sure about this, Slim?” Digger Dan had to holler to be heard above the noise of his backhoe. He was preparing to dig a new drainage ditch behind my shop.

“I think you’re fine,” I shouted back. “According to my calculations, that natural gas line should be 10 feet away. You’ve got plenty of room!”

“According to your calculations?!” Dan turned off the machine and pulled a stubby cigar out of his mouth. Pointing it in my direction, he said, “Do you mean to tell me that you haven’t had the gas company down here to locate the line for you?” 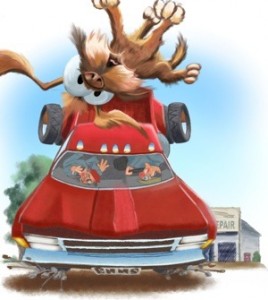 “Well nothing.” He started up his backhoe and pulled in the outriggers. “I ain’t blowing myself up just because somebody didn’t do their due diligence.” He spun his seat around and lifted the bucket off the ground. “I don’t want guesses; I want signed documents!”

I groaned as the yellow machine bounced away down the road.

“So Dan didn’t believe ya, huh?” Tooner took a sip of his coffee and surveyed the scene. “I’ve been telling you, Slim, that gas line is closer to yer ditch than ya think.” He chuckled. “Dan’s right, you gotta do your due diligence.”

“What’s ‘do diligence’?” asked Beanie, coming out the back door with a can of Coke in his hand.

“Allow me to educate you.” It was Basil’s turn to join the peanut gallery. He pulled a pocket dictionary out of his back pocket (Why he has one, I do not know). “It’s due diligence, not do diligence. Anyway, it’s the process of investigation and the verification of material facts.”

I threw up my hands in defeat. “All right, already. I get the picture.”

“Hardy har har,” I growled. “In case you’ve forgotten, I built this shop and I know this back lot like the back of my hand. I’m telling you that gas line is exactly where I said it was.”

At that moment a customer rang the buzzer at the front of the store, putting an end to the discussion. A few minutes later, Quigley returned with a set of keys. “We’ve got a 1993 GMC one-ton dually here for a set of tires, but it has a hydro-boost problem, too.” He tossed the keys to Basil. “Every time the customer hits the brakes, it throws him into the windshield. Based on the threadbare rubber he has now, new tires will probably make that worse.”

Basil brushed donut crumbs from his goatee. “Any recent history?”

Quig checked his notes. “Well, the front and rear brakes are only four months old, and the power steering hose that goes from the pump to the hydro-boost unit was just replaced.”

Basil snapped his fingers. “Problem solved, boys. If the fitting on the back of the power steering pump comes off when you’re changing the hose, the pressure relief spring can pop out. If you don’t put it back in correctly, it can cause oversensitive brakes.”

“And it’ll make the steering a little dancy, too,” added Tooner. “A simple test drive should confirm our diagnosis.” The two of them high-fived each other before jumping into the truck for a run around the block. But they weren’t looking quite so cocky when they pulled into the shop 10 minutes later.

“So how’s the steering?” asked Beanie.

“Fine,” muttered Tooner. “But the brakes ain’t. Go fire up that computer of yours and find the diagnostic charts for these here hydro-boost units.”

Over the next few hours, the crew tried every diagnostic trick they could think of, including removing the power steering belt, braking on gravel to check skid patterns and pinching off brake lines.

Finally, lunch-time rolled around and the GMC one-ton was still undiagnosed. Four dejected egos dragged their owners into the staff room.

I leisurely flipped through the latest Tire Review as they slouched into their chairs. “Okay, maybe I’m missing something here,” I said offhandedly. “But don’t most grabby brakes wind up being a lining problem?”

“But the pads and linings are only four months old,” protested Beanie. “The brakes were working fine until just recently.”

I sprinkled some salt on my roast beef sandwich. “But did you check them anyway, just to be sure?”

“Pulled the fronts myself,” said Tooner. “Lots of pad and rotor. Everything looks perfect.”

I raised an eyebrow. “Okay, that covers the front end. And what about the rear?”

The room got very quiet. “Well, they’re practically new,” mumbled Basil, “and those dual wheels are awfully big and ungainly.”

“Downright beefy, if you ask me,” agreed Tooner. “A feller could hurt himself just lifting one off.”

I munched on a celery stick. “Seems to me I heard a lot about due diligence earlier this morning. How did you put it, Basil? Something about the verification of material facts…? Besides, don’t you need to pull them for new tires, or did we forget something else?”

Tooner put down his sandwich. “Darn! Ya gone and ruined my appetite…” He stuffed his lunch back into the bag and headed for the shop. The others followed him sheepishly. It was time to remove the rear tires and brake drums – and change the tires.

A few minutes later I went out and found them staring at a bad wheel cylinder on the left side and a leaking axle seal on the right. The crew got busy, and once the leaks were fixed, the shoes replaced and the new rubber on, the GMC stopped like a dream.

“I hate it when he’s right,” Tooner muttered to Basil later as he cleaned up his wrenches. “There’ll be no livin’ with him now.” He pointed to the signs I’d stuck up on their toolboxes. “And them things don’t help neither!” The signs read, I’m Doin’ the Due Dil!

The next day Digger Dan was back on site. “Well, it looks like you were right, Slim; there sure ain’t no gas line down there.”

“Yep,” I replied. “The gas company confirmed it. They said it’s right where I thought it was.”

Dan took off his sunglasses and dried them with his big red-and-white-checkered handkerchief. “Still, it would’ve been nice to call the city and find out where the water lines were.”

We both stared solemnly as bubbling water filled the ditch underneath the rear bucket of his backhoe.

Doing Your Due Diligence