his. Poulin described GM closing his franchise as, "A horrible thing to go through, yet it strengthened me a lot." 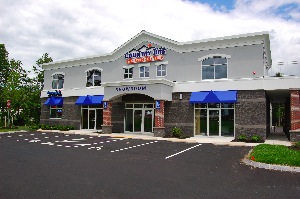 He explains his resolve this way: “I’m a young guy, I’m 46 years old. People told me you’re going to come back. Their support strengthened me. I chose to be the victor and not the victim.”

Now, a year after he lost his appeal to keep his car dealership, Poulin has opened Country Tire and Service Center less than a mile from his former business’ location in Rochester, N.H.

Moving On
Why tires and not another car dealership? “I looked at the tire business because there are some similarities between the car business and the tire business,” says Poulin. “And I wanted to pick a business I knew something about,” he adds, “because throughout the GM appeal process we had a huge fan base of more than 3,000 rally behind us, signing petitions saying not to close us down. It proved we had a good reputation. I didn’t want to abandon a business and clientele with such a strong following.”

With his Chevy dealership closing and the local Dodge dealer also closing, customers were going to need service, Poulin reasoned. “They can get the whole gamut at a tire store – from oil changes to mufflers, brakes, shocks, basic maintenance and tires, obviously.”

Also, Poulin found the increasing demands and limitations placed upon him as a car dealer burdensome. “I wanted to pick something I could brand myself and not worry about being under the umbrella of a franchise.”

Starting With a Clean Slate
Poulin relished the opportunity to start from scratch, to incorporate ideas he couldn’t express at his car dealership and design his building around the customer experience.

“I had spent my whole career in the auto dealership. I talked to customers and got a feeling for what they wanted. Customers want you to care about them,” he says. “There are different ways to do that, and you need to build value in your experience.” 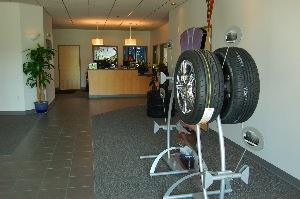 Poulin recounts his thought processes: “If I were to design a dealership waiting area, what would I want customers to see and how would they want to be treated? What impresses them? What don’t they like about other businesses? How can I combine all these things with what I am trying to accomplish?”

He also consulted his brother-in-law, who retired from Tires Plus, and a neighbor of his father’s in Florida who owns two tire stores. “I talked to them about the tire business and their experiences, and I combined their ideas with what I knew about the car business. I took a clean slate and said, ‘This is how I want to do it.’”

His solution is radically different from most other tire dealerships. He wanted to provide certain amenities for his customers, but the key for Poulin is not to try to do it all himself. Instead, he’s brought in specialists. “I went out and got several tenants that I felt would lend themselves to the business I was operating. I wanted to have three businesses that created synergy for one another and traffic for each other,” he explains. “You wouldn’t want me to make a cup of coffee for you,” Poulin laughs, and he didn’t want to employ people for the in-store café he wanted, so he asked Aroma Joe’s, an up-and-coming company in the area, to join him.

“They thought it was a great idea. Their strength is drive-ups and this place is their 11th shop, in a location they wanted,” says Poulin. But there was a sticking point to be resolved. “I wanted a coffee shop, a place for customers to sit that didn’t seem like a tire dealership.” Aroma Joe’s didn’t really want the shop. Poulin asked if they were willing to have a customer service window. They agreed. “My waiting room looks like a coffee shop, like it is their space, but it is only open when I’m open. They still have the drive-up, their strength, and it drives customers over to our place,” Poulin notes.

His second tenant is Enterprise Rent-a-Car, which had its own reasons for co-locating with Country Tire, primarily its proximity to the remaining car dealers in the area. Poulin wanted Enterprise as a tenant not only for ready car rentals for customers with overnight repairs, but also for the reason he will be servicing the rental vehicles. “Now I’m giving away all of my sec­rets,” Poulin jokes.

A Non-Commercial Look
Country Tire’s location is less than a mile from Poulin’s former car lot and near the interstate, which is being renovated and widened. Some 25,000 vehicles a day drive by the site, Poulin notes. The two-story building itself doesn’t resemble a typical tire store. 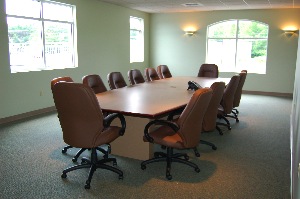 The design is purposely non-commercial in appearance, although it includes a drive-up and space for the planned tenants with adequate front­age to drive traffic to them. The ground floor occupies about 11,000 square feet, which holds the tire shop’s eight service bays plus a wash bay. Poulin’s office, two other rooms for lease and a conference room occupy 2,900 square feet on the second floor.

“The upstairs happened because of what I wanted to do for the community,” says Poulin. “I wanted a conference room that I could make available to non-profits to use, as well as space for my own training. I’ve been on numerous community boards in town and know that some of those boards have trouble finding a place to meet.”

The main floor showroom is simple and uncluttered, without a lot of tire displays. The goal is not to inundate customers with too much stuff, ac­cording to Poulin, but rather have a space to interact with customers. The exterior canopy that allows customers to drive in and enter under cover is modeled on a motel entrance.

Some of the service equipment came from his closed auto dealership, but the shop also features up-to-date balancing and other tire equipment. “We burn waste oil to heat the shop in the winter,” Poulin notes. “It’s a green practice that pleases some customers, and we don’t charge for disposal on an oil change, and customers also like that.”

On Being a New Tire Dealer
The key to success is to distinguish yourself from the competition, Poulin believes. “You need to offer an array of services and have the courage to be different,” he says. “We’re creating a different atmosphere here so that people will talk about us, and it won’t take a long time for that to happen,” he says, confidently.

“My charge for an oil change may be higher than a quick-change oil shop, but it includes an Aroma Joe’s coffee and a car wash.” The sponge-down might be performed by any of the shop’s three technicians, the store manager or Ron himself. “There are no prima donnas here,” he boasts.

“Without question, it’s a very difficult time to start a business, but there are opportunities out there if you look hard enough at them,” Poulin says. His community of about 32,000 is 20 minutes from the ocean and an hour away from Boston. “The local economy has taken its whacks, but people still have cars, they still need tires, and they need service – quick service – when they want it.”

Poulin is back on his feet and optimistic. “I had this idea as a back-up plan to my car dealership closing, but now, more and more, I’m getting excited, looking forward, and I know it will work.”

Downsized Car Dealer Reinvents Himself With a Tire Dealership