Del-Nat Tire Corp. celebrated 25 years in business during its annual meeting this month in Clearwater, Fla. 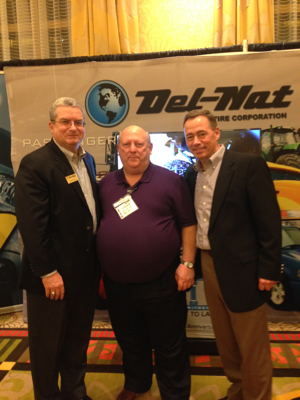 Del-Nat stockholders, suppliers and employees marked the occasion during a special anniversary dinner that included guest of honor Bob Gardner, the founding president of Del-Nat. The company was established in 1989 when Texas-based Delta Tire Corp. and Ohio-based National Tire Corp. – both private label tire brands – merged to form the co-op and relocated to its present location in Memphis, Tenn.

Since the merger, Del-Nat has continued to grow its network of tire dealers. The company now services more than 80 independent wholesale and retail operations throughout the U.S., Canada, Mexico and Japan with annual sales of more than $200 million.

Del-Nat has a network of domestic and international manufacturers producing the Delta, National, Sentinel and Akuret private brand names. The company has numerous other suppliers who provide tire accessories and ancillary programs.

“Many of our suppliers have longstanding relationships with the company, going all the way back to 1989,” said Jim Mayfield, current president of Del-Nat Tire Corp.