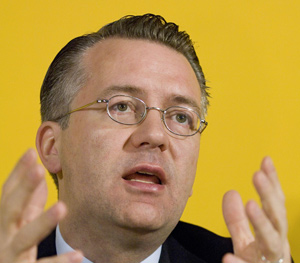 Dr. Alan Hippe took over as head of Continental Tire North America (CTNA) after Martien de Louw abruptly left the company last May. Hippe had been a member of Continental AG’s executive board since 2002.

Prior to accepting his role with Continental, Hippe had served as senior vice president in the group controlling and IT systems divisions of Aveco Holding AG, a holding company of real estate project developer Wissar Group. Later, he assumed the post of senior vice president in the controlling, finance and accounting groups of the airport management company Fraport AG.

Being head of CTNA comes with daunting challenges, not the least of which is pressure to meet ambitious profit and cost-cutting goals set by the Continental AG executive board. Over the past three years, CTNA has cut back or completely shut down production at all of its major North American tire plants – with the exception of the facility in Mt. Vernon, Ill.

In Charlotte, N.C., production was cut last summer by about 30%, but the facility still faces additional cutbacks and lay offs that, the tiremaker said, would come in two phases, occurring in March and June. CTNA officials told USW-represented workers that they could reduce or avoid layoffs if the two parties can reach an agreement to cut production costs by $32 million. At press time, no such agreement had been reached.

Though not severely impacted, the Mt. Vernon plant has not escaped unscathed. In January, workers at Mt. Vernon were asked to accept a 10% wage decrease, a 50% increase in insurance costs, vacation cuts and a pension freeze in exchange for a $60 million to $70 million capital investment at the 32-year-old plant. CTNA said it would begin the cutbacks on Mar. 1.

In this exclusive interview, Hippe discusses CTNA’s restructuring and production plans and outlines a few strategies that he believes will help CTNA meet its profit goals for 2006 and beyond. Andreas Gerstenberger, vice president of sales and marketing at CTNA, also contributed.

What are your current plans for the Charlotte plant?

“It would be speculation to say whether or not the plant will close, but the point is that we are negotiating with the union in good faith, and I am still hopeful that we get to an agreement.”

What is the current status of CTNA’s demand for a 35% wage and benefit reduction at the Charlotte plant?

“This is our requirement to make this plant cost competitive, and it’s not a number that we have taken by chance. It is something we evaluated carefully, and we looked at our European landscape.

“Nobody expects Charlotte to be the lowest cost manufacturer worldwide. What we expect, though, is a reasonable cost level. So we made an evaluation by looking at the European average. Plants like Aachen (Germany), Sarreguemines (France) and Clairoix (France) are operating on this average level or quite comparable to that. My question is, why is Charlotte not able to get there? That’s the point we are emphasizing. We are sticking with our demand. It is still under negotiation.”

With the reduced capacity that will result from the cutbacks at the Mayfield and Charlotte plants, is there any concern that CTNA will not be able to fulfill dealer demand?

“No, not at all. In Mayfield, we introduced an indefinite suspension of tire operations, but mixing is still open. We have, so far, no supply issues. We had some challenges from the relocation of production from Mayfield but we resolved this. So I think our availability, our inventories, are quite good.”

Gerstenberger: “That doesn’t mean we don’t want to improve our fill rates. Our fill rates, for certain lines, are around 80%. That’s good, but not good enough to be a leader. We will use our global sourcing capacities and the new plant in Brazil, which will open this year, to supply the U.S. replacement market.”

Have workers at the Mt. Vernon, Ill., tire plant accepted the wage and benefit cuts that were requested as a condition of CTNA’s capital improvement project?

“We are working on acceptance. We are communicating with every worker individually. On Jan. 12, I was in Mt. Vernon, and I made five presentations, trying to make people understand the situation with CTNA.

“There’s no question 2006 is a decisive year. I hope that we have outlined the situation of the industry. When you look at GM and Ford, they are our major customers. And, the GM Oklahoma plant is a plant we deliver directly into from the Mt. Vernon plant. I think globalization has come to Mt. Vernon. We explained that to the workers, and what we are doing at the moment is communicating intensively to make them understand the situation. We have to get competitive on a cost-level basis. And, it’s important to note that the planned investment would be the single-largest investment ever made in a CTNA plant in the nation.”

What will happen to North American production once the new plants in Brazil and China come on stream?

“We are committed to production in the U.S. It is a struggle, from a cost point of view. The Brazil plant is coming on stream, and East Asia is also an alternative. We have had a lot of discussions about the China scene.

“We made an evaluation, and we are planning to go to China with production. But, it will be hard to be cost competitive while bringing tires from China to the U.S. because of the transportation costs. So, our major focus is the NAFTA region. We are already in Mexico and Brazil. And, I talked about Mt. Vernon. We are really hopeful that Mt. Vernon will have a major stake in our production capacity.

“Mt. Vernon is an important asset to the company. We plan on Mt. Vernon being an integral part of our production landscape in NAFTA.”

What can we expect to see from Continental in the coming years?

“The U.S., Canada and Mexico are still the largest tire markets in the world. More than 30% of the tires sold worldwide are sold in the U.S. When you add the OE business, it’s even more than that.

“Continental, today, is well positioned in the OE business. We have more than 20% of the domestic OE manufacturing market with our Continental and General brands. On top of that, add the imports produced in Europe that are also coming with Continental tires into the U.S., Canada and Mexico.

“We will also focus on our General brand in the near future. Last year, we launched a variety of new products, not only for Continental, but for General. We launched the new General Exclaim UHP tire, General Grabber UHP tire and the General Grabber high performance tire. We also launched the ContiProContact and ContiCrossContact UHP tires.

“There’s more to come on the General side. There will be another launch for that brand announced around SEMA. We are planning to launch another light truck tire line for General in 2007 or 2008. A General winter tire is also coming next year to complete our portfolio. All of that will emphasize our focus on the revitalization of the General brand.”