Despite Struggles, Ag Market Sees Some Hope Ahead

Just how far is down?

Well, if you’re talking about the North American agricultural economy, down is a long, long way. But as long as farmers can still see the light of the morning sun, there is still hope.

When Tire Review last looked at the agricultural tire market (August 2001) the overall farm market was in its third straight year of negative growth, but experts still saw hope on the horizon.

One year later, their optimistic predictions failed to emerge, as farmers suffered through the worst drought since 1988, watched as an even greater number of small farms became residential areas, sat helpless as commodity crop prices dropped even further, and waited patiently for government help.

The romance of the family farm has been replaced by despair. Those who can no longer afford to keep trying are either selling their acres to larger "agribusinesses" or eager residential developers. Those that remain are hanging on by a thread, still optimistic that better days are just around the corner.

Some suppliers share that optimism. "I think that it is beginning to turn around," said Simon Soesan, vice president of marketing and sales for Alliance Ltd. "John Deere had a profitable fourth quarter, beating its own ag equipment sales projections by more than $60 million. While much of that came from new products and increased sales in overseas markets, sales increases in the U.S. and Canada also played a role."

"Because the farm subsidy bill passed so late, farmers really had to hold off on new capital investments and new tires," said Rami Bitran, director of sales for Trelleborg Wheel Systems. "And the down economy has really hurt, as have increases in food imports. But the good news is that ag OEMs forecasted a slight increase for next year, and recently they upped those projections, which has increased our expectations. But we have to see what happens with the economy and with global politics."

"The one boost we didn’t see this year that we thought we might see was anything material from the farm bill," said Mark Pillow, farm tire marketing director for Goodyear Tire & Rubber Co. "We didn’t see farmers break loose on purchasing new equipment or tires. And with the drought, a lot of farmers are waiting for the insurance adjusters to figure out how much they will get from their crop insurance because of the low yields they had."

After 14 months of Capitol Hill battles, the $248.6 billion Farm Security and Rural Investment Act of 2002 was signed on May 13. The bill creates a system of direct payments, counter-cyclical payments and other mechanisms to ease the financial strain on farmers – money farm equipment and tire dealers hoped would come their way this year.

However, not only was the bill late, critics say it doesn’t exactly spread the wealth. By their estimates, the top 10% of farm-subsidy recipients collect 66% of the available funds, while the bottom 80% of farms split just one-sixth.

And because the bill focuses mainly on cotton, wheat, corn, soybeans, rice, barley, oats and sorghum, most farmers – especially those outside of the traditional bread-basket states ®“ will be not eligible. In California, for example, farmers raising grapes, peaches, plums, nectarines, strawberries, almonds, lettuce, tomatoes, walnuts, and other vegetables are not eligible for aid.

"Even with provisions to soften the impact of an agricultural down cycle, growers know they are going to have to survive on efficiency. Good management, effective equipment and performance are all vital – and ag tires are a part of that," Soesan said.

"Now that the farm bill is in place, I believe row-crop farmers will feel more secure about investing for the next several years," he said.

No matter where you are, the weather is better somewhere else. Except this past year. Severe drought conditions, especially in the southeast and Midwest, helped drive ag replacement tire sales down 5% thus far this year, according to Goodyear’s Pillow.

At its worst, the eight-year drought of the 1930s – the Dust Bowl era ®“ scorched 63% of the nation. While this year’s drought put only 37% of the country in the "severe" category, farm losses will easily exceed $10 billion. Department of Agriculture forecasts say that wheat harvests will be down 14%, corn down 7% and soybeans down 9%.

"Another troubling trend is the amount of farm product imports coming into North America," said Pillow. "It’s projected that imported ag products in 2002 will reach an all-time high. Domestic prices are already near 20-year lows for beans, wheat and corn. All these things have a piling-on effect. It’s really hurting the ag economy and in turn hurting those selling ag tires."

Farm consolidations, which have contributed to a decline in the farm population, have been a double-edged sword for ag tire dealers. On one had, they have fewer total customers for ag, light truck and commercial tires. On the other, the larger farms created by consolidation are running larger equipment to improve efficiency. This has flung the door wide open to increased radialization – and new opportunities for dealers.

"Dealers know they aren’t going to sell the amount of new tires they have in the past," said Pillow. "So they’re placing a big emphasis on providing more service as a way to make inroads to sell a tire later. Farmers really appreciate when dealers are there when equipment goes down because of a tire problem."

"The larger farm operations put an even higher premium on efficiency," said Alliance’s Soesan. "We expect to see a bigger demand for large tires with the construction to handle heavy loads and high speeds as these larger operators tend more widespread acreage. This should bode very well for radials and high-speed flotation tires."

Farm technology, especially where it impacts farm yield, is more of a consideration. "The growing awareness of the effects of soil compaction on crop yields will also push many OEMs and growers away from duals and toward flotation tires," Soesan said.

"All in all, consolidation should lead to a more sophisticated tire customer," he said, "one who knows what he wants and can track its value through its performance on his equipment."

Bitran concurs. "To be more efficient, the larger farms are turning to larger machines which require larger and wider tires. Because driver comfort and soil compaction are key issues, radials and flotation sizes are more popular."

In terms of new products and technology, its seems all tiremakers have something going. "I think we’ll see more MPF tires – fast flotation tires," said Soesan. "They are big and heavy, but they allow dealers to add value for their customers.

"We are also introducing a radial flotation tire that enables producers to bring transport trucks into the field with minimal soil compaction and good performance," he said. "Farmers will be able to load right from harvest equipment on-the-go, then transport the product over the road to a plant, elevator or storage facility miles away. There’s no reloading, and no stopping the harvesters. That’s the kind of efficiency that will help growers succeed in tight markets."

"One new opportunity that we have is that we are now selling our rubber track products through our ag dealer network," said Pillow. "In the past, we only sold rubber tracks through OE dealers. So our dealers have a brand new product that none of our competition offers, and that’s been a big plus."

A big shakeout is looming, though. As farmers look to ag tires to deliver more performance and value, ag tire technology will become far more complex and require greater uniformity, and needed sizes will more difficult to produce. "I think the trend to increasingly heavier equipment will eventually separate the performers from the non-performers," said Alliance’s Soesan.

And that is another bright horizon. "An educated customer is good for manufacturers and dealers of high-quality tires. They see the value in performance, and are less likely to sacrifice the performance of a $180,000-plus machine to save a couple of hundred dollars with inadequate tires." 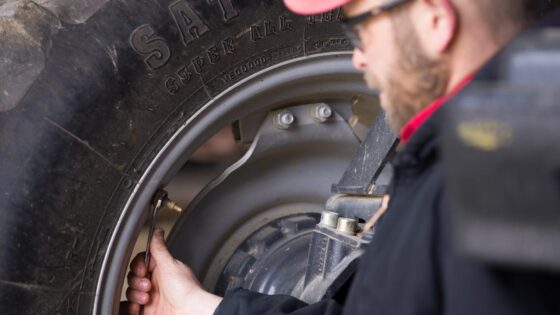