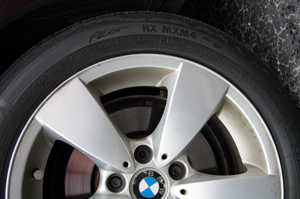 There is a lot you can tell about a tire just by looking at it. Federal regulations require most of that information to be branded on the sidewall, though not all of the markings are included on every tire. Let’s take a look at the markings and their meanings.

A metric tire’s section width is measured in millimeters taken from sidewall to sidewall. Here, the section width of the tire is 205mm.

The final number is the wheel diameter in inches.

On a 35×12.50R 17 tire, the first number indicates the tire’s approximate diameter in inches, though actual diameters vary from one manufacturer to another.

The section width is indicated in inches.

Here again the letter reveals the type of construction for that particular tire: “R” indicates radial tire construction; “D” for diagonal bias ply construction, and “B” for belted bias.

The next number is the wheel diameter in inches.

The manufacturer must include its U.S. Department of Transportation (DOT) Tire Identification Number (TIN) for safety standard certification and use in the event of a recall. Although commonly referred to as the tire’s “serial number” the TIN actually identifies production batches of tires rather than a specific tire.

The Tire Identification Number begins with the letters “DOT” indicating that the tire meets or exceeds the DOT safety standards for all tires sold for street use in the United States. Two letters that identify the manufacturer and the manufacturing plant follow the “DOT” marking. The third and fourth characters represent the tire size. The final three or four letters, determined by the manufacturer, are codes indicating other characteristics of the tire.

The entire TIN is only required on one sidewall; only the letters “DOT” and the first digits of the TIN must appear on the other sidewall.

The materials and number of layers of each material used to reinforce the rubber is set out in a format similar to this:

In this example, one polyester radial body ply is under the centerline of the tread, along with two belts of angled steel cord and one circumferential cap ply of nylon cord. In each sidewall (at the widest point between the tire’s inner and outer sidewalls) is one radial body ply of polyester cord, an extension of the same radial ply that lies under the center of the tread.

Belt edge strips used for circum-ferential reinforcement in many high performance tires cover only the inner and outer edges of the steel belts. They are not under the tread centerline, so they aren’t listed. Similarly, sidewall reinforcements used to improve cornering and steering response aren’t reflected in the branding because they do not extend to the widest points of the sidewalls.

Light truck (LT) and special trailer service (ST) tires are branded with two load indexes, separated by a forward slash. For example, a tire branded LT235/75R15 104/101S Load Range C has a load index of 104/101. “104” is the load carrying capacity on a truck with a single-wheel rear axle, and “101” is the capacity on a dual rear application.

Since the W and Y ratings are recent additions, “Z” is still often used in service descriptions, such as 225/50ZR16 91W, where the “Z” signifies a speed capability in excess of 149 mph and the ”W” the tire’s 168 mph maximum speed.

Load range/ply ratings do not count the actual number of body plies used to make up the tire’s internal structure, but they do indicate the load the tire is designed to carry at its industry specified pressure.

LT-metric, LT-numeric and LT-flotation tires are branded with their load range (for example, load range D or LRD) or their ply rating (such as 12 ply rated) on their sidewalls and include their appropriate load range letter in their descriptions, such as LT245/75R16 E, 31x1050R15 C or 7.50R15 D.

Euro-metric commercial vehicle/van tires can be identified by their size designations that end in “C”, such as 225/75R16C. Additional branding is used to indicate load index and maximum load/pressure for single and dual applications.

Special trailer service tires are identified by ST-metric sizes with load range branded on their sidewalls, (for example, ST205/75R15 LRD).

The maximum load and maximum inflation pressure are branded on the sidewall of tires sold in North America. Maximum pressure is normally given in pounds per square inch (psi) and Kilopascals (kPa), such as “Max. Load 635 kg (1400 lbs.) Max. Pressure 300 kPa (44 psi).”

Uniform Tire Quality Grading (UTQG) was established by the National Highway Traffic Safety Administration (NHTSA) to test tires according to government prescribed methods and then grade each tire on three characteristics:

Treadwear: This is the wear rate of the tire compared only to other tires within that tire manufacturer’s line. The baseline grade is 100. On the government’s course, a tire with a grade of 300 should last three times as long as a tire graded 100.

Traction: Traction grades are AA (the highest), A, B and C. They represent the tire’s ability to stop on wet pavement on a specified track.

Temperature: The temperature grades (from highest to lowest) are A, B and C. These represent the tire’s ability to dissipate heat under controlled indoor test conditions.

To make it easier for owners to identify and select exact replacements when their original equipment (OE) tires wear out, some vehicle manufacturers require their tire suppliers to identify OE tires with symbols or codes branded on the sidewalls.

“M+S,” “M&S” or “M/S” branding indicates the tire is designed for mud and snow applications.

The mountain snowflake emblem is present on
tires designed for severe snow conditions.

Lines, Numbers and Letters on the Tread

Multiple stripes and alphanumeric codes are frequently visible on a new tire’s tread blocks and on the bottom of the tread grooves. Manufacturing plants print these on tread slabs before a tire is assembled and its tread molded to identify the type and size tire for which a tread slab is intended.

What the Sidewall Won’t Say

No branding indicates how well a tire handles or how much dry traction it generates. Tires with “H” and higher speed ratings are generally assumed to handle better than tires with lower speed ratings. Similarly, tires with lower UTQG treadwear ratings are thought of as “softer” with more dry traction. Neither assumption is always correct, nor is there anything on the tire that makes an objective comparison possible.

The same situation exists for rolling resistance and fuel economy – you just can’t tell by looking.