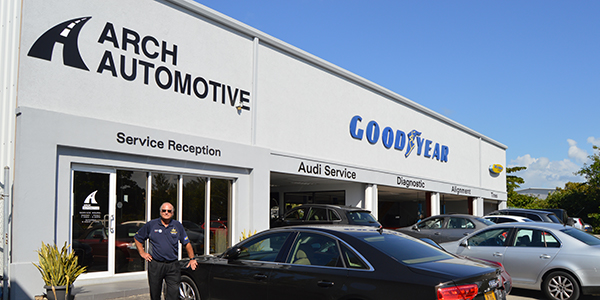 While some tire dealers may dream of packing up and moving to the Caribbean, Craig Arch found a way to actually make it happen. 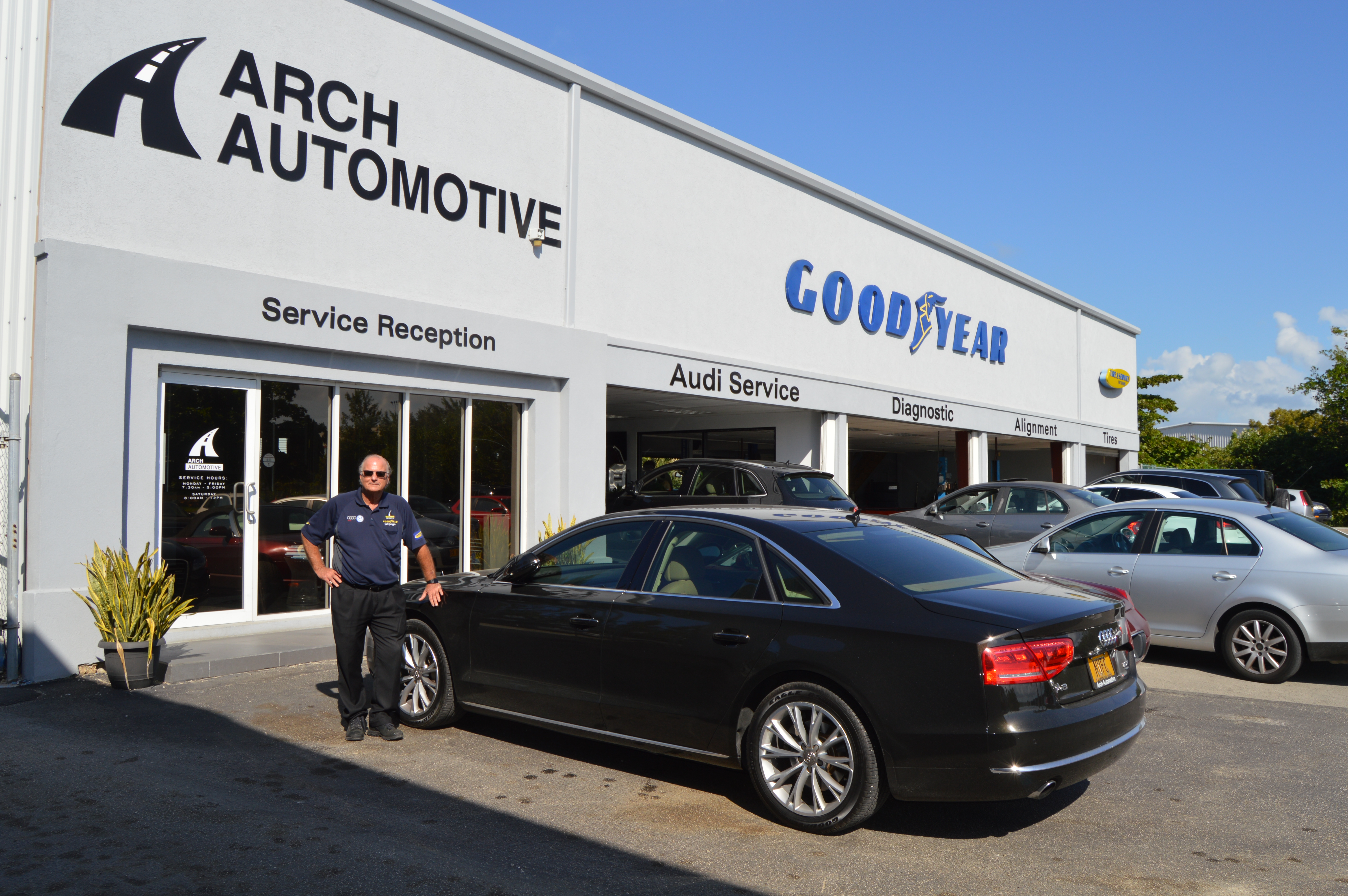 While some tire dealers may dream of packing up and moving to the Caribbean, Craig Arch found a way to actually make it happen.

Already the owner of several tire stores in Maryland, Arch would frequently visit Grand Cayman to see family members – an estimated 200 relatives live on the island. During many of his visits, he would steal away to spend time with the local independent Goodyear dealer there, to say hello and swap stories about the tire business.

But 16 years ago, Arch heard that his friend, Byron Ebanks, owner of Byron’s Car Care Center, had died.

“So, I called his wife and left her a message saying, ‘You don’t know me from a bundle of shingles, but I heard what happened and if there’s anything I could do to help out, let me know.’”

An hour later, the tire dealer’s widow called him back and they set up a meeting. Comfortable knowing that Arch and her husband had been good acquaintances over the years, she handed Arch the keys to the business on that same day in 2001 before money even exchanged hands.

“We just worked it out,” Arch says, “and I’ve never looked back.”

Located south of the famous Seven Mile Beach and on the northern edge of the island’s Georgetown district, today Arch Automotive handles the tire and auto service needs of many of Grand Cayman’s 60,000 residents. After having tire retail locations in the United States as part of the Goodyear network of independently owned stores, his shop in the Cayman Islands is the satisfying culmination of a long career in the industry.

According to Arch, the 10-bay shop is a high volume dealership and handles an average of 20 to 30 cars each day. He said the single location has enough business to be consistently busy, even turning people away with last-minute service requests, scheduling them instead for a future visit.

But the customers don’t seem to mind having to come back later. In fact, Arch says one of the best parts of running a business in Grand Cayman is the “island attitude” compared to the frantic pace of life in the U.S.

“People are more patient here; everybody’s more laid back,” explains Arch. “If you don’t get your car fixed today, it’ll be tomorrow, maybe the next day. They don’t mind. It’s not like somebody will come and yell at you. They just don’t do that stuff here. Unless, of course, they’re from the U.K. or from America – then you’ve got to just settle them down a little bit,” he laughs.

In addition to owning a retail tire store on the island, Arch also operates an Audi dealership, now located in the luxurious Camana Bay shopping and entertainment area. He also imports and sells Volkswagens. Service work on the vehicles is performed at Arch Automotive. As a result, he has become known as the go-to shop for the island’s more affluent residents.

In addition to being known for providing quality tires and a convenient service experience, Arch says his businesses get the best results by putting all of their marketing dollars into event marketing. That strategy includes throwing A-List events, including the exclusive Audi, Island Air & Tropical Aviation Luxury Party, an invite-only VIP event at the Island Air Airport Hangar.

“I go after the top 1% of the marketplace and throw the kind of parties that I normally wouldn’t be invited to,” Arch laughs. “The last one we ended up spending over $25,000 – and that was just for the champagne! Some customers buy a car from us just to be able to go.”

Arch is the first to admit that his high-end approach is not typical of most tire dealers. He said he upgraded the look of the tire store inspired by the expectations set by Audi. At the same time, he said it helps him attract a more upscale customer for tire and auto care, which he prefers.  “There are lots [of shops] in the middle, but that’s not where you want to be,” Arch explained.

He said traditional marketing methods are not as effective for tire sales on the island as compared to word of mouth, high-profile charitable event donations and other philanthropic activities.

“All 60,000 people [who live here] know who we are,” said Arch. “We don’t have to tell them where we are. We get a lot of our business because we sell a lot of cars and we will continue to service them. Tire-wise, you know we’re the quality tire dealer on the island. We don’t cater to everybody. There are a lot of people that’ll buy their tires up in the bush, but if you want a quality product – one that’s serviced and dealt with properly – then you come to us. People know that.”

Arch Automotive has 10 employees, including three technicians from Jamaica, one from Barbados and two who are local. Arch is also active in career fairs at local high schools to introduce the latest vehicle repair technology to students interested in the automotive industry. Technician training is provided online and by trips to Miami or Jamaica. Any Audi training based in Germany is streamed via video-conferencing.

Owning retail tire stores in two countries is a far cry from his humble roots changing tires while attending a community college. In fact, he never anticipated that he would be a duel citizen of both a U.S. and Cayman Islands and have an international career as a tire dealer. But life sometimes has other plans.

“I started as a tire changer when I was in community college in Maryland,” Arch shared. “That was my start. Then, when I was ready to go on to university, my dad, who was [born] here, was killed in an automobile accident. So, I came down [to the Caymans] for three years to finish up the businesses that he had going. He was a contractor. I was about 21 years old and when I got here, I had 80 people working for me – here in a second country, a different country. I’d never worked here or lived here. I just visited; I would come and spend summers, but I was in school in the States. But the theory was that I would get my degree in architecture, then I would come and I would build and design the houses and buildings that my dad was constructing. I guess [the plan] got a little bit off focus based on his death in 1971.”

Three years later, Arch returned to America. Once back in Maryland, he worked for Goodyear for about 10 years before deciding to leave. In 1986 he bought out an existing dealer in Severna Park, Md., and became a tire dealer, owner of Bay Area Tire & Service. Five more locations in Maryland followed plus his Arch Automotive in the Caribbean. 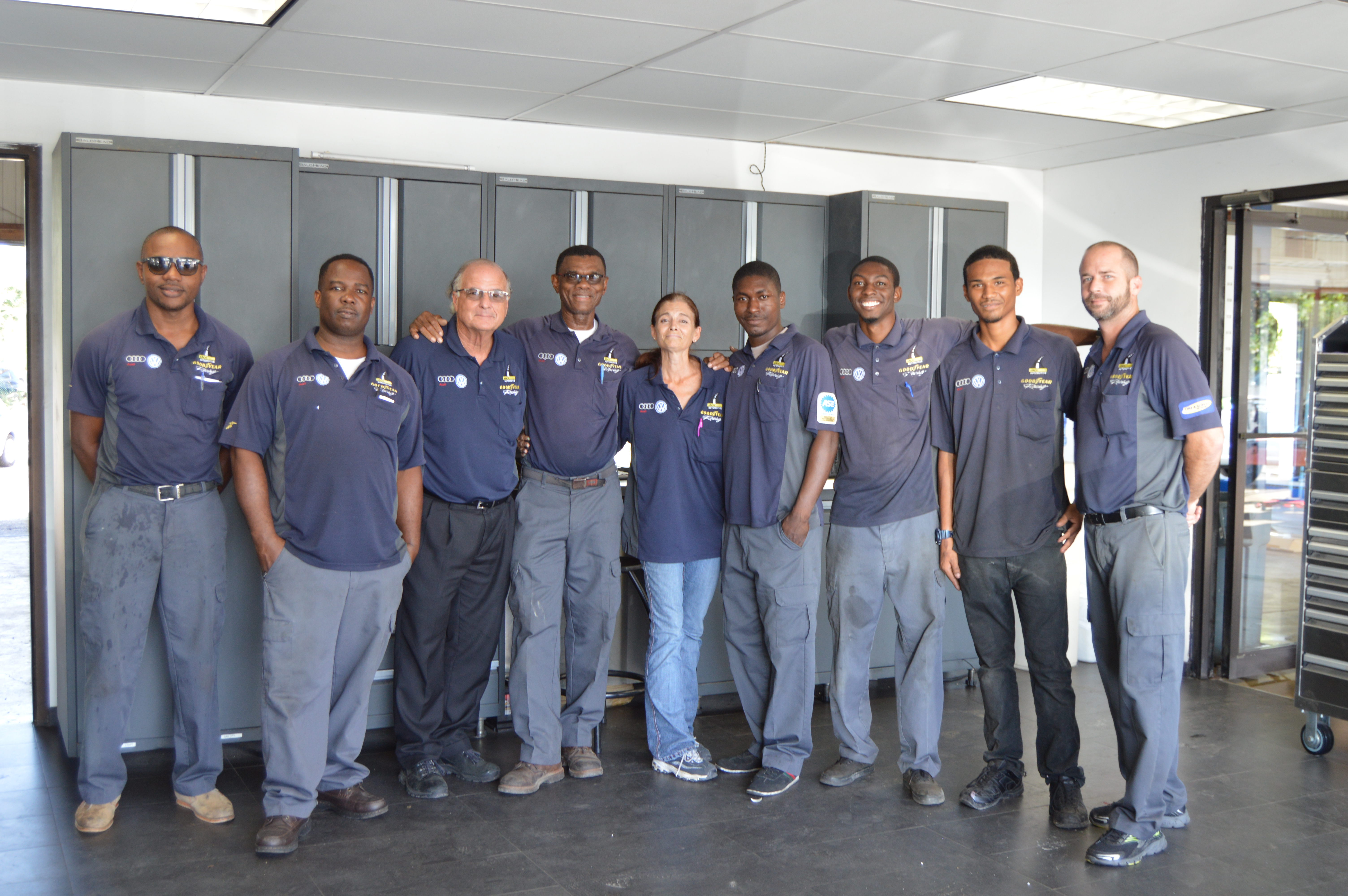 Even with his tropical dream-shop location and elaborate social events, Arch says he prefers to lead a simple life. Each day at exactly 3:58 a.m. he wakes up and gets his paper and coffee. He gets to the shop at 5:30 a.m. to review the previous days’ work orders. Workers arrive by 7:30 a.m. and by 9:30 a.m., Arch is off to his Audi dealership until 5:30 p.m. Saturday is a shorter day, 5:30 a.m. to 2:30 p.m. so he can enjoy a few hours of weekend. And every Sunday, Arch arrives at 5:30 a.m., alone in his empty shop, to scrub the floors himself and pitch what’s no longer needed, making sure everything is perfect for Monday morning.

“That’s my normal week. No complaints – I can’t wait to get up and come to work. Sunday is the most exciting day for me, to be able to clean the floors and squirt the hose,” says Arch. “Money doesn’t motivate me. I’m here on a mission to civilize the world. I’m trying to do my best every day to say ‘good morning,’ and ‘hi.’ I want [Grand Cayman] to stay the way it is and not become like the rest of the world.”

When asked what his plans are for the future, he shrugs and smiles, “I’m not sure; it’s just so exciting and so much fun – island life mixed with the hustle of owning a car dealership and tire store has its challenges. It’s really a tough business, but it’s just so much fun.”