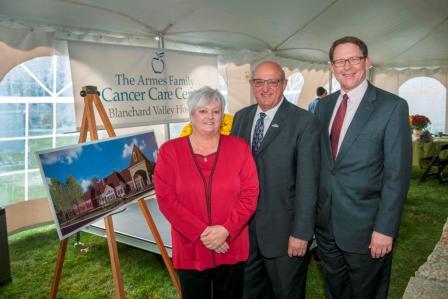 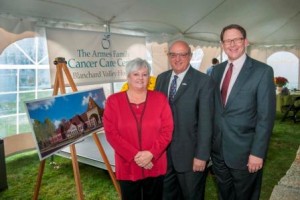 Roy and Marcia Armes have committed $1 million in donations to the new Blanchard Valley Health System Cancer Care Center in Findlay, Ohio, which will be named the Armes Family Cancer Care Center in their honor. The announcement of the gift was made at the groundbreaking on Friday, Nov. 14.

According to center employees, the Armes Family Cancer Care Center will combine nearly everything a patient needs for treatment and support under one roof.

For Roy Armes, chairman, CEO and president of Cooper Tire & Rubber Co., donating to the cancer care center is more than just a good cause. When Armes was an engineering student at the University of Toledo, his father was in the hospital fighting renal cell cancer.

“At one point he was on a painkiller that caused an allergic reaction of hallucinations,” Armes told The Toledo Blade. “I would get calls in the middle of the night to go to the hospital to help calm him down. I had to balance helping with his care alongside being a full-time engineering student and working a full-time job.”

Armes’ father eventually died at the age of 47. That experience has stuck with his to this day.

According to local reports, the total cost of the new cancer center is expected to be $5 to $5.5 million. Hospital officials told local media that the million-dollar commitment from the Armes family represents a huge first step.

Armes and his wife, Marcia, said this gift should lessen the burden for those grappling with a cancer diagnosis.

The center is expected to open by Sept. 1.