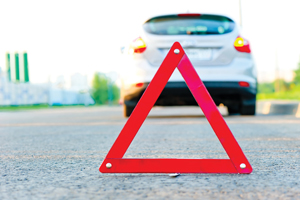 Springtime brings with it the vacation season when many families will hitch a boat or camping trailer to their fully loaded family car, SUV or pickup truck and travel to some remote wilderness hideaway. Needless to say, both the parents and their vehicle’s cooling system will be stressed out long before the trip is over.

At the technical level, it’s important to realize that the vehicle’s cooling system makes a huge leap from being under-worked during cold weather to being over-worked in hot weather. The seeping water pump or questionable cylinder head gasket that survived through the cold winter months can turn into a Frankenstein’s Monster when they begin devouring coolant in the midst of a hot summer vacation.

Fortunately, many cooling system problems can be detected by a thorough visual inspection of the vehicle’s cooling system. First and foremost, the radiator and air conditioning condenser must be free of leaves, insects and other debris that can restrict airflow through the engine compartment. But use caution when cleaning either component because delicate aluminum cooling fins can be easily ruined. In some cases, it’s better to remove the radiator for cleaning, than to risk using high-pressure air or water to remove debris in-chassis. See Photo 1.

The coolant reservoir is also a prime indicator of cooling system condition. A suspiciously low coolant level, for example, is the most definitive sign of a leaking hose, radiator, water pump or cylinder head gasket. While coolant levels must be occasionally topped off with a cup or two of 50/50 make-up coolant, the reservoir should not be empty, nor should it be clouded by excessive rust or contamination. 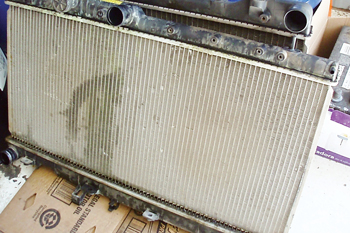 While they might appear in good condition, this stack of scrap radiators emphasizes the importance of inspecting for hidden leaks around the header tank seals.

The next step would be to pressurize the cooling system with a radiator tester. Although inspecting for water pump, radiator and hose leaks by pressurizing the system is often difficult in crowded engine compartments, it’s far easier to do when the engine is cold and the leak leaves a wet stain. When the engine is hot, the leak might self-seal, limiting the technician to detecting the typical antifreeze stains left by evaporating coolant

Modern coolants will generally protect the vehicle for at least 100,000 miles. Excessive rusting might suggest that the additive package is breaking down or that a non-recommended coolant has been mixed with, or substituted for, the OE coolant. In some rare cases, excessive rusting might suggest that the water pump impeller is badly corroded. If the coolant is contaminated with brown engine oil, the cylinder head gasket might be leaking oil between a cylinder head oil gallery and coolant water jacket or through a water-cooled engine oil cooler.

If the coolant’s color is similar to automatic transmission fluid, it’s highly probable that the oil cooler built into the radiator header tank is leaking. Last, check the EPDM rubber accessory drive belt for wear by using an approved wear gauge and, if so equipped, check the mechanical fan clutch for rotating resistance, bearing wear and fluid leakage.

Much depends upon the bi-directional functions on individual vehicle platforms, but a thorough scan tool diagnosis can indicate potential cooling system problems. The first test might be a simple calibration check that uses a “heat gun” to compare actual engine block temperatures with the parameter indicator data (PID) displayed on the scan tool.

Some Powertrain Control Modules (PCMs) might also store a history trouble code, indicating a severe engine overheat or an intermittent electric cooling fan, thermostat or engine coolant temperature (ECT) sensor malfunction. In other cases, the PCM’s diagnostic memory might indicate a misfire trouble code, which can be indicative of a leaking cylinder head gasket. Lastly, the scan tool’s bidirectional controls usually allow the technician to test the low- and high-speed cooling fan functions without performing an extensive engine warm-up procedure. 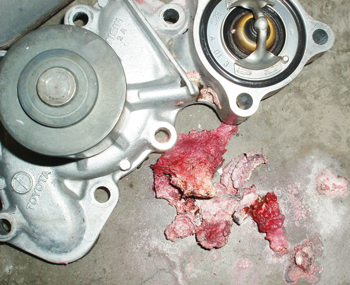 A leaking water pump concealed under a timing cover can create a coolant “icicle” that might fall into the crankshaft timing belt sprocket.

Water pumps fail due to noisy bearings, leaking seals, and corroded or slipping impellers. Detection of noisy bearings and leaking seals can be difficult to determine if the water pump is concealed under the engine timing cover. If the cover must be removed for access, it’s time to inspect the serpentine drive belts, timing belts and idler pulleys as well as the water pump itself.

In Photo 2, this 3.4 L Toyota water pump, which is hidden under the front timing belt cover, can create a coolant “icicle” through minor seepage. This “icicle” can fall into the crankshaft timing belt sprocket, causing a camshaft timing error. Issues like this are a major reason many experienced technicians replace all rotating parts during a timing belt replacement. 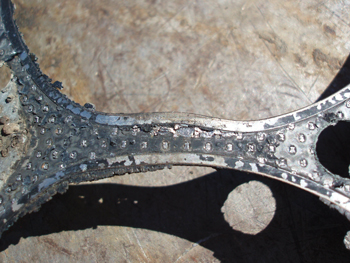 Although this cylinder head gasket passed a compression test at 130 psi cranking pressure, it was close to failing.

Minor leaks can often be detected by “sniffing” the coolant reservoir with a chemical exhaust ­detector or very carefully with a conventional exhaust gas analyzer. Photos 3 and 4 illustrate the difficulties of analyzing cylinder head gaskets with a compression gauge or cylinder leak detector. 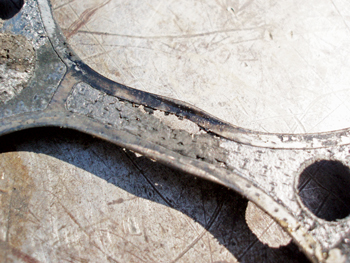 This companion cylinder head gasket failed at 30 psi cranking pressure. The cylinder head itself developed a cracked exhaust port due to subsequent overheating.

For this reason, many technicians have developed their own cylinder head gasket testing methods, which include adapters for measuring increases in radiator pressure as the engine is cranked with fuel disabled. Measuring these pressure increases can be done by using methods as simple as taping a sandwich bag to the radiator or reservoir filler neck or, on a more complex level, by using a labscope and pressure transducer.

Lastly, it’s possible to seep coolant into the crankcase on engines with coolant ports connecting the cylinder head to the intake manifold. In most cases, the problem is caused by a faulty intake gasket design. The most prominent symptom of failed intake gaskets or cylinder head gaskets is the engine oil exhibiting a paint-like viscosity. In extreme cases, the oil level will be over-full and will have the viscosity and look of a chocolate milk shake. See Photo 5. 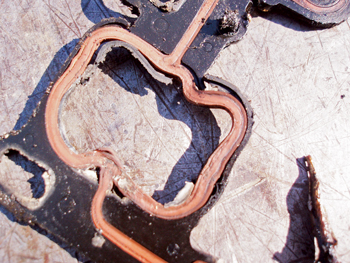 Although relatively rare in import vehicles, the intake manifold gaskets on some engines can fail at the water port.

Modern aluminum cylinder heads and intake manifolds require special resurfacing techniques to ensure a polished surface on the head-to-gasket interface. The polished surface is required to accommodate minor slippage caused by the normal difference in expansion rates between the cylinder block and cylinder head. In addition, many modern engines require replacement of their torque-to-yield cylinder head bolts. Since some cylinder head bolt threads are lubricated out of the box; follow the manufacturer’s instructions for correct installation and torqueing sequence.

Lastly, torque all intake manifold bolts to manufacturer’s specifications because excessive torque on intake manifold bolts can affect the cylinder block main bearing alignment. Doing the job right the first time ensures both profitability on the head gasket replacement and a happier vacation for your customers.

Service: Keeping Up With Tire Innovations

Finding Your Total Shop Solution
Connect with us