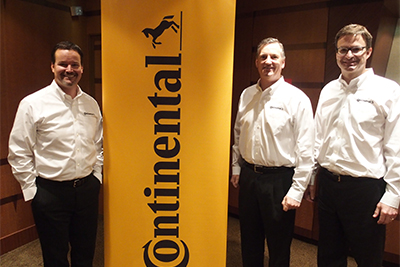 It was a big year for Continental Tire the Americas’ Gold Dealer program, with a record number of tire dealers qualifying for its 10th annual incentive trip. This year, 304 dealers, including 31 new Elite dealers, sold more than 2,000 units each in 2014 to qualify for a cruise through the Caribbean between March 23-29. 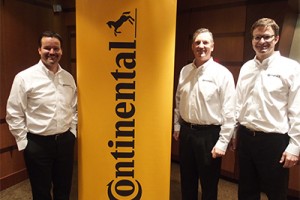 Conti’s 2014 Gold Dealer Meeting was about turning the corner and becoming the dealer’s number one program. In 2015, Conti talked about how the tiremaker is continuing its work towards No. 1 status.

During Conti’s business meeting, the tiremaker recapped what it worked on in 2014, announced four new tires, unveiled a new website and new programs available to dealers.

Bill Caldwell, vice president of sales and marketing, kicked off the meeting addressing some of those concerns.

He noted that in the past Continental has struggled with fill rate, but it is a problem that the tiremaker has been working diligently to put behind them.

Part of the increase in fill rate can be attributed to the new Sumter, S.C., plant. In 2014, the plant produced nearly one million tires.
In an interview following the meeting, Caldwell told Tire Review that the plant is on schedule for its 2017 goal of producing 4 million tires annually. In 2015, most of the focus at the plant will be on producing a greater range of sizes.

“It’s much harder to build 800,000 tires annually if you have to build 20 or 25 different sizes in smaller lots and more frequent change overs,” he shared. “This year, a lot of focus will be on the plant learning about complexity and change over efficiency and how to still hit the volume targets.”

The improvement in fill rate can also be attributed to new planning meetings, Caldwell said. The tiremaker has been meeting monthly with some of its largest distributors to make sure tires are being deployed to the correct regions of the country.

During the dealer meeting, Caldwell also addressed dealer concerns about the company’s OE participation. Continental has roughly a one-in-three share of OE fitments on European-produced vehicles and a one-in-six share on U.S.-produced vehicles, he said.

The tiremaker plans on growing its OE business but wants to do it responsibly, so it doesn’t want to rob the ability to fill replacement orders to satisfy new OE business, Caldwell said.

Dealers can find out about new fitments in CTA’s Gold Connection newsletter available on its dealer portal, also home for CTA’s fitment guide/databook.

Addressing dealer concerns for more products, Conti is launching four new products in 2015 and has plans for more in the future.

“We will work very diligently to fill our product portfolio so you have more business opportunities with your customers and with us,” said Joe Maher, product manager for Continental.

The Winter Contact SI is a studless winter tire for passenger cars, minivans and CUVs. The tire replaces the ExtremeWinterContact, comes in T and H speed ratings and will be available to order in spring 2015.

The Grabber Artic LT replaces the AltiMax Artic LT and is designed specifically for use by light trucks. The tire is pinned for studs and is rated for load range E. Tire dealers can start ordering the tire in spring 2015, with tires shipping in the fall.

The General Grabber HTS60 will be available in 2015, but the tiremaker did not provide any detail about the tire.

New in 2015, Continental will also offer a Total Confidence Plan to consumers for all of its replacement tires.

Providing the card to customers gives dealers benefits as well, Continental said. With the deferred interest, the card can help consumers make the jump from a less expensive tire to a premium product.

“By putting that tool in the dealers hands, we’re hoping they can sell a more premium product for the consumer’s vehicle and satisfy the customer with better product,” Travis Roffler, director of marketing, told Tire Review. “Then it creates a loyalty reward program; when you get the bill in the mail that dealer has the opportunity to added other incremental offers at his dealership.”

Dealers who sign up a customer for the card will also see their name branded at the bottom of the credit card, Roffler said.

Also announced, Continental’s U.S. website is getting a new look.

The former site contained information from all of Continental AG and was difficult for consumers to search for what they needed, Roffler said.  Launched April 1, ContinentalTire.com was revamped to enhance the consumer experience.

“We really tried to simplify and focus on the buying experience,” Caldwell told Tire Review.

The tiremaker was quick to note that the new website doesn’t mean the company is looking to sell direct to consumers though.

The new mobile-friendly version of the site also includes enthusiast information for those who follow racing, a tire finder and dealer locator. All Gold dealers will be included in the company’s dealer locator and any dealer that sells more than 400 Continental tires in a year will also be added.

CTA has also shifted its advertising goals for 2015. This year, the tiremaker will move away from Continental-branded advertising to product-focused messages, Roffler said.

One reason the tiremaker is making the change is because it has a lot of new product coming out, Roffler said.  The tiremaker is also using the advertising as a chance to drive new business to its dealers.

“At the end of the day, you want the Continental brand known, but if you can bury it down in the message and get the ExtremeContact DWS06 out there, that’s what we want,” Roffler said. “We want consumers coming into the store that are not only familiar with the brand but the tire line, as well.”

The last two consumer promotions, “Making Trails” and “Taking Detours,” are being finalized and are scheduled for the second half of 2015.

As part of its branding efforts for 2015, Continental is continuing its sponsorships with the U.S. Soccer Team, Major League Soccer as well as its support of 21 different college basketball teams and IMSA. The tiremaker’s General brand is also involved with the Lucas Oil Series of racing, 4-Wheel Jamboree, the World Cup of Softball and Major League Fishing.

Several consumer promotions have been scheduled for 2015 as well.

The “Grab Your Cash” promotion runs April 3 to May 1, with consumers receiving a $50 to $70 American Express prepaid card with select purchases. With the “Make the Mark” promotion, which runs May 29 to July 5, CTA will celebrate the launch of its Continental ExtremeContact DWS06 with a $70 prepaid Visa card.

To better service its Gold Dealers, CTA has expanded its sales team to include 12 new regional Gold Coordinators. The company will also be adding more coordinators in coming months.

Continental also discussed new incentives for Gold Dealers, who can now earn double RPM rewards in April on the current ExtremeContact DWS and the AltiMax RT43.

Continental is offering launch incentives for its new ExtremeContact DWS06. Any Gold Dealer that reaches their minimum quarter attainment target objective will receive $7 Everyday Gold Rewards on every ExtremeContact DWS06 purchased and shipped during the second quarter, plus $3 additional per tire as part of the launch incentive. Dealers that purchase 24 DWS06 tires on one invoice will also be entered to receive one entry into a drawing for a deluxe VIP trip to the Rolex 24 at Daytona.

CTA’s General brand celebrates its 100th anniversary in September 2015, so the Gold Dealer trip included a birthday party for the brand. During the party, dealers had the chance to win a private showing of Furious 7 for 250 people in their hometown.

CTA is also hosting a consumer social media contest in honor of General’s birthday. Between May 26 and July 28, consumers can submit a creative photo that wishes General a happy 100th birthday on Twitter, Facebook or Instagram, using #GT100, for the chance to win prizes.

Continental concluded its reward trip by announcing that its 2016 dealer meeting will head back to Cancun, Mexico, on April 11-15, 2016.