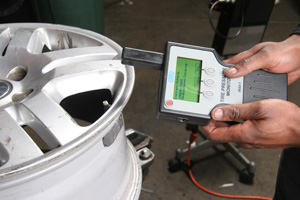 Even though it has been a few years since tire pressure monitoring systems were first mandated on U.S. cars, the quest for the “perfect” system with the most effective sensors has been an ongoing pursuit.

The same is true for the TPMS tool manufacturers and marketers. Progress is being made on both fronts in North America, but the worldwide economic conditions and other factors make that movement a continuous effort. The March announcement of the European Union mandate on TPMS implementation starting with the 2012 model year is the latest industry news that could have significant implications for TPMS sensor and tool manufacturers and marketers, and it could accelerate development.

“That (EU) compliance mandate is very favorable to our technology,” said Carl Wacker, vice president of global sales and marketing for Schrader Electronics. “We estimate that by 2014, the global market for TPMS will double.” This, he said, includes sensors, tools and a variety of supporting products and services.

According to Global Information Inc., a market research group, the TPMS sensor market could surpass $300 million by 2012. That’s good news for Schrader, as well as for other TPMS manufacturers and suppliers.

“We’re already in 25% of [the European Union’s] car plants,” said Scot Holloway, general manager of Bartec USA. “And we’re in all the GM plants.”

In the TPMS sensor world, there have been few significant developments since the early clamp-in types were introduced. The battery-less sensor drew some attention, but the market has yet to totally embrace this technology, likely because several OE car manufacturers have their own opinions as to which is the best system.

Therefore, the EU’s decision comes at a good time for the industry. Ford is weaning away from banded sensors in favor of new snap-in sensors, and Schrader is working on a new wireless auto location, or WAL, sensor for Chrysler in the Charger and Challenger models assembled in Canada.

“This new system will relocate and relearn automatically,” said Schrader’s Wacker. “It eliminates antennas in the wheelhouse.”

Regarding other movements in sensor technology and usage, Holloway adds, “Subaru has changed its strategy and they are now using both the clamp-in and the snap-in styles of sensors on certain models. Also, Hyundai and Kia have added a new twist to the sensors they are using. Depending on the vehicle model, the sensor’s status has to be changed from ‘high’ to ‘low.’ This again requires a special LF command.”

With so many TPMS system and sensor changes, it’s impossible for any tire dealer to stay on top of things. And those changes place added pressure on companies like Autodata Publications, for instance, that produce TPMS data manuals by make, model and year. According to Richard Gunderson, Autodata vice president and general manager, his company is constantly updating its data to assure users of the most up-to-date information.

Regarding tools, K-Tool International’s product manager Chris Batts said, “There have been recent updates to software, but the [tool] market has matured somewhat.”

However, the manufacturers continue to make progress into the “graying” market, and they are driven primarily by the Asian automobile OE companies that, up until now, have held proprietary TPMS data close to their chests for some time. For example, late last year, Schrader International introduced a new TPMS learn-and-test tool kit that included an onboard dash adapter designed for Toyota, Nissan, Hyundai, and Kia TPMS.

The kit works as both a scan tool and a TPMS tool, and Schrader says that it eliminates the need for separate OE and aftermarket scan tools for these vehicles. The kit includes a rechargeable battery and charger, and comes in a convenient hard plastic storage case.

The model 21225 OBD Connector is available separately for customers who already own the 21220 Learn and Test Tool. Schrader said that there are plans to add Acura, Lexus, Infiniti, Honda, Subaru and Mitsubishi compatibility in the near future.

Bartec’s Holloway said that his company’s new TECH400 TPMS tool is a jump-start for the EU mandate as it already is designed for Asian and European manufactured vehicles. But, he adds, “The majority of the Asian vehicles have adopted a repair process that has made aftermarket repair of TPMS difficult. While there are some TPMS trigger tools that can activate and decode the sensors found on Toyota, Honda and Nissan vehicles, in each of the cases another tool is required to perform sensor replacement – that tool is a scan tool.”

The tools – both mechanical and electronic – continue to evolve, but  “What we’re seeing is that customers are now looking for next-generation or higher-end TPMS tools,” said Holloway. “We’re fielding 80 to 90 calls a day from customers who just want information.”

While it appears that sensor and tool technology might be slow, Bartec’s Holloway added, “Unfortunately, the only thing consistent about TPMS is the change that seems to occur on a regular basis. To navigate through this challenge-filled opportunity, you still need knowledge, training, technical support and, of course, superior tools.”