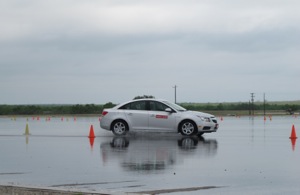 With 5,000 total acres, including a 15-acre wet pad and an 8.5-mile high-speed oval, Continental Tire the Americas’ proving grounds in Uvalde, Texas, is the perfect locale to roll out a new tire – as well as put a recent release to the test.

The tiremaker did just that at the end of April, when it invited key dealers and tire trade media to the General Altimax RT43 launch event. In addition to several track exercises that pitted the new tire against the competition, Continental also offered plenty of seat time on the ContiPureContact, which the tiremaker introduced a year ago.

According to Joe Maher, passenger product manager, the General Altimax RT43 – which replaces the Altimax RT – features two new technologies designed to help provide the consumer with impressive value. “The goal was to improve the tread life of the original while offering all-season traction and a smooth, comfortable ride,” he said.

“Our tire engineers have combined several technologies to give the consumer an all-season touring tire that is a notable value,” said Travis Roffler, director of marketing. “We have married together two new technologies with our existing Replacement Tire Monitor and Visual Alignment Indicator technologies for one fantastic tire.

“Our team has constructed a tire that is stylish and gives the consumer a solid value while providing the performance they demand,” Roffler added. “This is important to our customers, who are looking to stretch a dollar in today’s economy.”

The new tire will be available to consumers Aug. 1; CTA began taking dealer orders May 1. While the Altimax RT43 is designed and distributed for the U.S. market, it is manu­- factured in the U.S., Europe and South America, Maher explained.

“We are preparing for the launch with a very attainable plan to reach full launch volumes,” he said. “Because manufacturing is split among several plants, we will have the ability to respond to market demand.”

Performance on the Track 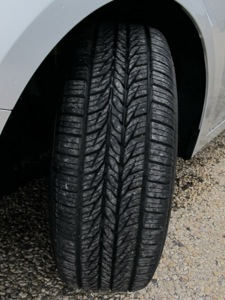 At the launch event, the Altimax RT43 was compared to several competing products in a variety of track exercises, fitted to Chevrolet Cruzes in each case: against the BFGoodrich Advantage T/A in wet braking; versus the Kumho Solus KR21 in wet autocross; and against the Cooper CS4 and Hankook Optimo H727 in wet handling.

Conti also offered educational sessions at the event, using General Altimax RTs shaved at 4/32nds and 2/32nds in a wet braking demonstration. Fitted to V6 Ford Mustangs, attendees were able to experience firsthand the difference in stopping distance that an additional 2/32nds of rubber provides.

“It’s tough to find a tire that competes in all three categories and fits such a broad range of vehicles,” Maher said. “Dealer feedback so far is that the RT43 offers very good performance against the competition and they really like the pattern, which offers lots of biting edges.

“The target consumer for the Altimax RT43 is primarily interested in a good balance of perfor­mance – wet, dry and snow – but is also look­ing for a good value and a smooth, comfortable ride,” he added.

Tire Rack’s Brian Joines, who attended the Uvalde launch event, said, “This fills the standard touring category, which is what you see on all kinds of vehicles from commuter cars to minivans. These customers are typically looking for a tire with good mileage, a quiet ride and good all-season handling.

“Continental and the General brand have really made a name for themselves with wet traction,” he added. “They have a lot of good-performing tires in many of the top categories.”

Roffler added the competitively-priced RT43 corrects the shortcomings of the Altimax RT, which were mileage and snow performance. “The new tire’s technology change has led to a paradigm shift in mileage – the RT43 will see a dramatic increase in wear.

“Low Surface Abrasion technology is an actual construction change that shows a substantial double-digit gain in wear,” he said. “The original RT tended to wear on the inside and outside shoulders; the RT43 shows even wear because of LSA technology, even though siping is increased. The increase in siping while offering reduced wear is the paradigm shift.” 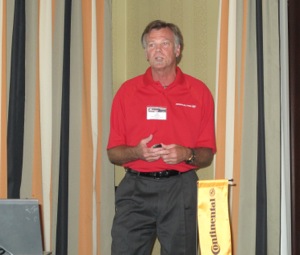 PureContact Recap
“We also wanted to use this event to reiterate the features and benefits of the ContiPureContact, in addition to showing the Altimax RT43 within its position as a tier two tire against Cooper, Hankook and Kumho,” Roffler said.

Part of the reasoning behind the dual event was that Continental staff had started hearing that dealers thought the PureContact – which the tiremaker dubbed as a “luxury performance all-season replacement tire” – was replacing the ExtremeContact DWS.

“The Pure has DWS technology (dry, wet and snow), but it is not replacing the ExtremeContact DWS,” Roffler said. “It was launched in conjunction with the Extreme, not in place of it.”

The Uvalde event offered track time on the PureContact, since at its launch last year event attendees experienced the tire mainly on the streets of Indianapolis. This time around, the ContiPureContact was pitted against the Michelin Primacy MXM4, fitted to BMW 335 sedans in a wet braking exercise, as well as against the Michelin Primacy MXV4, fitted to Cadillac CTS sedans in a wet autocross.

“It’s a clear difference in handling and the ability to maintain control,” Maher said. “We thought this was a great way for dealers to experience this first-hand to help educate their customers.”