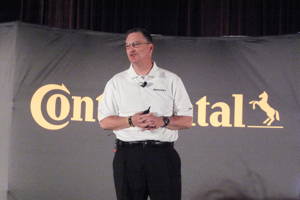 Over the nearly 10 years of its Gold Dealer Meetings, Continental Tire the Americas has alternately spent time apologizing for poor fill rates or addressing other shortfalls in product, production or pricing. Such is the lot for a company that has been both building and repairing itself over the last decade.

This year’s gathering – one part business meeting, one part incentive trip for the 200-plus dealers that purchased more than 2,000 Conti or General brand units last year – had an entirely different tone filled with confidence and earnestness.

“We want to be your number one” was the permeating theme of the gathering at the Hard Rock Hotel in Cancun, Mexico. It was parsed throughout every segment of the 90-minute business meeting and in every group event hosted over the four-day event.

There were no apologies or explanations, just a clearly defined case and supporting “evidence” as to why CTA deserved to be at the top of their dealers’ tire purchasing schemes. “You are our number one,” said Bill Caldwell, vice president of marketing and sales for CTA consumer tire group. “We want to be your number one.”

Notable was the addition of new production from CTA’s freshly opened passenger and light truck tire plant in Sumter County, S.C., which will produce some one million units by year’s end and will progressively increase its output to 4.2 million tires by 2017.

Having greater local production has been a vital step for CTA, which has been sourcing product from various Continental AG plants in Europe and South America. Many of those tires are still coming in, though, and the addition of Sumter product is meeting current growth needs. As a result, CTA fill rates are at their highest levels in years, officials said.

“We turned the corner on being able to supply to a level we expect to,” Caldwell told dealers, and the growing supply allows CTA to be more aggressive going forward and make a bold play to be a dealer’s top unit supplier. 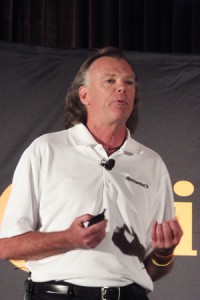 Product manager Joe Maher ran through the new TrueContact and size upgrades to the Altimax RT43.

While no new products were announced at the event, product manager Joe Maher updated dealers on both the recently released Continental TrueContact and the General Altimax RT43.

The TrueContact, an all-season touring line, gives dealers another tool to meet the needs of the growing CUV and standard touring segments. The tire is available in 31 sizes over T-, H- and V- speed ratings and 15- through 19-inch wheel diameters. The T-rated TrueContact carries a 90,000-mile warranty; the H and V versions have an 80,000-mile warranty.

Further, he noted, CTA is adding new modules to its Engage 360 online dealer education system, specifically covering the TrueContact and Altimax RT43, as well as a tire selling skills session. And before he left the stage, Maher reiterated, “We want to be your number one. We have the products, technology and innovation to exceed customer expectations.”

Gold Program Changes
Gold program manager Chris Jen­kins walked dealers through changes in the program that he said add to CTA’s value proposition to dealers. In short, Gold dealers will now enjoy a “simpler program,” and larger cash incentives to reward their purchasing.
For 2014, CTA has boosted its marketing rewards to $7/unit across the board for six top end Continental branded lines and $5/unit for the General G-Max AS-03, Grabber, Grabber AT2 and the Grabber HTS, Jenkins said. For Gold Dealer Meeting attendees, that translates into a cash back per tire average increase of $1.61 or $5,145 for the year.

Jenkins also outlined tweaks made to the Gold Rewards Tracking Tools, another move to simplify the system for busy tire dealers. And he closed by reminding attendees that, “We have all the dealer tools, support and incentives to make our partnership really work for you.”

Marketing
Fresh off of its “Need for Speed” movie tie-in promotion, CTA headed straight into a Continental brand-oriented “Take a Road Trip on Us” spring promo (May 5-June 2) that awards a two-night Marriott hotel getaway to drivers buying four Conti brand tires at $499 or more.

Marketing director Travis Roffler also related a pair of General brand promotions that will come later in the year, as well as the freshly mint­ed POP materials to support the TrueContact launch, and changes to CTA’s website dealer locator to improve look and functionality, be mobile-friendly, add space for dealers to list services, and allow search by specific address, city or Zip code. 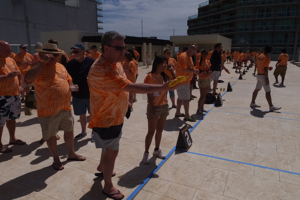 Serious prizes were at stake when Gold dealers competed in the Conti-Toss cornhole tournament.

Going forward, CTA is sticking with its sponsorships of IMSA sports car racing, including the Continental Tire SportsCar Challenge and the Rolex 24 Hours at Daytona, which gives CTA numerous hospitality events throughout the race season. Also supporting the Conti brand, Roffler said, are the continuation of CTA’s sponsorship of Major League Soccer and the U.S. men’s and women’s soccer teams, as well as Continental AG’s international sponsorship of the upcoming World Cup in Brazil.

On the General side, he said, sponsorship of the various Lucas Oil motorsports series would continue, covering more than 150 events across the U.S., as well as major off-road racing events.

New will be consumer and trade advertising campaigns to support both brands. The new Continental print and TV ads, he demonstrated, use specific colors to key on eco, performance and performance attributes against a “For What You Do” tagline.

“#Anywhere is Possible” tags the new General brand print and TV ads; the incorporated hashtag is intended to draw consumers into a Twitter conversation about the featured General lines. The print ads focus on Grabber products and all carry GPS coordinates to the exact location depicted in each of then three ads. Both the print and TV ads give a bit more nod to the female audience, as well.

Completing the circle, all of these activities and more, he said, demonstrate that, “Our marketing and activation efforts are designed to support you in achieving your sales goals.”

Moving Forward
On the people side, national sales manager Sean McDermaid announced that CTA was following through on its 2013 vow to expand its sales reach with new field personnel. Once the project is completed, several new salespeople will be deployed as well as 16 regional Gold program coordinators who will work directly with dealers and help develop new Gold dealers.

Rounding out the program, Jim Sicking, director of dealer channel sales, recounted the key points of the meeting for dealers, again building the case to be each dealer’s top brands in unit sales.

Conti Takes a New Tone to Its Gold Dealer Meeting