The tiremaker has reportedly applied for patents for its Rainbow Tires line, which will offer tires in bright blues, greens, reds, pinks and yellows, plus camouflage and khaki-colored for military use.

According to an article in ChinaCarTimes.com, the board of the Qingdao-based Double Star Tire Co. plans to make a series of colored tires. 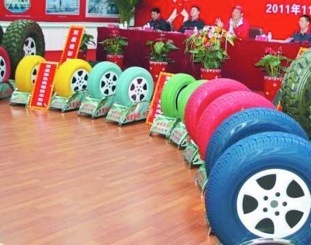 The tiremaker has already applied for patents for its Rainbow Tires line, which could be on the market very soon, according to reports.

And “rainbow” is a fitting description – the tires will reportedly be available in bright blues, greens, reds, pinks and yellows, plus some khaki-colored ones for military use.

While other forms of transportation – motorcycles and bicycles, for example – have seen colored tires before, the idea is new for the automotive market, in which tires are black due to the carbon content in the rubber. Carbon black not only affects the appearance, but gives tires their longer-lasting characteristics.

According to inventorspot.com, “one must either assume Doublestar has found a way around this particular bugaboo or they assume the market for colored tires (pink Ferrari owners, we’re looking at you) doesn’t really put much mileage on their vehicles.”