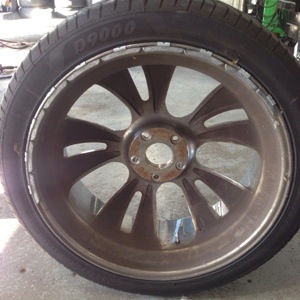 It has happened to all tire techs, probably more than once. You balance a tire, put the weights on, drop the hood again for a check spin – and the balancer comes up asking for more weight.

This little play is called “chasing weights,” and is a seemingly endless cycle where the balancer keeps asking for more and more weight, usually in different places. Most techs know from experience what to do and what not to do when this happens.

Unfortunately, from my own experience seeing wheels much like the one pictured come into my shop, there are still a good number of techs out there that don’t quite understand the phenomenon.

“Chasing weights” is one thing, but an inexperienced tech could really go over the top and add far too many weights.

The first rule of chasing weights is simple: If the balancer asks for weights more than twice, some­thing is wrong. There are times when the first check spin shows more weights are need­ed. In these cases, the weight involved should usually be around one-quarter ounce, and the balancer should want it placed either in the same place as the previous weight or 180 degrees opposite.

This is due to round-off error – the balancer works in quarter-ounce increments, and the first balance check involved an increment that was either slightly less or slightly more than one-quarter ounce.

But if the balancer keeps asking for more and more weight after the resulting check spin, or if it’s asking for weight at 90 degrees to the first weights, it’s chasing weights. You need to stop the balancer and start thinking; there are a few different possibilities as to what the problem could be.

What To Check For

First, the wheel might be improperly centered on the cone. Check to ensure it is seated properly, as sometimes the cone will catch on an edge or simply be the wrong size for some wheel centers.

Also, check the wheel’s hub center to ensure that the center hole is not damaged enough to affect roundness. If the hub center is damaged or it will not seat properly on the cone, you may need to use lug-centering equipment that clamps the wheel to the balancer through the lug-holes.
Another issue could be something inside the tire. The number and variety of things that can get left inside a tire can be truly astonishing. Whet­her it’s old wheel weights, broken TPMS sensors, ratchet wrenches, water or liquid squirt-in “repair” material, anything inside the tire will affect the centripetal force as the tire spins, then come to rest in a different place and do it all over again, continuously and dynamically throwing off the balance.

The tire and/or the wheel being out of round can also cause “chasing weights.” The first mathematical assumption any balancer makes is that the assembly is round to within a certain tolerance. If the wheel is bent, or the tire has a belt separation, this can throw off the balancer’s calculations.

Sometimes this can throw the balancer into a kind of infinite loop where it just can’t zero out properly. Sometimes it will allow the balancer to zero out even though the balance is still wrong. Always watch the wheel as it spins to make sure it is spinning straight and true.

The final possibility is the tire may be improperly match-mounted. Match mounting can be a headache of a concept to remember, because there are two ways of doing it.

The headache is in remembering that tires carry a red dot on the sidewall for radial matching, which should be matched to a marked spot on the wheel, or they carry a yellow spot for weight matching, which during mounting should be set directly next to the valve stem.

In general, however, all the mat­ching spots tend to be close together, so if in doubt it’s generally good enough to simply match the dot to the valve stem. But, in some cases, if the match mount is way off, this can create enough force to completely screw up the balance, and the tire will have to be moved on the wheel until the dots match to fix it.

These last two conditions, bad match mounting and being out of round, can often be fixed by road force balancing, precisely because one of the things a road force balancer does is read out the radial variance of both the tire and the wheel to calculate their positions for a proper match mount. If a wheel is slightly bent, for example, the balancer can calculate where the tire should be placed to minimize the total radial variation of the assembly, which can fix the balance issues and also cut down on any vibration when the assembly goes on the car.

The last possibility is that the balancer is simply out of calibration. If you can’t see any obvious reason why you’re chasing weights, or if it happens on multiple wheels, you’ll want to do a full calibration sequence. You’ll also want to check the spindle area on the balancer – I once had an issue that defied all easy solutions until we realized that some stray adhesive weights had attached themselves to the mounting plate.

That being said, while this list will cover most of the reasons that the balancer chases weights, some issues will defy easy solutions, whether it’s a rogue set of weights somewhere or some problem I can’t even imagine.

As I used to say to my techs, “Let it be a challenge to you,” which is, of course, manager code for, “I don’t have a clue how to solve this.”

Advertisement
In this article:tire techs

Are You Chasing or Catching?