[Editor’s Note: The following story by Paul Luke appeared in The Province on June 7. It commemorates Kal Tire’s relationship with Vernon, B.C., on the international dealer’s 60th anniversary year.]

Great empires deserve great capitals. The Brits ruled from London, the Babylonians from Babylon, the Mongols from Karakorum.

Kal Tire holds sway over its global domain from Vernon, that vast and ruthless megalopolis in B.C.’s southern Interior.

You may wonder how a town of almost 40,000 beach bums and mountain bike warriors qualifies as a ruthless imperial nerve center. 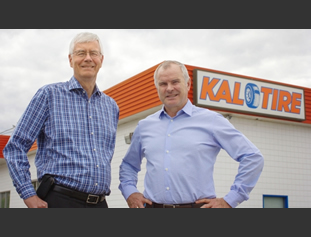 Kal Tire loves the place, that’s why. Kal Tire, which has forged operations in 19 countries, from more than 4,000 meters above sea level in the Chilean Andes down to the baking desert of Western Australia and the steaming rainforests of Ghana.

Canada’s largest independent tire dealer marks its 60th anniversary on June 12 from the agreeable town where it started life.

It’s nice to be loyal to your birthplace. But shouldn’t an outfit with 5,000 employees and $1.3 billion in annual sales be operating from some place with a little more urban ¬omnipotence?

The company gets asked variations on this question all the time, president Robert Foord says with a chuckle. The first glimpse of the northern Okanagan’s beautiful countryside usually stuns the questioners into silence.

“We have people coming here from all over the world, and kind of taking a full day to arrive,” Foord says.

“They get here, take a look around and say, ‘I wondered why you guys are in Vernon but now I get it.’”

“Coming from dust bowl-era Saskatchewan, he thought he’d gone to the Garden of Eden,” Robert says. “There was no way you were going to pry him out of here with a crowbar.”

But as time went by and Kal Tire put down roots in Vernon, it became aware of a deeper reason for staying put: The company saw that pulling up stakes would put its soul at risk.

“If we moved to a larger centre, which could make business sense, we would lose a bit of our identity and small-town values,” says Robert, 55. “Vernon is where our family grew up and it has formed who we are as a company.”

And what is Kal Tire? For one thing, it’s a company at peace with itself.

Founding families of many other companies have split into squabbling factions as the business moved from the first- to second- to third-generation owners.
But the Foords have preserved family unity, thanks partly to the humility, trust and cooperation they absorbed growing up in a small town.

Still, the question of whether Kal Tire should relocate never entirely went away. As the company expanded from its Okanagan base to the Lower Mainland and then into Alberta and Saskatchewan, the debate periodically resurfaced.

“We had these conversations about moving to where our business was,” says Kal Tire chairman Ken Finch. “They’re humorous in retrospect. There wasn’t anybody willing to move out of Vernon.”

And that reluctance wasn’t entirely based on Vernon’s appealing outdoors lifestyle. Finch, who is Tom Foord’s son-in-law, says having a head office in a large city often cuts off a company from its customers.

After all, how many head offices along Vancouver’s Burrard Street keep themselves grounded by having a tire store in front of them, as Kal Tire does in Vernon?

With a next-door presence like that, a company is always reminded why it’s in business.

“There are huge distractions in the city,” Finch says. “The offices in downtown Vancouver are way more disconnected from their real business than you are when you’re located in a small town.”

The company’s appreciation for the value of things small has helped shield it from the willy-nilly drive to expand that often puts over-extended companies at risk.

Kal Tire even includes the principle of controlled, balanced growth in its core seven aims.

“Our rate of expansion will not be beyond our ability to finance or manage to a consistent standard of quality,” the company says.

Finch says the need to seize opportunities for growth sometimes causes the company to grow faster than it should. But it’s always conscious of the need to catch up with itself and nurture the culture of customer service in its new operations, he adds.

In the pre-Internet era, Tom Foord found an ideal way to communicate with Kal Tire’s growing chain of stores: He became a pilot, an activity he pursued well into his seventies.

Running a tire empire from Vernon does have disadvantages. Coaxing people to leave big cities to fill senior staff positions and information technology jobs can be challenging, Finch admits.

But the Okanagan’s beauty is a ¬compelling recruiting tool, he says.

Decades ago, Tom Foord knew he had to hire top talent to help him run the company. He also knew he would have trouble paying the kind of salaries they could command. So he created an executive partnership.

These execs – there are six today – own a slice of the company.

“This allowed Tom to keep control of the company. It also gave him the ability to bring in good people who were looking for a form of ownership to get rewards from the growth of the company,” Finch says.

What will Kal Tire look like in 10 or so years? Reached on his wobbly legs the day after a four-hour mountain bike ride, Robert Foord offers an answer at once predictable and intriguing: The company will stay private and it will stay in Vernon.

Its domestic and international footprint will likely be larger. But that footprint may extend outside the company’s traditional tire business.

The values Kal Tire acquired in Vernon – exceeding customers’ expectations, treating them the way you’d like to be treated – might be extended to other endeavors, Foord says.

“We’ve always taken the position we’re a service organization,” Foord says. “We just happen to sell tires. I could see us in some service-related industry that may not have anything to do with tires.”

The corporate landscape is littered with the wreckage of business families who fought over succession at their company, Bentall says in his book “Leaving A Legacy: Navigating Family Business Succession.”

But Kal Tire founder Tom Foord developed a culture of collaborative decision-making that enabled the company and the Foord family to avoid infighting, Bentall says.

A strategy like this needs “maturity, self-confidence and humility” – qualities Kal Tire’s leaders have in spades, says Bentall, who is also an adjunct professor at University of B.C.’s Sauder business school.

“When Tom Foord retired as president and CEO of Kal Tire, the leadership transition to his son-in-law, Ken Finch, went so smoothly there was scarcely a ripple,” Bentall says.

“Similarly, the transition from Ken to Tom’s son, Robert, was accomplished without acrimony.”

Finch, now chairman, refers to a Kal Tire employment policy applying to all positions that stipulates a job goes to the best-equipped person.

Only if the qualifications of applicants are equal does a family member get the nod, Finch says.

• Foord named the company after Kalamalka Lake near the city.

• Sixty years later, Kal Tire has grown to about 240 stores serving retail and commercial customers. It has stores as far east as Quebec and as far north as the Yukon and Northwest Territories.

• It’s adding six to 10 stores a year through openings and acquisitions.

• The company’s mining tire division operates at more than 150 mine sites in 19 countries.

• The company employs about 5,000 people. Last year, it finished a new corporate office in Vernon. Almost 300 people work there.

• Kal Tire is a private company controlled by the Foord family. Robert Foord, who became president in 2009, is the youngest of five siblings.